Before I get to my main subject, Joe Brolly, I can’t resist commenting on the startling sight in this newspaper. Published: 26 October 2021 Breandán MacCionnaith, now secretary of something called the Garvaghy Road Mayfair Business Centre, in a...
Read More

Like so many others, I have been upset about Sir David Amess. Published: 19 October 2021 I am hoping that the murder of this thoroughly decent human being will have the unintended consequence of shaming those who routinely demonise politicians,...
Read More

For Remainer zealots, the EU can only ever win

At home and abroad, their ignorant dislike for Brexit means they can only ever blindly take Brussels’ side Published: 14 October 2021 The injunction never to play chess with a pigeon is always applicable here,” wrote Kathy Sheridan, a long-standing...
Read More

The names of political parties often don’t convey much information. Published: 12 October 2021 If you were a stranger to Northern Ireland politics, what would you make of the Democratic Unionist Party, the Progressive Unionist Party, the...
Read More

As much as any Pope, President Michael D Higgins believes himself infallible. Published: 4 October 2021 Yet his recent behaviour has had an utterly toxic effect on relationships between nationalists and unionists in this centenary year. It has...
Read More 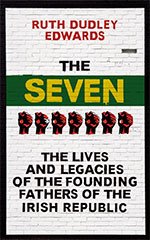 Short-listed for the Orwell Prize.

Aftermath: the Omagh Bombing and the Families’ Pursuit of Justice— published by Harvill & Secker on 2 July 2009. Paperback edition published in March 2012.

Aftermath: the Omagh bombing and the families’ pursuit of justice won the Crime Writers’ Association Gold Dagger award for non-ficton

Ruth was born and brought up in Dublin, was a student at University College Dublin, a post- graduate at Cambridge University and now lives in London. A historian and prize-winning biographer (the James Tait Black Memorial Prize for Victor Gollancz: a biography), her recent non-fiction books include True Brits: inside the Foreign Office, The Pursuit of Reason: The Economist 1843-1993, The Faithful Tribe: an intimate portrait of the loyal institutions (shortlisted for the Channel 4 political book prize) and Newspapermen: Hugh Cudlipp, Cecil Harmsworth King and the glory days of Fleet Street and Aftermath: the Omagh bombings and the families pursuit of justice (longlisted for the Orwell Prize, shortlisted for the Christopher Ewart-Biggs Memorial Prize and winner of the Crime Writers’ Association Gold Dagger for Non-Fiction).

In the 1970s Ruth wrote her first book, An Atlas of Irish History, the third edition of which was published in 2005. Patrick Pearse: the triumph of failure, which won the National University of Ireland Prize for Historical Research in 1978, was reissued in 2006 with a new foreword.

Since 1993 Ruth has written seriously and/or frivolously for almost every national newspaper in the Republic of Ireland and the United Kingdom and appears frequently on radio and television in the Republic of Ireland, the UK and on the BBC World Service. Ruth describes herself as British-Irish and is comfortable with being culturally both Irish and English. See her essay The Outsider published in Britain and Ireland: Lives Entwined II (British Council, September 2006).

Her crime novels satirise establishments.  The Anglo-Irish Murders, her ninth crime novel, is a satire on the peace process, her tenth, Carnage on the Committee, is set in literary London, Murdering Americans, set in the academic world of Indiana, was next and her latest is Killing the Emperors, an assault on the madhouse that is the world of modern art. Read her article on this along with Making Fun of Academics, which she often does.

In the Name of the Son: The Gerry Conlon Story by Richard O’Rawe

Wounds: a Memoir of Love and War by Fergal Keane

The Memoirs of Walter Bagehot by Frank Prochaska

Getting Down to the Bare Bones, Forensics: The Anatomy of Crime by Val McDermid

I’m on the train! by Wendy Perriam

The Long March: The Political Strategy of Sinn Féin, 1981-2007 by Martyn Frampton

The Gathering by Anne Enright

God Save Ulster: the religion and politics of Paisleyism by Steve Bruce

The Silver Swan by Benjamin Black