Proportionate and appropriate, Ms McDonald? I don’t think so 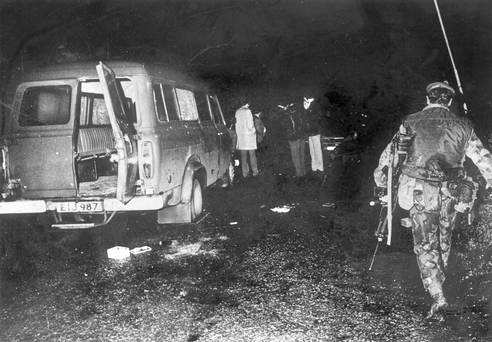 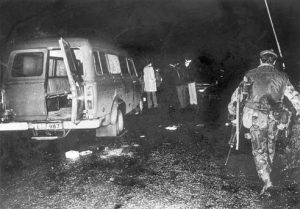 TRAGEDY: The bullet-riddled minibus at the scene of the massacre of workmen shot dead by the IRA at Kingsmill, 1976

Bea Worton is a stoic, as she has needed to be. Born in 1927 in Co Armagh, she was a housewife, mother and grandmother. A product of a non-sectarian school, she and her family got on fine with their Catholic neighbours.

And then The Troubles erupted, tribal hatreds were unleashed, loyalist and republican paramilitaries sought to outdo each other in brutality, and, on January 5, 1976, tragedy came to Mrs Worton.

Her son Kenneth had been one of the 12 workmen on a bus taking them home to Bessbrook from the Glenanne textile factory. There had been talk during that day of the latest horrifying local atrocity: the UVF attack the night before on the Reavey brothers of nearby Whitecross that had killed two and grievously wounded the third. So when their bus was stopped near Kingsmill and gunmen told Catholics to step forward, the two Chapman brothers, fearing for the only Catholic among them, each placed a hand on his arm to stop him doing so. However, when Hughes stepped forward the gunman told him to “Get down the road and don’t look back” as they pumped 136 bullets into the 11 Protestants, 10 of whom died.

The suggestion that this was a rogue IRA unit inflamed by the Reavey attack and three other UVF murders the same night is untenable. There would have been a complex period of planning, assembling manpower and weapons and securing the necessary intelligence.

With most of the IRA leadership in jail or on the run at the time, the army council was dominated by the nakedly sectarian chief-of-staff Seamus Twomey, with the brains provided by the quartermaster Brian Keenan, who, as the late Garda agent Sean O’Callaghan described, believed that “the only way to knock the nonsense out of the Prods is to be 10 times more savage”.

The message to IRA volunteers was that it was okay to kill Protestants in retaliation for the killings of Catholics. And the dozen or so men who killed those textile workers were typical of those who really, really hate Protestants.

Kenneth Worton, a sociable 24-year-old whose friends were mostly Catholics, left a widow, two small daughters and a mother who – like most other relatives – longs for some kind of justice.

The families believe they know who the perpetrators are and would like – at the very least – that the murderers be publicly named. It isn’t that they want to see them in jail: as another bereaved relative, May Quinn, put it: “If they confessed what they did it would be good for them and it would be good for us.”

One of those they are certain was guilty was Raymond McCreesh, who was arrested five months after Kingsmill trying to ambush soldiers with the help of a rifle that had been used in the massacre. He would die in jail on hunger strike in 1981, thus being elevated to the pantheon of IRA martyrs.

It hurts the bereaved that the IRA has refused to admit its responsibility. It hurts even more that Sinn Fein leaders eulogise murderers on a regular basis.

It is deeply upsetting when republicans essentially thumb their noses at victims, as, for instance, when they used their dominance on the local council to have a children’s playground named after McCreesh. And what is unendurable is that all this sectarian provocation is accompanied by sanctimonious lectures from Sinn Fein about respect and equality.

It was Bea Worton who launched a judicial review when the Equality Commission outrageously ruled that the council had followed all equality requirements in the park-naming scandal. The Commission backed down in a mealy-mouthed way but Sinn Fein – with collusion from the SDLP – are still intent on keeping McCreesh’s name in place.

One result of this was to make Mrs Worton a hate-figure for some republicans. She didn’t want to worry her family so she hadn’t told them until recently that before Christmas she was getting abusive calls “asking for 10 slices of Kingsmill bread for toasting”. That, alas, is typical of a particularly barbaric kind of paramilitary humour. West Tyrone MP Barry McElduff, an enthusiastic eulogiser of IRA gunmen, explained in a blog apropos the playground that McCreesh was “a hero and a martyr” who deserved a Nobel Prize more than many of its recipients.

McElduff, who likes entertaining his republican base with comedy acts, then played to his gallery on the 42nd anniversary of Kingsmill by posing for that infamous video showing him with a Kingsmill loaf on his head. He is a tribal leader who knows little of unionists – though he obviously despises them – so it is possible that he was so focused on amusing his own followers that he forgot that outsiders would find the joke utterly appalling. I have yet to come across anyone who believes his protestation that he had never “imagined for a second any possible link between product brand name and Kingsmill Anniversary”. Even Sinn Fein obviously didn’t.

However, the republican leadership obviously have no grasp of how disgusted people are by this. “Depraved” is a commonly used description of it, North and South. When you lack a moral compass yourself, you can get lost easily. In 2013, TD Peadar Toibin was suspended by Sinn Fein for six months for voting against instructions on a matter of conscience to do with abortion. McElduff is suspended for three months on full pay and the future president of Sinn Fein, Dublin 14’s Mary Lou McDonald, tells us that this is “appropriate and proportionate”.

It isn’t, Ms McDonald. It’s further evidence that Sinn Fein is morally bankrupt. What a contrast with the 90-year-old great-great-grandmother, Mrs Worton! “The fact that they are doing this to me makes me think that they have something on their conscience which is making them try to hurt me,” she said, “but I won’t let them do that… I get strength. I pray for it and that’s that”. Now there is someone worth eulogising.