Last Tango with Adams recalls a dance of death 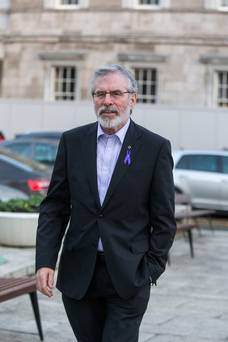 Gerry Adams may have been taking the floor, but Sinn Fein’s other moves are not looking smart, writes Ruth Dudley Edwards 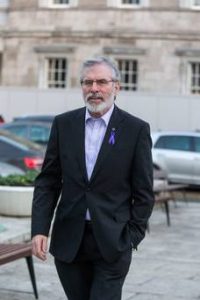 “Last Tango in The Balmoral,” began a tweet from Gerry Adams on Friday, attaching his most recent blog, which appears weekly in Sinn Fein’s remaining Pravda (An Phoblact is now on-line only) – the Anderstonstown News – describing a dance he had had with Michelle O’Neill, now known as the “Leader of the North” – a title the Master Blogger Mick Fealty describes as “a bit Game of Thrones.”

Of all the recent articles suggesting that Sinn Fein is losing its way since Martin McGuinness died, the one that must have been most worrying for the leadership came from Denis Bradley.

A commentator who for decades has worked to improve the lives of the people of Derry while making a distinguished contribution to cross-community initiatives, he would love a united Ireland, so he can’t be dismissed as a West Brit.

Bradley wrote of a party unprecedentedly “nervous and unsure of itself,” and not knowing whether to do – or continue to scupper – a deal with the DUP.

Lacking McGuinness’s ability “to understand and articulate the emotional mood not just of his own party but of the nationalist constituency,” said Bradley, the party has been frenziedly holding meetings across Northern Ireland asking for advice, while repeating the mantra, “No return to the status quo”.

But at those meetings, there was no sign of “self-reflection,” let alone “self-criticism”.

He attributes this to the “consciousness, maybe the sub-consciousness, of being solely responsible for the unification of Ireland.” That sense of mission was what had given Sinn Fein its fervour and discipline, but also its poor relationship with other nationalist parties. The incestuousness that made it appoint only insiders as advisers made it ineffective in government and prone to projecting “haughtiness and superiority”, with “some” (I’d say many) members “confused between the primacy of the party and its primary purpose”.

Bradley laments that with Brexit and changing demography, unionism might contemplate an agreed Ireland and island-wide, nationalism is ready to be “adaptable,” yet ”the political party which sees itself as primarily responsible for unity is convincing itself that its job is to put manners on the DUP”.

He wonders where “is the sense of priorities to know that the awkward, stubborn and fearful unionist people are key to the debate and to the settlement of an agreed Ireland?”

And where is “the statesmanship to know that this is a time for generosity and flexibility?”

What Bradley doesn’t say is that the party is in the sclerotic grip of sectarian tribalists. When he stuck that Kingsmill loaf on his head, Barry McElduff, MP for West Tyrone, a notorious cheerleader at IRA commemorations, was giving a nod to the kind of republicans who painted “Kingsmill HA HA” on an Omagh wall to indicate their support for sectarian terrorism.

Ben Lowry, deputy editor of the unionist Belfast Newsletter, wrote last week that the revulsion expressed over Kingsmills had made no difference to the Sinn Fein determination to continue brainwashing the young into believing “that decades of bloodshed, that greatly deepened the trenches in Northern Ireland, was reasonable”.

There “is not a hint of regret or embarrassment at the overall IRA campaign, which was riddled with atrocities against civilians.”

Had people any indication that republicans “had even some humility about the past,” he said sadly, “things could be so different.”

But they haven’t. “They crow and celebrate, which is bad enough, but then, worse, sneer and demand accountability of others.”

Steeped in Christian teaching, Ulster Protestants are quick to forgive the repentant. Sean O’Callaghan, who in the 1970s was part of a mortar attack that killed a young woman in the Ulster Defence Regiment and who murdered a member of the RUC in cold blood, spent his later life atoning and was embraced and honoured by unionists. But with Sinn Fein, they see the new generation of leaders enthusiastically extolling the terrorists of the past.

Now back to Adams and his whimsical tango. “Michelle jumped up, swung into my arms and we were off. Ted and Gerry Kelly have always been jealous of my moves on the dance floor. With good reason. Michelle and I floated around the hotel foyer like gossamer shadows caressed by the wind. Mary Lou and Elisha looked on enviously.”

The selection of names is deliberate. Ted Howell is Adams’s key strategic adviser since IRA days and one of the revered hard men.

Gerry Kelly is an IRA celebrity, having among other crimes bombed the Old Bailey and shot a prison warden in the head as he escaped from jail. Mary Lou we know. Elisha McCallion MP raised the roof at the last Sinn Fein Ard Fheis when she described McGuinness as “a proud member of the IRA”.

There’s various kinds of guff about the great work the party has to do to get into government in Dublin and transform lives. “Just, if the terms are right, as we do in the North.”

Of course, he says, this is also about achieving Irish unity, which Sinn Fein can best do “if we are in government north and south”.

Will they do a deal? I guess even Ted doesn’t know the answer to that one?