No one in their right mind would ever envy Mary Lou 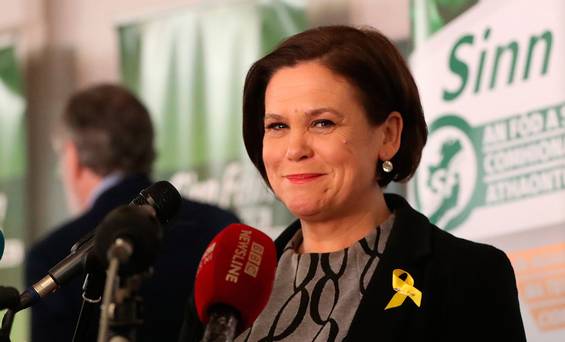 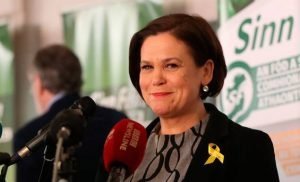 In normal political parties almost everyone wants to be leader. But how many senior people in Sinn Fein truly envy Mary Lou McDonald as – in theory at least – she takes control of the morass that is the island-wide party? The presidential chalice may be shiny but the contents are toxic.

Obvious rivals like Pearse Doherty and Matt Carthy don’t seem to have put up any resistance to her being crowned unchallenged by Gerry Adams. Still, she is clever, articulate, tenacious and ruthless and has been the heir apparent since she was unopposed for the deputy leadership in 2009, so they must have known her getting the job was inevitable.

She’s been Adams’s protegee since she jumped ship from Fianna Fail in 1998. He saw the arrival of a clever, articulate, well-educated, middle-class Dubliner with no IRA baggage for the gift she was, and gave her every chance to shine. In exchange, she gave him unquestioning fealty and has passed loyalty tests that would have revolted most people. Did she ever think of refusing when in 2003 she was told to make a speech alongside IRA army council mass murderer Brian Keenan in honour of Sean Russell, IRA chief of staff and Nazi ally, who died on a U-boat in 1940?

Did she have qualms when yet again she had to endorse one of Adams’s preposterous denials with an unblinking “I believe Gerry”?

Or protest when instructed to defend U-turns over such issues as coalition? (“Never”, then “never unless Sinn Fein is the bigger party” and now pursuing a junior partnership.)

McDonald has so much self-confidence that she often strays into sheer effrontery, but even she must be daunted by the scale and seriousness of the problems she’s facing. There is, for instance, the little question of how much freedom she will be given by Gerry and the elderly boys in the Belfast backroom.

They dictate the strategy of the republican movement, and they won’t be rushing to cede power to a posh graduate brought up in what they still loathe as the Free State. As always, she’s curried favour with them by her assiduous attendance at events commemorating IRA terrorism. As president-elect of Sinn Fein, she sent a clear message when she attended a wreath-laying ceremony in Castlewellan, Co Down, for an IRA member who died in 1972 when the bomb he was planting at the police station exploded prematurely.

So although the polls suggest she might turn off fewer voters than Adams, she is still damaged by the recognition that – as Gerard Howlin described her neatly last week in the Irish Examiner – although “in civilian clothes… she was a good soldier”. It’s a telling phrase which Micheal Martin used to explain why Sinn Fein’s questionable commitment to democracy and defence of “the indefensible” made coalition with Fianna Fail out of the question. “Mary Lou McDonald,” he said starkly, “is a prisoner of the Sinn Fein narrative of its recent past.”

Leo Varadkar was almost as uncompromising when he said Sinn Fein’s positions on the economy and the EU made it “unfit for office”. Now Sinn Fein has shown both North and South that it will readily change its policies according to the direction of the electoral wind, but the Taoiseach took it further, describing the party as “nationalist… sometimes even sectarian”. He offered a little hope, though, adding: “I think it would be welcome if the new president of Sinn Fein was to bring about a clean break with the past, particularly the ongoing celebration of violence by Sinn Fein at commemorations.”

But how could she sell that to her friends in the North? Despite there being abler colleagues, Adams was able to impose Michelle O’Neill as party leader there and crown her vice-president by emphasising her family’s impeccable IRA pedigree. He wanted someone malleable, and a young woman suited the optics. But the fact that while she ploddingly reads out speeches and statements about the need for reconciliation, she honours people like the Loughgall psychopaths – who murdered dozens of their neighbours in the border areas before being killed by the SAS – is not a way of inspiring trust.

People in the Republic would be impressed if under the new regime a deal was done with the DUP. But Adams’s insistence on ridiculous red lines justified on human rights grounds has painted the party into a corner. He has also painted the DUP into a corner. If it yields on an Irish Language Act that wastes state resources and involves positive discrimination for Irish speakers in the public service, the Ulster Unionist Party, which opposes it root and branch, could have an electoral bonanza.

Then there are horrendous problems concerning party discipline. The Barry McElduff affair cast an unhelpful light on people who conceal their own sectarianism as they accuse unionists of bigotry. Is it helpful that Assembly member Alex Maskey, a one-time Belfast mayor, recently described Northern Ireland as a “putrid little statelet” – not least when you consider the inconvenient truth that Northern Ireland Catholics had a much better deal in education, health and welfare than their southern counterparts? Was it not foolish for Declan Kearney, party chairman, outrageously to claim IRA credit for the civil rights movement – causing the SDLP and the UUP to erupt as one in their angry condemnations of blatant lies.

Then there’s the matter of the haemorrhaging of 10pc of elected representatives in the Republic since 2015, citing bullying, intimidation and smear campaigns. And the leaking of Kearney’s ban on members speaking to any journalist on any internal party matter on pain of “disciplinary action”.

Such authoritarianism still largely works in Northern Ireland, but much less so with young idealists in the South who didn’t understand the kind of party they joined, were horrified by the suppression of dissent and want to talk about it. President McDonald’s in tray runneth over!