I’d have chained myself to the railings to win the vote. But pardoning suffragettes who broke the law is crazy 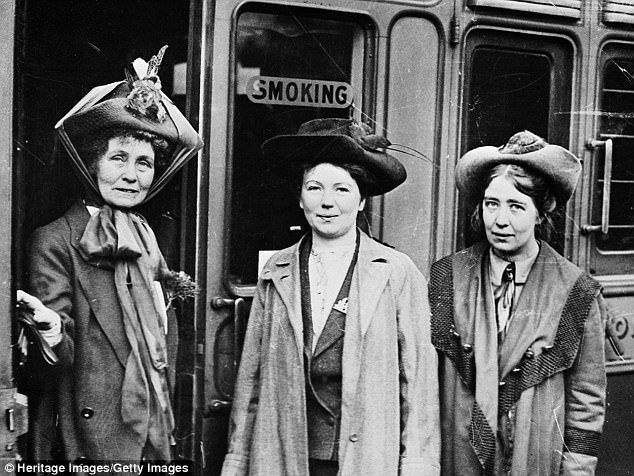 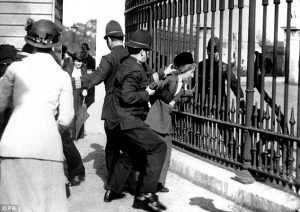 Jeremy Corbyn yesterday announced that, if he becomes Prime Minister, he will issue an official apology and posthumous pardon to all convicted suffragettes.

Mr Corbyn isn’t one for detail, but I would like to know if this will include those women who resorted to violence, who set fire to buildings, set off bombs and who physically attacked MPs, police and anyone else who opposed them.

Unfortunately, the temptation to jump on the bandwagon — and to signal one’s virtue — seems to have extended to the Home Secretary, Amber Rudd. Taking part in Radio 4’s Today programme celebration to mark 100 years since (some) women got the vote, she too seemed to think she could find a way of pardoning the imprisoned women.

But at least in her case, it was only those women who had got caught up in protests and who hadn’t actually damaged anyone or anything.

As I listened, I found myself wondering if this business of messing about with our past in the light of our present could get any crazier.

Don’t get me wrong, last night I drank a toast to mark this centenary. Had I been around at the time of the suffragettes, I’m sure that I would have been one of those who chained themselves to railings.

I hope, though, that I would have realised that Emmeline Pankhurst was nothing more than a militant rabble-rouser, and that Millicent Fawcett, the long-time suffragist who opposed violence, was the woman to follow. Certainly, most women at the time would have agreed with me. Mrs Fawcett’s National Union of Women’s Suffrage Societies had 100,000 members: Mrs Pankhurst’s Women’s Social and Political Union had 10,000.

I believe that Fawcett’s long and patient campaign educated public opinion, while the man-hating Pankhurst’s endorsement of violence lost the support of many men. 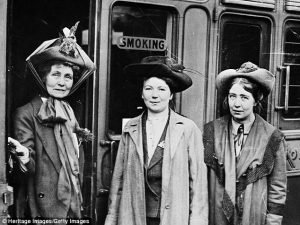 Emmeline (left), with her daughters Christabel (centre), and Sylvia Pankhurst, (right), pictured at Waterloo Station in 1911

Mrs Fawcett believed that the cause of extending the franchise to women had to take account of the aspirations of five million working-class men denied the vote as well as middle-class women.

But Mrs Pankhurst was a snob, and her equally bigoted daughter Christabel was so extreme that she wrote in 1913 that men were ‘little more than carriers of venereal disease’.

I was a feminist long before the term was hijacked by half-witted, ignorant, angry activists who want to send us back to the Victorian era when women needed smelling salts if anyone said anything we thought offensive.

And I was brought up in a proud feminist tradition. My father, born in 1909, was wheeled about in a pram from which he waved a flag with the legend ‘Votes for women’.

My mother, a scholarship child who worked for a living all her life, ground it into me that women should be economically independent.

At home, my brother was expected to help with the housework just as much as his sisters did.

An academic and a teacher respectively, in an Ireland where the dominant Roman Catholic Church liked women to be subservient and pregnant, my parents encouraged their female students to aspire and succeed. 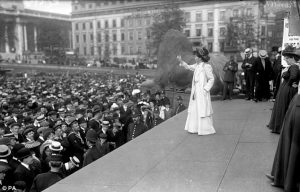 Emmeline Pankhurst addresses a crowd at Trafalgar Square in 1909. The Representation of the People Act 1918 gave some women over 30 the right to vote

All my life I’ve sought to build on that and expand boundaries for women. But I’ve believed in doing so through persuasion, not aggression.

I like men, and throughout my life they have helped and encouraged me, but they can be clumsy when it comes to women’s concerns.

I remember when the Conservatives in the late Sixties produced a policy document called Fair Shares For The Fair Sex which recommended the removal of discriminatory policies when it came to women applying for mortgages and hire purchase.

I was irritated by the patronising tone, but having read it and realised that a lot of good male Tories were fighting our cause and that the policies would improve our lives greatly, instead of being cross, I laughed at the title and men laughed with me.

But to return to Mr Corbyn and the campaigners who are pushing for a pardon for the suffragettes, this idea that we constantly have to apologise for past deeds is absurd.

Tony Blair started the rot. I cringed when, to curry favour with the IRA, he apologised for the Irish famine of the 1840s.

As far as Gerry Adams & Co were concerned — people who have justified every IRA atrocity there’s ever been — the then prime minister had done nothing but show his weakness and give them ammunition for their campaign to have the famine classified as genocide. The famine was the result of a sequence of horrendous potato crop failures in overcrowded landholdings which the government of the day tried, but failed, to resolve — much as well-meaning governments still fail in famines all over the world today.

It was typical of Mr Blair to apologise with a quavering voice for something he hadn’t done, while resolutely refusing to apologise for his own errors of judgment over matters such as lying over the reason we went to war in Iraq.

Then we had Gordon Brown taking it a stage further with pardons for all British soldiers shot for desertion during World War I, regardless of whether they were guilty of cowardice or unjustly condemned.

In 2013, the pardoning of the mathematical genius Alan Turing — to whom we owe so much for his work at Bletchley Park helping to decode Nazi messages during the war but who was persecuted for his homosexuality — was another politically correct and misguided interference with the past.

Three years later, we had the mass pardoning, under the so-called ‘Turing Law’, of gay and bisexual men punished for now abolished sexual offences. 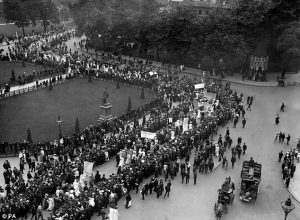 A suffragette procession is pictured passing through Parliament Square in 1908. It was not until 1928 that men and women were given equal voting rights

Where do we go next? Pardon the 19th-century unfortunates hanged for sheep-stealing? Grovel to Nicola Sturgeon for forgiveness over Elizabeth I dispatching Mary Queen of Scots to the executioner’s block?

Cave into the mad demands of the Rhodes Must Fall campaign to tear down statues of historic figures we don’t today approve of? Why can’t we get it into our heads that it’s daft to judge the past by the standards of the present?

As our present Queen put it in 2011 in a speech during her stunningly successful state visit to Ireland, where the IRA had murdered her cousin and Prince Philip’s uncle, Lord Mountbatten: ‘With the benefit of historical hindsight we can all see things which we would wish had been done differently or not at all.’

Let us by all means explain to our children that we’re much kinder these days than we used to be, but in the same breath that there’s nothing we can do about the past except try to be better.

At least sense has prevailed in the decision to honour Millicent Fawcett rather than Emmeline Pankhurst with a statue in Parliament Square.

I do, however, deeply regret that the authorities haven’t yet had the guts to put Margaret Thatcher there. There was a woman who fought her way up without fear or favour, and who proved by her words and deeds that she was the equal of any man.

She certainly would have scoffed at the idea of apologising for anything for which she was not responsible.

It is a shocking condemnation that she hasn’t earned the honour she so richly deserves because she isn’t the ‘right’ kind of feminist, and would therefore be a target for violent bigots.

Building on what the suffragettes achieved and becoming the first British female prime minister — a woman who changed the world for the better, not least by helping finish off the Soviet Union — appears to count for naught.