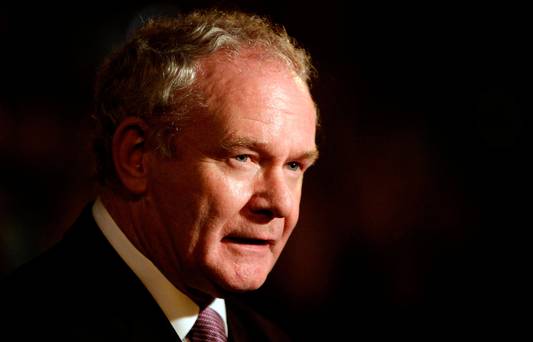 Martin McGuinness was a bad man and we need to tell the truth about him, says Ruth Dudley Edwards 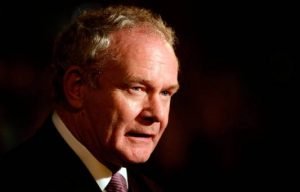 As well as the kerfuffle about embarrassing comments from anti-IRA clergy in newly released State papers, there was a row last week about the T-shirt for sale by the Sinn Fein online bookshop bearing the legend ‘IRA UNDEFEATED ARMY’ and illustrated with images of dashing young chaps in balaclavas carrying Kalashnikovs.

“A tribute to the men and women who led the struggle against British occupation of Ireland,” they’re available for €20 – quite a bit cheaper than the limited-edition reproduction of a portrait of Martin McGuinness, which is going for €600.

McGuinness’s funeral last year was attended by President Higgins and US ex-president Bill Clinton, who were among those extolling him as a peacemaker. Yet they knew well that McGuinness – the republicans’ favourite deceased terrorist – was certainly personable and, when he wanted to be, courteous and diplomatic, but that he was an unrepentant mass murderer and congenital liar who, until his death last year, was one of the IRA veterans running the republican movement.

Edward Daly, the one-time Bishop of Derry who fingered McGuinness to the Irish Government for murder, got him right many years ago, when he said that in many ways he was “exemplary” and “honest and upright in his personal conduct”. His only quarrel with him “was with the legitimacy and morality of using violence for political purposes”.

Unlike many of his ecclesiastical colleagues, Bishop Daly, however, was no romantic. As he said once in an interview with Patsy McGarry about the carnage he witnessed on Bloody Sunday, “when you see what a high velocity bullet does to the human head, any romantic ideas about violence you have go out the window”.

Throughout his time as Bishop of Derry, he had little communication with the IRA, “except for exchanges of artillery, shot through the local media”.

Daly was sickened in 1986 by the story he heard from the family of Frank Hegarty, a Derry Provo quartermaster, who had given information about a dump of Libyan arms and then fled the country. McGuinness convinced Hegarty’s mother and then Hegarty that he would be safe if he came home: he then organised his murder.

A hitherto secret file records Daly telling an official a few months later that McGuinness was a Provo Chief of Staff and that “far from using a henchman (as he would ordinarily do)”, he had personally arranged the rendezvous with Hegarty which led to his interrogation and murder.

For Irish people who are relaxed about the murder of informers, here’s a reminder about Patsy Gillespie, a Catholic army cook at an army barracks who became one of McGuinness’s “legitimate targets” when he was seeking a proxy bomber.

It was he who ordered the IRA to take Gillespie’s family hostage, strap him into a van full of explosives and order him to drive to an army checkpoint. After the bomb was detonated, there were five dead soldiers: and all that was left of Gillespie was half a hand.

Conducting his funeral, Bishop Daly said the IRA had “crossed a new threshold of evil… some of them may even still engage in the hypocrisy of coming to church, but their lives and their works proclaim clearly that they follow Satan”.

The McGuinness at whom Daly was aiming this was a cold-hearted mass murderer who is marketed by Sinn Fein leaders as a role model for the innocent young who are told he left the IRA in 1974 and thereafter dedicated himself to the achievement through democratic means of equality and reconciliation.

For those in the know, this is lies from start to finish, for he never left the IRA, was obsessed with forcing a united Ireland and didn’t care tuppence about equality until it suited republicans to use the concept as a useful political weapon.

When Mary Lou McDonald, that mistress of sanctimony, unveiled the tombstone to “Oglach Martin McGuinness, Oglaigh na hEireann, MP, MLA, Minister”, whom she described as “a faithful son of Ireland”, she burbled about peace but for the faithful she was signalling her endorsement of a man who had died still regarding the IRA as the rightful armed forces of the Irish Republic ­- of which she aspires to be Tanaiste and, in due course, God help us, Taoiseach.

The republican faithful have no problem with that. In fact, quite the reverse. They think it’s gas the way McGuinness pulled the wool over the eyes of the naive. Elisha McCallion, MP for Foyle, McGuinness’s own constituency, was reported during the Sinn Fein Ard Fheis as having got “the loudest cheer of the weekend so far when she says McGuinness was a proud member of the IRA”. And Michelle O’Neill, Gerry Adams’s puppet in Northern Ireland, extols the “Martyrs of Loughgall” – aka the eight men of the East Tyrone Brigade who having murdered 40-50 people in Tyrone and Fermanagh, died in 1987 at the hands of the SAS as they were delivering 200lbs of explosives to an army barracks.

The Bishop of Clogher thought their leader, Jim Lynagh, a “madman” and the highly respected Father Faul passed on the rumour that they had been set up by Gerry Adams because they dissented from his political strategy.

For what it’s worth, I don’t think that rumour was true, but it horrifies me that this murder gang is lauded by Michelle O’Neill as dedicated “Irish patriots” who “laid down their lives in the just cause for peace and Irish freedom”.

If you’re contemplating voting Sinn Fein, maybe you might just have a think about whether you’re happy with the role models the party offers the young.

Aren’t they supposed to want peace?