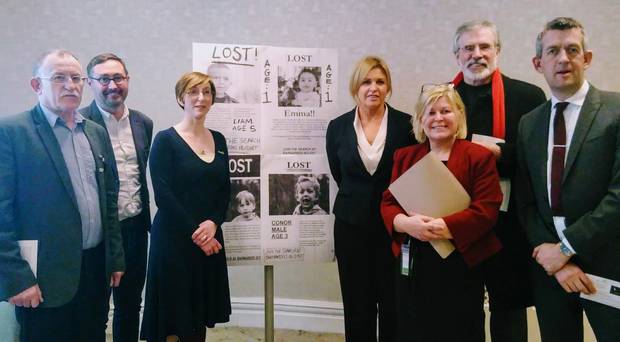 What was charity thinking, considering the number of children to die at hands of republicans, asks Ruth Dudley Edwards 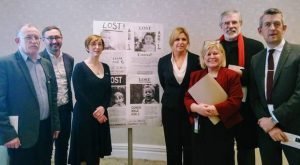 Last week, Barnardo’s Ireland issued a happy tweet along with a smiley photograph: “Great to have so many@sinnfeinireland members in with us to talk about our new LOST Childhood Campaign”.

Quinlivan has IRA baggage from his brother Nessan’s period as a Provo prisoner.

Ex-convict Ellis has a colourful history as a terrorist, including the embarrassment of having his fingerprints found on a massive cache of explosives linked to, among others, the Hyde Park bombers.

Adams, of course, as we all know, was never in the IRA, but despite the best efforts of his busy lawyers to overturn them, he still has convictions for attempting to escape prison when interned.

The purpose of the Barnardo’s campaign is to draw our attention and our money to helping children “lost to homelessness, to poverty and to neglect”.

And they’ve been publishing a sequence of photographs of a Barnardo’s employee with supportive politicians.

Like everyone else, I make many mistakes, but I struggle to grasp how an experienced charity got this so very, very wrong.

There has been a barrage of incredulous, distressed or angry messages, accounts of children murdered, injured, orphaned or rendered destitute by republican violence, and plenty of protests about the organisation’s insensitivity and stupidity.

Alan Mc, a tweeter, put the popular message pithily: “Is this some kind of sick joke? Adams is a paedophile protector in both his own family and in the murderous organisation he directs which, you complete and utter idiots appear not to know, killed many times more children than all the other participants in the violence.”

“How many ‘Lost’ childhoods were the murderous Sinn Fein/IRA responsible for?” asked another. “This is akin to animal rights activists campaigning for the rights of chickens and taking along a fox for support.”

“I have read through the comments and you must now realise your catastrophic error and lack of moral judgement here. Will you please make a public apology and then distance yourself from these evil people?” said a third.

While there were some supportive comments, they were overwhelmingly negative. I can understand that since Barnardo’s was trying to get politicians to back its campaign, it had a problem.

Sinn Fein is in theory a democratic party and would be difficult to exclude out of hand.

But surely the charity could have asked at the very least that no representatives from political parties have prison records or be linked to scandals, particularly those linked to child abuse?

That would have taken out Messrs Adams and Ellis, and the other four wouldn’t have raised too many eyebrows.

Then there’s the mystery of why it appears not to have faced up to the criticism and many threats to withdraw financial support by making a straightforward public apology.

If it’s lurking somewhere on the net, I can’t find it.

Another interesting question is why Sinn Fein decided to enrage a vast body of people by including two such notorious TDs.

In searching vainly for a reaction from Fergus Finlay, Barnardo’s Ireland’s chief executive, I came across an article of his from 2016 where he was putting the negative as well as the positive case for Mr Adams.

“He doesn’t talk to us and he doesn’t listen to us,” he wrote.

“He talks only to his own, and he takes instruction (if he does take instruction) only from his own. Nothing else has ever mattered to him.”

That is very true.

It’s rather like Barry McElduff and the loaf of Kingsmill bread.

If you’re obsessed with keeping your core supporters happy, you will send private signals and make private jokes to them.

What better than to have a snigger over compromising the well-meaning useful idiots in Barnardo’s Ireland?