Beware puppetmaster Martin Selmayr, who is now pulling the strings of Europe 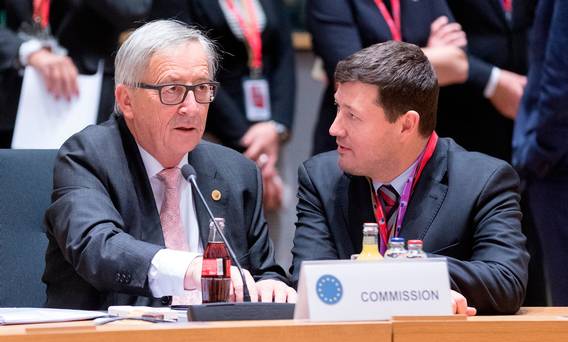 With the help of the obedient Jean-Claude Juncker, Selmayr has staged a coup, writes Ruth Dudley Edwards 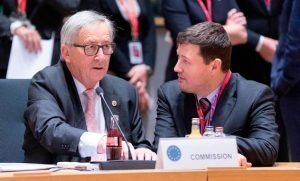 ‘Faceless bureaucrats” is a frequent insult levelled at our rulers in Brussels but, latterly, we’re getting to know them better. What with his tendency to over-enthusiastic conviviality and entertaining outbursts, Jean-Claude Juncker, the president of the Commission, is a star of many a YouTube clip.

The name of Michel Barnier – who has moved smoothly between French cabinets and EU jobs, and who was one of Juncker’s special advisers when his boss appointed him “European Chief Negotiator for the United Kingdom Exiting the European Union” – these days trips approvingly off the tongues of Irish nationalists and British Remainers, while being anathema to Leavers and EU reformers.

The Belgian Guy Verhofstadt, the European Parliament’s representative on Brexit, may be deeply unpopular in the United Kingdom but has been saying all the right things to Irish nationalists to stir the embers of Anglophobia.

Donald Tusk, one-time prime minister of Poland and now president of the European Council, has been vaguely seen as more reasonable than other Brussels voices, but increasingly he is demonstrating his belief that European integration is the answer to Euroscepticism. When he cries “Ireland first”, he is following the strategy of derailing Brexit by appearing to oppose a hard border while blocking and mocking attempts to find technical and other solutions that would keep it invisible.

However, until recently, few have known much about Martin Selmayr, Juncker’s puppet-master, a Eurocrat’s Eurocrat, who has just sparked off a revolt in Brussels over a shameless power grab.

Known to the cognescenti variously as Machiavelli, Rasputin, or the Monster of the Berlaymont (EU HQ), this brilliant, ruthless 47-year-old German lawyer was known to be Juncker’s puppet-master, driving him forcefully in pursuit of an EU with a federalist political agenda driven from the top.

Already a powerful Brussels insider, Selmayr was a key figure behind the scenes when, in 2014, the EU parliament defeated the council in a battle for the right to choose the head of the commission. A new procedural arrangement known as spitzenkandidat (lead candidate) essentially gave the job to the candidate of the largest pan-European political group. That was how the wholly unqualified and unfit Juncker, who had been prime minister of the tiny Luxembourg tax haven, was forced upon unwilling EU leaders through the machinations of Selmayr, his campaign manager. Juncker goes next year, and Selmayr wanted to ensure he is succeeded by someone equally obedient. (Barnier is thought to be his favourite candidate.) So he organised a coup which is now being spoken of in hushed tones in EU circles as being worthy of House of Cards.

Jean Quatremer, the veteran EU correspondent of Liberation, a centre-left French daily newspaper, who is loathed by the press-hating commission for his assertiveness, tenacity and integrity, was one of the furious journalists who has pieced together the sequence of events.

At 9.30am on February 21, he wrote last week in The Spectator, 1,000 journalists were sent an email announcing a 10.30am press conference with Juncker – a notoriously rare event. At the same time, Juncker called EU commissioners to a meeting to choose between the two nominees for the vacant post of deputy secretary-general of the Commission: Selmayr and Clara Martinez Alberola, his deputy. There was, however, no contest, as Alberola withdrew and Selmayr was instantly appointed. This gave him the necessary civil-service status to be eligible to be secretary-general, a post in the president’s gift.

No one had known that the low-key incumbent, Alexander Italianer, was leaving, and Juncker subsequently announced to the press Selmayr’s immediate appointment to the top job – putting Germans as the head officials at three out of four great European institutions. There was incredulity and anger and the Commission spokesman had a mauling, but Selmayr was unperturbed.

Now with Alberola again as his deputy, within a couple of weeks he had sent out a letter to his 33,000 staff explaining that the civil service “must not be satisfied with being the machine to run our institution”, which, as Quatremer observed, “is odd, given this is exactly what the Commission is supposed to be for”.

The civil service, explained Selmayr, would act “as the heart and soul of the Commission” – which Quatremer reckons reduces the role of the 28 EU Commissioners “to mere extras”.

The EU Parliament is debating this tomorrow. Ireland should be very careful. The widely held view of seasoned EU watchers is that we are being used by Brussels as a weapon to defeat Brexit and thus terrify any other member countries contemplating defection. If Ireland doesn’t follow orders, the imperialist commission will set out to bully it into submission as it did Greece, and as it intends with Hungary and Poland and almost certainly the insubordinate Italian electorate.

As Scottish commentator Gerald Warner put it on the Reaction blogsite, Ireland has surrendered its hard-won sovereignty and “is now governed by the New Ascendancy. Europhile, rich, secular and ‘liberal’, a new elite controls Ireland in the interests of a foreign power, just as the old Ascendancy did”. He sees this elite as committed to imposing a “globalist culture,” and driving the abortion referendum and the policy of population growth through large-scale immigration recently outlined in Project Ireland 2040.

Will we just follow orders, or now that we know the terrifying and implacable face of the most important person in Europe, is there a chance we might have a serious debate about the kind of EU we want?