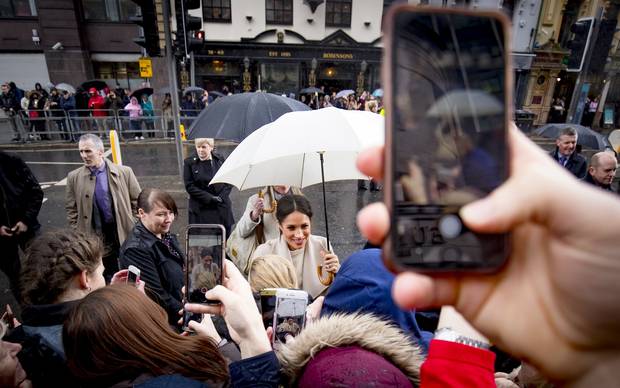 ‘A princely marriage is the brilliant edition of a universal fact, and, as such, it rivets mankind,’ is a quotation from a constitutional expert, Walter Bagehot, writing in 1863 about the wedding of Prince Harry’s great-great-great grandfather.

The man who became Edward VII was marrying Alexandra, a beautiful Danish princess who became immensely popular with the British public.

As I write this, 155 years on, Prince Harry and Meghan Markle have been wowing more than 2,500 young people at the Eikon Exhibition Centre, as well as a random collection of bystanders in Belfast fascinated by an unlikely romance between an ex-soldier and an American TV star.

Generations of royals have come and gone, and innumerable writers, politicians and activists have agitated for the abolition of the monarchy on the grounds of equality and fairness, but the words of the great writer Walter Bagehot are as relevant as ever.

As well as being the editor of The Economist, a banker and a writer full of insight on government, society, literature and all manner of other mid-Victorian preoccupations, Bagehot understood human beings.

He pointed out the simple truth that to many a marriage is a lot more interesting than anything to do with government.

It might seem very childish that the English were so enthusiastic about the marriage of the Prince of Wales, he said, and treated it as a great event, “but no feeling could be more like common human nature as it is, and as it is likely to be”. Despite the best efforts of totalitarians and social engineers, the British public insist on liking the monarchy and enjoying sharing many of the family’s dramas, hopes and fears.

The royals have a genius for reinventing themselves, often through the importation of young brides and bridegrooms who bring new blood and fresh ideas that rejuvenate a sometimes creaky, and occasionally scandal-riven, institution.

Queen Victoria’s Prince Albert and the present Queen’s Prince Philip were highly intelligent modernisers. Queen Alexandra, like the late Queen Mother, Princess Diana and the future Queen Catherine, the first middle-class recruit, had glamour and the common touch. And now, in a celebrity-crazed time, a clever, confident, beautiful American TV star arrives to up the ante.

What’s more, William, Harry, Kate and Meghan can express the preoccupations of the young in contemporary language.

Where Prince Charles, like his parents, has favoured reticence and the stiff upper lip, Princess Diana won hearts by projecting vulnerability and empathy.

Now the latest additions to The Firm address and share the anxieties of a new generation.

Harry had launched the peace-building initiative Amazing the Space last autumn. This time he was telling the young what they wanted to hear: that the old had made a mess of things which could be cleared up by the idealistic young.

“Clean the slates, guys. You got this.”

He also put into contemporary words the pull-your-socks-up approach of his hard-working family: “the door is open and you just keep pushing at it”.

They were going with the tide now, he added. “Keep it up!”

The left-wing media keep predicting the imminent collapse of the monarchy.

But with Harry and Meghan attracting cheers in all parts of the United Kingdom, it is, at least for now, the republicans who find themselves swimming against the tide.

Ruth Dudley Edwards is the editor of The Best of Bagehot