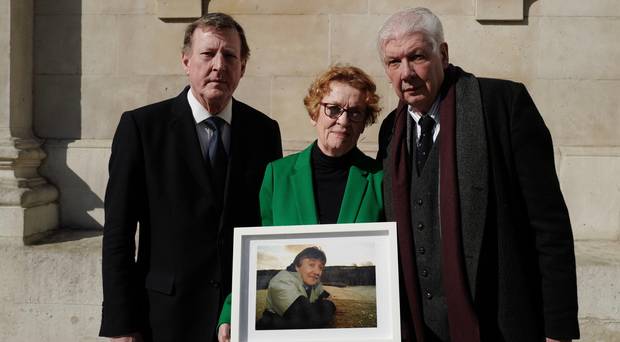 The first song from the choir last Wednesday at the “Service of Celebration and Thanksgiving” for IRA-murderer-turned-Garda-agent Sean O’Callaghan, was ‘Soldiers of ’22’ – an impassioned tribute to the losers in the Irish civil war.

It was written in 1962, not long before his death, by Brian O’Higgins, a veteran of the Easter Rising and civil war, a devout Catholic, and an utterly uncompromising republican propagandist who despised the Free State and its “partition and usurping parliament”.

Full of the rousing, near-blasphemous, rhetoric that sanctifies murder in the name of Irish republicanism by eulogising the killers and ignoring their victims, like most rebel songs it longs for the next generation to follow in its violent footsteps.

‘They were true to our right, they fought the fight,/And they rest in the peace of God./Lift up your hearts, O, brave young men,/And march in the ways they trod!’

With support from Sean’s family and friends, the writer Douglas Murray and I were the organisers of Sean’s service, which in his will he had asked should be in his neighbouring church, the beautiful 18th-century St Martin-in-the-Fields in Trafalgar Square.

It was with some trepidation that we explained to Sam Wells, the Anglican vicar, why we wanted the ‘Soldiers of ’22’.

The idea, we explained, was to have a service that told the whole unvarnished truth about Sean, the idealistic Kerry lad who went north to fight in what he thought was an anti-imperialist war of resistance against British occupiers, murdered for a cause he came to despise, and atoned by spending the rest of his life doing everything he could to damage violent Irish republicanism and, later, gang culture and Islamism.

In the words of the last song of the service, Leonard Cohen’s ‘Anthem’, he had faced what he was involved in and realised: ‘I can’t run no more/With that lawless crowd/While the killers in high places/Say their prayers out loud/But they’ve summoned, they’ve summoned up/A thundercloud/And they’re going to hear from me.’

As indeed they certainly did.

The Vicar got the point immediately, as did Andrew Earis, Director of Music, and both met that and other challenges brilliantly and with relish.

The hymns included ‘Amazing Grace’ (‘how sweet the sound,/that saved a wretch; like me!/I once was lost, but now am found,/was blind, but now I see’) and ‘He who would valiant be’ (‘I’ll fear not what men say/I’ll labour night and day/to be a pilgrim’).

Sean was much-loved and everyone we asked to speak or give a reading accepted immediately.

The Marquess of Salisbury, whom I had put in touch with Sean in the mid-1990s when he was in jail for crimes he did not need to confess to, and who became a close friend, spoke of a remarkable man who was an Irish patriot and also a good, tough, not uncritical, friend of the United Kingdom.

David Trimble read a passage from the New Testament in which Jesus told the apostles that they would be “hated by all because of my name”, which, of course, was a reference to Sean’s decision to become an informer, knowing he would be reviled for it in his own country.

They were just two of several speakers who addressed about 300 people, including Arlene Foster, Colonel Tim Collins, Home Office Minister Ben Wallace and a representative of the Irish state, along with ex-RUC and UDR friends, fellow members of AA, and admirers and innumerable friends of all ages, several nationalities and religions and a vast range of occupations. Sean lived all his adult life with deep remorse for murdering Greenfinch Eva Martin and Inspector Peter Flanagan, who were prayed for at the service.

“Make of Sean’s life an example that draws out the best in our own lives, and inspires us to seek truth and integrity,” prayed the Vicar.

“At his memorial service every word spoken and sung was affectingly poignant,” he wrote later.

Various leaders were gathered “to respect a man who had the courage, dignity and humility to change his mind”.