Stephen Nolan has got under Sinn Fein’s skin, that’s why the party is trying to silence him 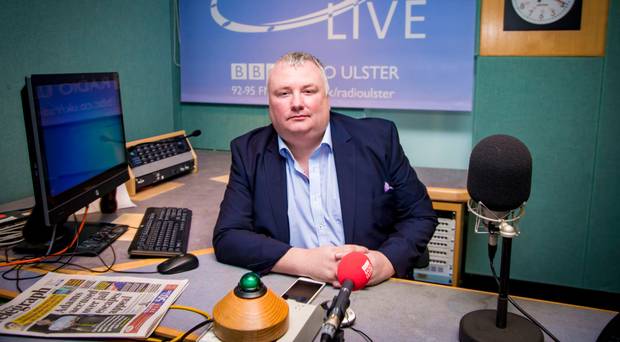 The BBC man must be defended, as a free Press is the very cornerstone of democracy

Stephen Nolan’s brand of journalism can rankle with some, but it serves a vital purpose

Sinn Fein wants Stephen Nolan off the airwaves. I know this because I read in the Irish News a column by Jim Gibney, one of the best-known of Sinn Fein’s chorus of canaries.

Until they were replaced by technology in the 1980s, canaries were employed underground to detect dangerous gases.

Sinn Fein employs them to test out risky ideas in public.

Mr Gibney is an obedient servant of his party who often demonstrates his unquestioning loyalty.

I got a laugh out of his tribute to the Dear Leader as he stepped down as president of Sinn Fein.

Gerry Adams, he explained, “is a warm, sensitive, thoughtful and approachable person. He is brave and fearless. He has a zany sense of humour and enjoys a laugh”.

Most republicans, apparently, wanted this “unique and special person, a national and international statesman”, to lead the party “forever”.

And so on and nauseatingly on.

Mr Gibney’s charity does not extend to Stephen Nolan, who is clearly getting under the skin of the republican powers that be.

Last week he accused Mr Nolan of using his show in “a divisive and destructive manner” that “helped collapse the north’s institutions over the heating financial scandal and helped scuttle the most recent draft agreement”.

I groan about Press hysteria as much as most people; I think, on Brexit, much of the media is undermining the negotiating position of the United Kingdom, and I feel sorry for politicians trying to function at a period in history when they have no privacy and everything they say and write is subjected to intense and often unfair scrutiny.

But I believe a free Press is a vital prerequisite for a healthy democracy, and care passionately about free speech and diversity of opinion, and would be as horrified about the demise of The Guardian as of The Daily Mail.

Nolan seems to me to be in the great tradition of troublesome journalists obsessed with peering under stones and shining an unforgiving light on what lives under them.

Despite listening to him frequently and being interviewed by him sometimes, I’ve no idea about his political opinions and was recently rather baffled by being described on Twitter by one of my more inventive critics as “a Nolan lackey”.

I am a friend and admirer of Brian’s (he took me to my first bonfire), but although I honour him for taking on the lion in his own den and doing so very ably, I had to come down on Stephen Nolan’s side.

One of the greatest failures of the media in the last few years came from its unwillingness to listen to the angry people who brought about victory for both Brexit and Donald Trump.

In my experience of him, Mr Nolan loves lively debate for its own sake, and though I can get as fed up as anyone with rudeness and abuse, I rejoice that Joe and Mary Public have a platform where no one will hush them for having unfashionable or immoderate opinions.

Which takes us back to Mr Gibney, who is trying, bizarrely, to transfer the blame for bringing down Stormont from Sinn Fein to Mr Nolan.

He wrecked the deal, apparently, by fanning the “roaring bellows” of unionist opinion.

Sinn Fein is furious that media voices accuse it of using the Irish language as a weapon in the anti-unionist culture wars, and is focusing its anger on Mr Nolan, who apparently “belittled” one of their politicians by repeating Gregory Campbell’s bad curry-my-yoghurt joke to him.

Apparently, there’s “popular opposition growing on the airwaves rejecting Nolan’s style of journalism” and a petition calling on him to apologise.

I’m one of those journalists Sinn Fein has tried to silence in the past, and it is sometimes succeeded in preventing me going on air.

It’s time for the public to stand up for Stephen Nolan.