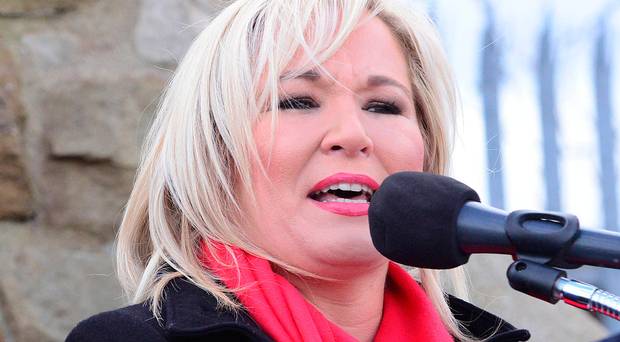 We’re all supposed to be thrilled that Michelle O’Neill said those who rioted in Londonderry on Easter Monday should be “brought before the law”, but what did we think she’d say?

Mrs O’Neill is a faithful reader from the Sinn Fein playbook who was carrying out instructions on how to react when feral republicans do the sort of stuff that these days is regarded as “inappropriate”, or in this week’s euphemism, “undignified”.

So she was hardly going to shout: “Great craic, lads, let’s all join in.”

Obviously I’d prefer her to be condemning violence than encouraging the young to do the sort of thing the IRA gave up doing when it suited it politically, but it doesn’t give me cheer.

She will just as faithfully continue leading ghoulish commemorative parades and delivering eulogies for dead republican killers or would-be killers who frequently unintentionally blew themselves up.

By their consistent eulogising of past savagery, Mrs O’Neill, Mary Lou McDonald and all the other IRA apologists are still in practice encouraging young people to emulate those they are told were heroes.

They display breathtaking double standards by telling children they must revere past violence sanctioned by Sinn Fein while rejecting that still encouraged by hardliners who no longer do the bidding of the Provo Army Council that still runs the republican movement from the shadows.

“Do as we tell you, not what we did,” is quite a challenging order for an idealistic young person who has been inspired by all the warped propaganda about freedom fighting and dying for Ireland.

Naturally, some of them want to be recognised as heroes, have their names intoned on republican platforms or memorials and even have their portraits on gable walls like Bobby Sands, or on a children’s playground like Raymond McCreesh – two men who bombed and shot for the Provos and then starved themselves to death at the behest of the strategists.

As a telling tweet put it: “SF/IRA promote, glorify, idolise with images, memorials, the gaa name clubs, teams and competitions after those who carried out a very public self-harm and suicide. Children all over Northern Ireland see self-harm & suicide as something that is promoted glorified, go figure.”

It is, in fact, child abuse – of which also with its bombs, its iron bars and its lies – the IRA was a serial offender.

Last week too we had Gerry Adams distorting history in an interview with Der Spiegel. Asked if violence was “a legitimate means with which to reach one’s aims”, he explained that it was during the Troubles because “people were being denied their rights” by “the English occupiers”, and “you don’t get progress without struggle”.

There was Elisha McCallion MP, one of Sinn Fein’s poster girls, sharing “with pride” a video of 46 dead IRA terrorists from the Derry area that featured heart-warming details of their happy cultural pursuits.

As UUP councillor Mary Hamilton, who suffered grievously physically and psychologically from the 1972 Claudy atrocity, put it: “I would urge her to stop and think of the pain that we, the victims of IRA violence, have carried all our lives before posting such things.”

But she won’t, of course.

She has other things on her mind, like, as she tweeted last week, the forthcoming launch by Irish Americans of “the McGuinness Principles. This is part of a significant legacy to honour our Cheiftan” (sic).

“These principles include equality, respect, truth and reconciliation and will be adopted throughout America.”

No, I don’t understand that last bit either, but what is important is that Sinn Fein will be using McGuinness abroad in his peace-maker rather than mass-murderer incarnation as a political weapon against unionists and the British and Irish Governments.

No doubt Ms McCallion is also busy helping her leader plan the march Sinn Fein will lead in Derry on Saturday, October 6 as part of its sickening campaign to claim credit for a civil rights movement with which it had almost nothing to do until it hijacked it and began killing.

For those who are sick of the lies, let me recommend the blog https://irishpeaceprocess.blog/author/shaneodoherty051017/.

In it, Shane Paul O’Doherty, who is a truly repentant IRA terrorist, tells many fascinating truths that will never, ever appear in the Sinn Fein playbook.