Not for nothing was Barbara Bush known as ‘The Enforcer’ 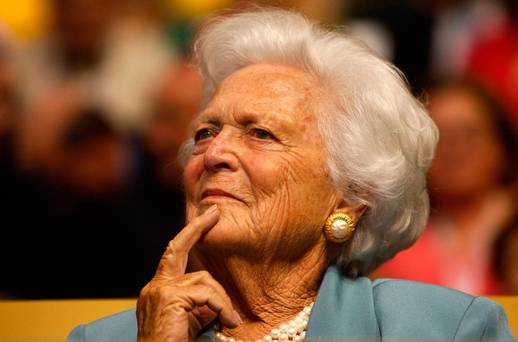 Barbara Bush, tougher than her husband and known to her family as ‘The Enforcer’, is probably the most popular of all ex-US first ladies of recent times. Jackie Kennedy is remembered across the globe for elegance and tragedy, but she was not loved. Rosalynn Carter worked hard and was a noted campaigner on issues of mental health, but she has suffered in retrospect because of her bitterness at his defeat by Ronald Reagan, who is widely perceived to have been as great a success as Carter was a failure. The brittle Nancy Reagan was an essential support to her husband, but was thought to care little for anyone else. Hillary Clinton was loathed by those who thought her a careerist. The likeable Laura Bush did a lot of useful work but lacked her mother-in-law’s commanding personality. And although Michelle Obama had rock-star status, that has diminished as she and her husband embrace luxury and celebrity. Betty Ford is probably the closest rival, having been far more effective and formidable than her husband Gerald, the 38th president, and still having a posthumous reputation for her prowess as a campaigner on addiction, not least because so many of the famous troop to the Betty Ford Clinic.

Various presidents queued up to praise Barbara Bush last week. The 44th, Obama, was a touch self-serving in his expression of gratitude for “the generosity she showed to us throughout our time in the White House”, but even more so for “the way she lived her life – as a testament to the fact that public service is an important and noble calling”.

The 43th, George W, eldest son, explained that he was keeping a public engagement the day after her death because she would have said: “Make darn sure you participate fully in the leadership forum. In other words, ‘Don’t sit around and feel sorry for me or yourself… but move on with life’.” She taught him the power of self-deprecating humour. “My mail tells me that a lot of fat, white-haired, wrinkled ladies are tickled pink,” she said on the eve of her husband’s inauguration. “I mean, look at me – if I can be a success, so can they.”

Her son reported that the last time he had seen her, a few days before her death, they were still teasing each other. She had turned to her doctor and asked: “You want to know why George W is the way he is?” The doctor looked rather surprised. “Because I drank and smoked when I was pregnant with him.”

The 42nd, Bill Clinton, in a warm tribute that radical feminists would probably regard as a sexist, tweeted that he and Hillary mourned “a remarkable woman” with “grit & grace, brains & beauty” who was “fierce and feisty in support of her family and friends, her country and causes”.

Personally, the Bushes got on fine with Clinton, although he had scuppered George Senior’s attempt to win a second term, and appreciated his kindness towards his aged predecessor. Clinton said that “Barbara joked that George and I spent so much time together I had become almost a member of the family, the ‘black sheep’ that had gone astray.” But although a few years ago Barbara praised Clinton for his compassion in a conversation with visiting historians, she was unable to restrain her acid wit by describing how he shamelessly cheated with his “special way of playing golf. He moves the ball” – and she made a pushing motion – “and he has a hard time counting”.

The other surviving president, Jimmy Carter, the 39th, referred to a “matriarch of a family dedicated to serving” who had “touched the hearts of millions with her warmth, generosity, and keen wit” and also acknowledged her success in promoting literacy.

But perhaps the greatest tribute came from Donald Trump, the 45th, who is not noted for magnanimity and has plenty of reasons to hate the Bushes. It was well known how much the family resented his crude abuse of Jeb Bush during the fight for the Republican nomination and that George Bush senior had voted for Hillary Clinton, and George Jnr for “none of the above”. Yet Trump described Barbara as a “wonderful, wonderful person” and “a titan in American life” whose “strength and toughness really embodied the spirit of our country”.

His wife Melania, who is struggling nobly with a job she obviously hates and a husband she seems not keen on, represented him at the Bush funeral, for the president convincingly excused himself “out of respect for the Bush family and friends”, lest his presence proved disruptive.

Mrs Bush was, as one person waiting to file past her casket said, “a little bit more ordinary than most first ladies”, an image she sedulously cultivated even as she proved her extraordinariness as a political campaigner and forced her husband to support such unlikely causes as Aids victims, the homeless and the illiterate. She made a million dollars by writing a folksy book in the name of her dog, which all went to her Literacy Foundation. As first lady, she showed what she could have been had she not sacrificed most of her life to her family, but yet that she never regretted it. In 1990 she demonstrated her wisdom to the students of Wellesley College – some of whom had protested at the invitation to someone famous just for being a wife and mother. Graduates would have three big choices, she told them, the first to devote themselves to something larger than themselves, the second to live their lives with joy and the third to decide where in their hierarchy of values were family, friendship and work.

Careers mattered, she said, but “you are a human being first. And those human connections – with spouses, with children, with friends – are the most important investments you will ever make. At the end of your life, you will never regret not having passed one more test, winning one more verdict, or not closing one more deal. You will regret time not spent with a husband, a child, a friend, or a parent”.

Once asked what was the best advice she ever received, she said: “Be yourself. Well maybe someone a little nicer.” Hard to fault her as a life coach.