Like the hard Left of Labour, Sinn Fein have for years nursed a bitter streak of anti-Semitism 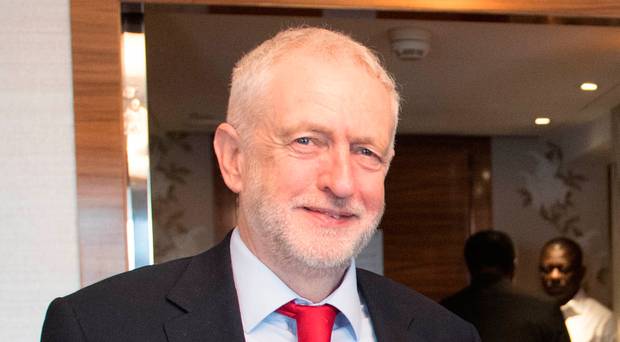 The storm about anti-Semitism in the Labour Party is clearly irritating Jeremy Corbyn, who can’t see it.

The hard-Left — like virtue signallers everywhere — know they’re innocent, because they believe themselves without sin.

So does the cult that is Sinn Fein, which trains its gullible followers to be virulent anti-Semites.

They fly Palestinian flags much less as a mark of their compassion for Palestinians than as a sign of their hatred of Israelis.

But then Palestinians are fed vicious anti-Jewish propaganda by their leaders, while few Israeli politicians encourage hatred of Arabs.

The Republic of Ireland has been fertile ground for anti-Israeli activists.

Pro-Zionist in the Twenties and Thirties, when it was seen as a plucky anti-British movement for self-determination, once the state came into being public opinion shifted to seeing it as a colony imposed by the British on the native population.

Ignoring Jews’ ancestral rights and Arab intransigent and inhuman treatment of refugees, Israelis became the bad guys and Irish political leaders unthinkingly endorsed policies that would lead to the total destruction of Israel.

In the EU, Ireland became one of Israel’s harshest critics: the country’s very success made it undeserving of sympathy.

Sinn Fein has long supported Palestine. In 2006 Aengus O Snodaigh TD, the party’s international affairs and human rights spokesperson, described Israel — the only functioning democracy in the Middle East — as “one of the most abhorrent and despicable regimes on the planet”.

Gerry Adams has been surfing the anti-Israeli waves for a long time and has further radicalised Irish public opinion.

In 2014, for instance, when in response to sustained rocket attacks on its civilians, Israel sent soldiers into Gaza to arrest militants and bombed Hamas’s  terrorist infrastructure, Mr Adams pulled a fast one in the Dail by asking TDs to join him in standing for a minute’s silence in solidarity with “the people of Gaza and the Middle East”.

Sinn Fein members and the Left leaped to their feet, and slowly, the others joined them.

It was a time when anyone trying to explain that Israel was acting in self-defence was screamed at as being in favour of killing babies.

Sinn Fein is stepping up its anti-Israeli activism, since these days it  needs, for electoral reasons in the south, to pretend it wants reconciliation with unionists, so its foot soldiers need a legitimate target for hate.

It has been worryingly successful in spreading its poison. With reason, the Israeli government sees Ireland as the most anti-Semitic country in Europe.

The editor of An Phoblacht — Sinn Fein’s Pravda — in the 1990s, and then a special adviser, he was co-opted by the party onto Dublin City Council in 2011 and achieved notoriety in 2015 by claiming that Irish rugby was run by “west Brits”.

He’s been a key player in persuading the council to support the Boycott, Divestment and Sanctions movement, which seeks to strangle Israel, and demands the expulsion of its ambassador.

He accepted an invitation from the Palestinian Authority to a conference in Ramallah, where he was photographed in front of a backdrop featuring images of the famous Haj Amin al-Husseini, the Nazi-collaborating Jew-hating Grand Mufti of Jerusalem.

A row with the Israeli authorities put Mac Donncha on front pages, where he explained he’d never heard of al-Husseini and denied ever being anti-Semitic.

In a recent blog Adams lambasted Israel for the deaths resulting from its army’s reaction to what he calls “non-violent protests” on the Gaza border. These were, in fact, a staged attempt by tens of thousands of hate-indoctrinated Palestinians to invade Israel.

Gaza is “the largest prison in the world”.

Those of us who remember that Israel unilaterally decided to quit Gaza in the interests of peace see it as a frightened little country under permanent siege seeking to avoid being annihilated.

But like Mr Corbyn, Mr Adams is just another blind ignoramus who thinks himself sinless.