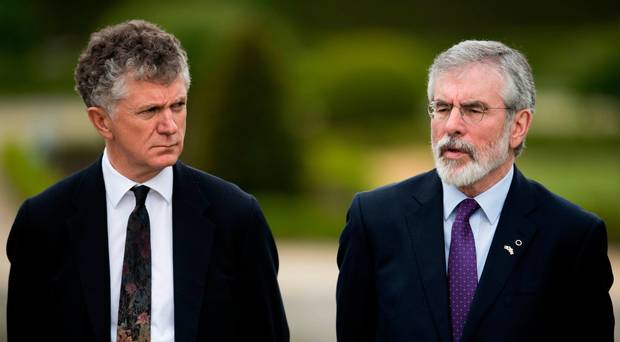 Jonathan Powell (left), former Downing Street Chief of Staff and chief British negotiator on Northern Ireland and Gerry Adams, former leader of Sinn Fein, at the summit in Cambo-les-Bains to certify the end of the terrorist group ETA as an organisation

The place was Cambo-les-Bains, in the Basque part of France, where terrorists on the run from Spain often took refuge.

The occasion was a well-orchestrated statement from ETA saying it was packing up and the three amigos were among the self-styled mediators gathered to lecture the Spanish government on what it should do in response.

You might have forgotten about ETA, since they haven’t murdered anyone since 2010, but to refresh your memory, it is the acronym for Euskadi Ta Askatasuna (Basque Homeland and Liberty).

Born in 1958, it began in opposition to the dictatorship of General Franco, but after his death in 1975, its response to the arrival of democracy was to up the killings.

It had no more justification than the IRA ever had, so it was no surprise that they became buddies.

According to official records, the group murdered 853 people between 1968 and 2010, injured more than 2,600, kidnapped 86 and intimidated countless more.

Jonathan Powell runs Inter Mediate, a charity that engages with armed conflicts all over the world.

He loses no opportunity to remind the world at large of his role as a peace-maker in Northern Ireland, and shows no contrition for the amorality he brought to the table which led to such wrong and dangerous bribes as the On The Runs.

Even Powell can’t ignore that tough security measures destroyed ETA and its political arm, Batasuna, banned in 2003, but in a celebratory article in The Guardian he was at pains to insist that “the way to end armed conflicts” is dialogue, which “requires strong leadership, patience and a willingness to talk to your enemies”.

Adams banged the same peace-process drum and urged the French and Spanish governments to make concessions to ETA prisoners.

ETA had, in Powell’s words, “issued a statement in which it came as close to an apology to the victims of its violence, even if it was not enough to satisfy some of the victims”.

Some of those pesky victims were to be found last week in Spain, in San Sebastian, endorsing the Spanish government’s commitment to continue pursuing the guilty.

The ETA statement having been as weasel-worded as you might expect of a group that is advised by the likes of Adams, it elicited a crisp response from Consuelo Ordonez, whose brother was murdered by ETA, and who leads COVITE, a victims’ collective.

“The only decent sentence that the terrorists could have uttered”, she said, “starts and ends with ‘We should never have existed'”.

And the MEP Maite Pagazaurtundua, whose brother was another of their victims and who was driven out of the Basque Country after years of persecution, was similarly unimpressed.

“The truth is that in [ETA’s] plans for the future, they always had violence and lies. They have removed the violence, but not the lies.”

Among COVITE’s demands was that ETA “condemns its history of terror, rejecting and delegitimising violence so that the upcoming generations in the Basque Country and Navarre will never again think of violence as a legitimate way to achieve political goals”.

And that there be “no more tributes to former terrorists”.

Remind you of home?

Standing beside the COVITE victims were Kenny Donaldson and Ken Funston from SEFF, the South East Fermanagh Foundation, a victims’ group which now operates throughout the British Isles.

Noting that so many politicians and diplomats had consistently failed to empathise with “those who are the collateral damage of a sustained terrorist campaign”, Donaldson called for the focus in the future to be on innocent victims.

Don’t expect the three amigos to agree with him.

Ruth Dudley Edwards is the author of Aftermath: The Omagh Bombing and the Families’ Pursuit of Justice