Ireland has shed its historic culture at a speed that amazes 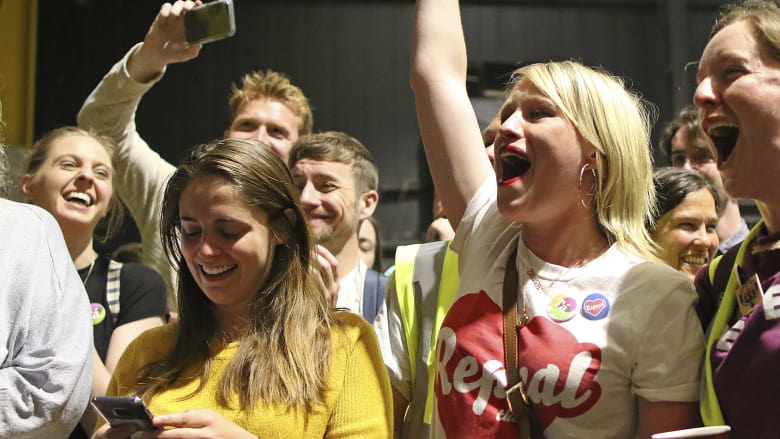 What next for Ireland now that the Republic has astounded the pundits by producing a landslide in favour of overturning the 1983 constitutional amendment that gave equal rights to the unborn?

People from the “Yes” campaign react as the results of the votes begin to come in the Irish referendum on the 8th Amendment of the Irish Constitution. Photo: AP

As the journalist Jason O’Mahony tweeted pithily: “Jaysus. In my youth you couldn’t buy condoms, be gay, get divorced or even see Life of Brian. Now we’re one of the most liberal countries in the world. Incredible.”

As the journalist Jason O’Mahony tweeted pithily: “Jaysus. In my youth you couldn’t buy condoms, be gay, get divorced or even see Life of Brian. Now we’re one of the most liberal countries in the world. Incredible.”

It is a startling change. I’m one of those who emigrated because I hated being controlled by a joyless, bullying, intolerant version of Catholicism combined with conservative peasant values. The speed with which Ireland has latterly sloughed off its historic culture amazes me.

Joining the EU in 1973 helped open the Irish mind. Lobby groups and combative lawyers secured legislative loosening of censorship and the sale of contraceptives. A ruling in 1988 that Irish law prohibiting male homosexual activities contravened the European Convention on Human Rights led to its decriminalisation in 1993.

But divorce and abortion were protected by the constitution and the church’s attitude to the preservation of “faith and morals” was unchanged.Pro-life pressure resulted in 1983 in the 8th amendment to the constitution that was voted down on Friday.

From the Thirties onwards, as Irish governments avoided labour agitation by exporting its superfluous people, they dealt with social problems by having the clergy run hospitals, schools, reformatories, orphanages, hostels and homes for unmarried mothers. As the Irish saying goes, the dogs in the street knew there was abuse, but the media and politicians were too scared of the bishops to do anything about it.

The grip of the church began to slip in the Eighties with the exposure of scandals involving individual high-profile clerics and revelations of the suffering of children and women in various institutions. In the ensuing furore, denunciations of the church blocked out the inconvenient truth that families and the state had outsourced their problem children: the good work of many selfless nuns, priests and brothers was forgotten.

Abortion was the biggest taboo, but a hard case in 1992 changed public opinion. A 14-year-old told her mother she felt suicidal because she was pregnant after rape by a neighbour, so the family decided to take her for an abortion in the United Kingdom, where a few thousand women went every year. Their inquiry to the police if DNA from the aborted foetus would be admissible as evidence led to the Attorney General taking an injunction to prevent her from travelling. It was overturned by a Supreme Court ruling that in the case of “a real and substantial risk” to her life, abortion was legal if there was the possibility of suicide but not for a risk to her health.

By this time, Miss X had miscarried, but the public were agitated. The 8th amendment came under scrutiny after the death from a septic miscarriage in 2012 of Savita Halappanavar, an Indian dentist. It was reported that she had begged for an abortion and had been refused. It would later emerge that her death was more due to medical incompetence and carelessness than denial of abortion, but few care about the facts.

Ireland is on a roll, delighted with its new image as a progressive, youthful country that voted for single sex marriage in 2015 and has as prime minister Leo Varadkar – half-Indian, gay, and cool. All major political parties with few exceptions backed repeal of the 8th including Sinn Fein, which rebranded itself as a progressive party that would take the battle on abortion to Northern Ireland, which for many years was more liberal than the south but suddenly found itself ridiculed as “backward” because of its conservative views on sex and marriage.

As a gay unionist friend told me: “The cry is going up now that NI is the last bastion in Europe of oppression for women and gays (except Belarus).”

There will be more rows and bad feeling in Northern Ireland as Sinn Fein uses the result as a bludgeon against the DUP. But Jason O’Mahony, a decent liberal, deserves the last word. “This is a great day. But spare a thought for the thousands of good people, our friends, relatives and colleagues, who voted no in good conscience. This will devastate many of them. This isn’t the US. Let’s not hate each other after this.”