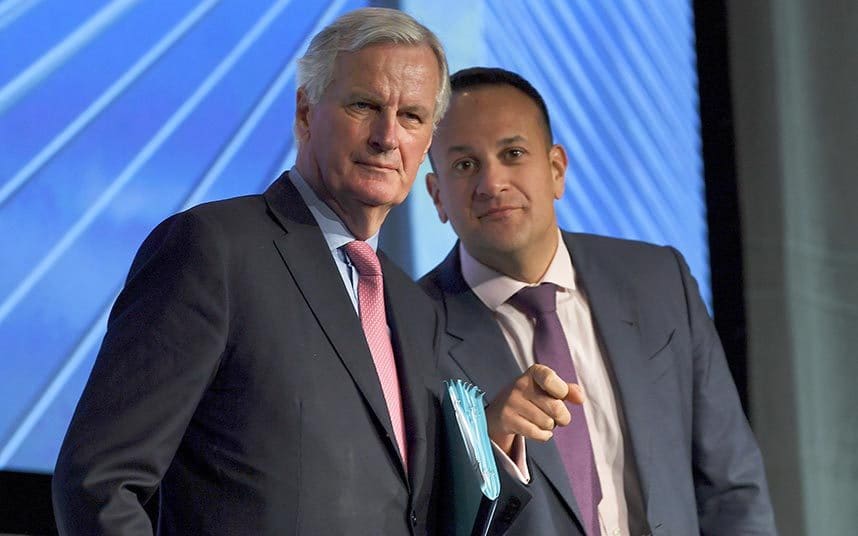 Have my Irish compatriots forgotten how the EU once treated Greece? 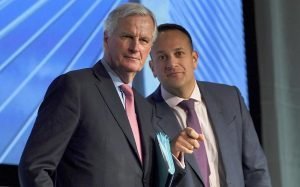 Another week, another bromance, this time between Michel Barnier, the EU’s Brexit negotiator, and the Irish prime minister Leo Varadkar. The cynical Brussels game of suckering Ireland by weaponising its border with Northern Ireland in the war against a secessionist upstart is gathering pace.

“Let me first thank you, dear Leo…” began Barnier’s speech, “for inviting me to speak at this 4th All-Island Civic Dialogue. It is a privilege and honour to be here and a pleasure to be in Dundalk.”

Pleasure isn’t quite the mot juste, especially for unionists, who are not impressed at the choice of location. Not only was Dundalk so lawless during the Troubles and so welcoming to IRA people on the run that it was nicknamed El Paso, but Gerry Adams of Sinn Fein tops the poll there.

But yesterday no one cared about the unionists any more than they did about the Brexiteers. Anglophobia is fashionable again and is being fuelled by the Commission, which Varadkar innocently trusts to rescue his country from the consequences of the referendum vote.

It has been a constant in Ireland’s history to seek help against its big – often bullying – neighbour by seeking succour from the Continent. That the Irish were always let down seems to have escaped the institutional memory.

Solidarity “is an essential feature of these negotiations,” explained Barnier. It was in the interests of Ireland that the EU insists on a backstop as part of the Withdrawal Agreement, which means that failing any other agreed solution, Northern Ireland will stay in full alignment with the rules of the single market and the customs union. As the British Government won’t accept a border down the Irish Sea, the UK will have all the constraints of membership without any power.

Barnier shook his head at any ignoble suggestion that the backstop is “part of a negotiation strategy. We are not playing tactics with Ireland’s vital interest.” Non, non, non. Or, as he put it in an article in an Irish Sunday newspaper: “No matter how big or small a country is in the EU, we stand by each other through thick and thin.”

I’m Irish by birth, upbringing and citizenship, and I know what pushovers my countrymen are for flattery. We out-Trump Trump. But how can the Irish government have so lost its head as to trust the Commission, which was party to forcing its predecessors to put the interests of German bondholders ahead of those of Irish taxpayers during the eurozone crisis?

Did they learn nothing from the fate of Greece? As Yanis Varoufakis, the Greek ex-finance minister who in his fascinating Adults in the Room published transcripts of conversations with EU officials laden with mendacity and duplicity, points out: “Barnier was appointed to make sure the [Brexit] discussion failed.”

The misfortune for the UK and Ireland is that this destructive negotiation would have been very different if Enda Kenny had not given way to Varadkar as prime minister last June. For like his predecessor, Bertie Ahern, Kenny was an old hand at EU negotiations and his early reaction to the referendum result was to brief Northern Ireland First Minister Arlene Foster regularly, instruct civil servants to have regular meetings with their Northern Irish equivalents and work on developing an electronic border.

But Varadkar – inexperienced and naïve, with a foreign minister who wants his job and ruthlessly plays the nationalist card, and with Sinn Fein, which until recently was anti-EU, both domestically and in Brussels making the anti-Brexit running – joined the hardball team and cancelled the lot. Ahern was ignored when he pointed out publicly that no one wants a hard border and that technology and flexibility would do the job.

Obediently, Varadkar has followed the Brussels lead by parroting criticism of all constructive suggestions as “magical thinking”. Among all its other foolishnesses, this is poisoning relations with unionists, who are just as keen as anyone else on having a frictionless border.

It’s a crisis manufactured in Brussels. But if the UK keeps its nerve and stops negotiating on Barnier’s terms, his bluff will be called. Barnier is Jean-Claude Juncker’s man, and hopes to succeed him. But he won’t become Commission supremo by destabilising the UK and the EU. Even the bromance might come a cropper.