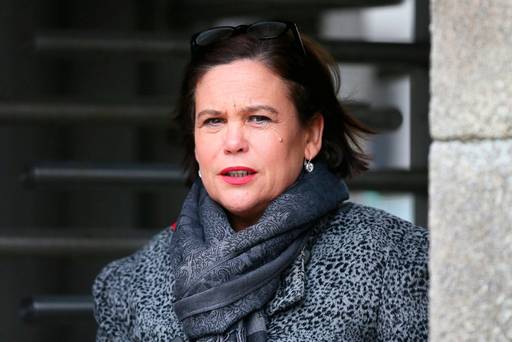 The Sinn Fein leader has been successfully selling herself as the new face of her party, writes Ruth Dudley Edwards

Mary Lou McDonald‘s honeymoon with the electorate is going well so far, if today’s and other recent polls have got it right. And well it might, since she’s astutely selling herself at every opportunity to display herself as a new, approachable, modern leader who has put her male, pale and stale predecessor back in his box.

Women’s issues? Tick. She’s done very well in the Dail on the cervical cancer issue, even if her insistence that HSE boss Tony O’Brien should be sacked is unfair, since, as the Taoiseach says, “everyone deserves a fair hearing before they are condemned”.

Her insistence that his denial that he had known about misdiagnoses “stretches credibility to breaking point” is a bit hard to take from the loyal sidekick who for years subserviently repeated “I believe Gerry” as Adams brazened out shocking and well-supported allegations about his role in the IRA and his failure to report paedophiles, including his own brother.

She also took care to be noticeably less hectoring than is her wont, since she seeks to convince Leo Varadkar and his troops that if she went into coalition with Fine Gael she wouldn’t eat the party alive. She denies, of course, that she’s “cosying up to him”: she is, she explains, carrying herself “with a level of professional courtesy and civility”.

She has handled skilfully the claim by the Irish Examiner’s political editor, Daniel McConnell, that there was no denying her possession of “one of the most rare attributes in politics – sex appeal” and the skill with which she weaponised it.

She was calm and statespersonlike, saying she was Sinn Fein leader “by dint of effort, merit, ability, I hope”. Note the clever mixture of confidence and modesty.

She also cannily remembered to add that she was leader “in the final instance, because of the support and confidence that the Sinn Fein membership both north and south”.

In her attempts to appeal to those two very difficult electorates, she’ll have had the nod from republican central in Belfast where Adams and the remnants of the army council so far control Sinn Fein strategies.

They’re not thick, and they know that although the party collapsed Stormont to keep the hard men happy, it has negative resonances in the Republic, where in general people want to hear nothing from north of the Border except that two lots of people they consider impossible are getting on together.

That, as well as pleasing Leo, was why McDonald visited the Ulster-Scots Heritage Centre in Donegal, followed by meeting Martin McGuinness’s friend, Presbyterian minister Reverend David Latimer, and his congregation.

Afterwards, in a video she recorded with Latimer, she spoke of the wonderful conversation they had had with “young people with interests across Derry, or Londonderry”, causing a few malcontents to tweet viciously about her heresy in using the ‘L’ word.

She also made much of Sinn Fein support for Varadkar’s successful nominee for the Senate, unionist anti-Brexit farmer Ian Marshall, whom she believed would contribute to “the discussion surrounding a new Ireland”.

The candidate for the West Tyrone by-election last Thursday was carefully chosen.

Orfhlaith Begley is a 26-year-old solicitor whose father was an Omagh Sinn Fein councillor for many years but is not alleged to have been in the IRA.

Her republican credentials are not in doubt, though. Pat Doherty, who held that seat from 2001-2017, before giving way to Barry McElduff, who had to resign because his pose with a loaf of Kingsmill bread on his head on the anniversary of the 1976 Kingsmills massacre caused him to be suspended and later forced to resign, was close by her side.

Doherty is little known down south, but although he’s never done time, he was one of Adams’s and Martin McGuinness’s closest associates in all their activities and is highly regarded in the shadowy world of IRA veterans.

The SDLP put up a spirited challenge over Sinn Fein’s abstentionist policy, which means they will be unable to influence key Brexit votes, but Begley won with only a 4pc drop in vote share.

Post-count proceedings were carefully choreographed with an eye to both sides of the Border.

There were Constance Markievicz T-shirts, commemorating the centenary of her election to parliament, thus stressing continuity with 1916, but no locally offensive trappings.

Begley distanced herself from McElduff in her acceptance speech by calling for people in public life “to acknowledge the pain that exists… to be sensitive in their words”.

Significantly, she described her win as “a new chapter for West Tyrone. What I’m about is building for the future, reaching out to unionism and building bridges between our communities”.

Michelle O’Neill, party leader up there, told the audience that the job of political leadership was “to heal the wounds of the past”, to have a joint “healing process” with “unionist partners”, and stressed that Begley wanted to be “about reconciliation”, “building the new future” and representing “everybody”.

Lest the message upset die-hards, Pat Doherty tweeted that Begley had been “a pleasure to work with and mentor over the past few months… Proud of this new generation of republicans”.

Back home, McDonald will be continuing the charm offensive.

Perhaps wary of a honey-trap, Varadkar cancelled an arrangement to canvass with her for “Yes” in the upcoming referendum.

Micheal Martin, who has been unremittingly hostile to Sinn Fein, knows his enemy pretty well, but like Varadkar, has the big decision to make.

Is she genuinely trying to move Sinn Fein towards being a truly constitutional party or is she the same McDonald who has been an apologist for terrorism, a denier of a bullying culture and greatest supporter of Gerry Adams, a bad man.

She’s on a high wire, but she’s a skilled and dangerous performer. Neither will be keen to catch her if she falls.