Whether naive, or arrogant, Varadkar and Coveney are crossing the line on Northern Ireland affairs 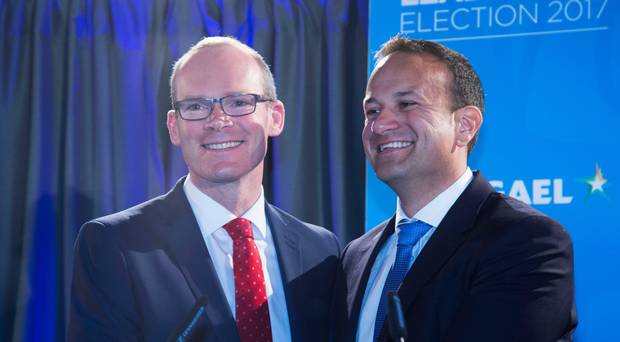 Slavish towards Brussels and meddlesome up north amounts to a bad combination, says Ruth Dudley Edwards

The DUP’s Sammy Wilson got cross last week about Leo Varadkar’s revelation that the Irish government had proposed “a joint initiative” by the Irish and British governments to try to get the Executive and Assembly “back up and running”.

There was, said Wilson, “no way that any unionist would ever accept that an Irish Taoiseach – particularly one who has been as belligerent towards the unionist position as Leo Varadkar – should have any say in putting forward proposals for the setting up of government in Northern Ireland”.

It was “another example of Mr Varadkar’s ongoing display of astonishing arrogance” in thinking he has a role in Northern Ireland’s internal affairs, Mr Wilson said, adding: “It either shows his lack of knowledge, his naiveté or his arrogance. I happen to think it is arrogance, as the man has form in this area.”

I think it’s more ignorance and naiveté than arrogance, though when it comes to Simon Coveney, the Irish foreign minister, I’d plump first for arrogance.

Coveney seems to be an inveterate meddler.

His interventions on the question of an Irish Language Act were high-handed in the extreme.

And then there’s his support for that unpleasant piece of work, Tony Taylor.

Taylor got 18 years in the 1990s after being caught in a “premature explosion” in Londonderry when helping set up a mortar attack, was freed under the terms of the Good Friday Agreement, joined the Republican Network for Unity and was back in custody in 2011 for possessing an automatic weapon.

Released on licence, in 2016 he was returned to prison by order of the Secretary of State.

Pressurised by Sinn Fein and a few odd TDs who champion dissident prisoners, although this is a matter for the Parole Commission, Coveney was bragging last week in the Dail about the effort he has been putting in intervening on Taylor’s behalf with Secretary of State Karen Bradley, demanding new parole hearings and complaining that his imprisonment is “contributing negatively to community tensions”.

It isn’t just unionists who are furious about this crossing of the line.

David Ford, previous leader of the Alliance Party, commented: “While justice minister, I did not intervene in any due process and I would advise other politicians to do the same, instead respecting the integrity of the Good Friday Agreement.”

Despite all the criticism from across the border, yesterday morning, on the Andrew Marr show, Coveney seemed astonishingly pleased with himself over the Brussels negotiations, clearly revealing himself to be still slavishly following instructions from EU masters who will sacrifice the interests of Ireland in a heartbeat, as they sacrificed Greece.

He continues to dismiss perfectly sensible suggestions for avoiding a hard border and any kind of physical barrier.

Unbelievably, he shows no signs of having given any serious consideration to, for instance, the highly constructive work of the Policy Exchange think tank.

Dr Graham Gudgin, a distinguished economist, and Ray Bassett, one-time senior member of the Irish Department of Foreign Affairs, have produced a joint paper which Coveney seems not to have bothered to read.

It’s short, clear and answers all the important questions.

You can find it at https://policyexchange.org.uk/wp-content/uploads/2018/05/Getting-over-the-line.pdf.

As David Trimble, who wrote the introduction, put it, “fears over a ‘hard border’ are only as strong as the refusal of those who do not engage with a workable technological solution”.

To Lord Trimble, the Varadkar government are putting temporary political advantage” in the way of “a mature negotiation”.

He wrote that the Taoiseach is endangering “more than three decades of goodwill built up between London and Dublin”, with the main threat to averting a hard border coming from “the reckless intransigence of Michel Barnier [EU chief negotiator]”.

And Kenny’s predecessor, Bertie Ahern, is wringing his hands publicly about the way the negotiations are going. It’s not just that Coveney and Varadkar are helping to create roadblocks, it’s that in their desperate desire to show they’re good EU boys, they’re sacrificing the interests of their own country.

It is Ireland that stands to lose most if there isn’t a decent Free Trade Agreement between the UK and EU.