The voters must choose decency or barbarism 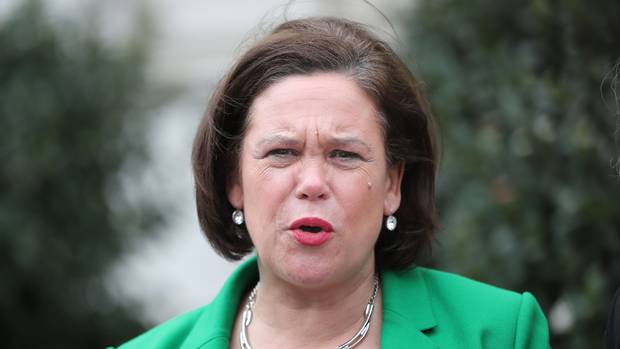 Last Thursday, Dr Colum McCaffrey who taught Political Communication for 20 years in UCD, blogged about media partiality during the referendum campaign for Mary Lou McDonald as a Yes spokesperson. “Over the past few weeks journalists and programme producers – especially at RTE – time and again selected her.” Although he thought she did it very well and he agreed with her arguments, he could see nothing in what she said that could not have been said by many others.

Last Friday, a letter from Monaghan reader Raymond Kernan was published in The Irish Times – where he noted that in the previous few weeks “Mary Lou McDonald’s photo has appeared almost every day… and sometimes two or three times in the same issue. Traditional readers of The Irish Times are disgusted with this Sinn Fein bias that has crept into your newspaper, and the dead ones are turning in their graves”. Especially, one might add, those murdered by the terrorists regularly extolled by Ms McDonald.

Mr Kernan’s letter appeared the same day as an excitable contribution from Una Mullally, the paper’s resident beater of any “progressive” drum you can think of. The evils of toxic masculinity and gender inequality are always on her mind, which makes her inclined to judge people purely by their stance on her present priorities. “Sinn Fein,” she declared, “emerges from the referendum as the only large party with a female leader, now swooping down to grab female voters and the middle classes for whom Gerry Adams is already a memory.”

It’s a pretty scary image of what’s in store for Mna na hEireann and the middle classes, but hey, they’re female birds of prey so they’re okay. She seems unconcerned about the toxic masculinity that dominated Adams’s beloved IRA when it murdered almost 2,000, mutilated tens of thousands and damaged the mental health of many more through the imposition of bereavement, suffering, fear and hatred. It’s all about now. And, after all, has Ms McDonald not told Shawn McCreesh, of The New York Times, that the republican movement is now “a hugely feminised, feminine movement”.

That must have provoked sniggers from the tiny male cabal of Mr Adams and his IRA chums who decide party strategy. A few chortles, too, over the gullibility displayed by poor star-struck Mr McCreesh, who had another avian metaphor about Sinn Fein, now “the most socially progressive party”. “Once on the fringe,” it “rises like a phoenix from the peat bog, gobbling up seats in Parliament and swelling its ranks with new voters.” Mr McCreesh saw Ms McDonald as “something of a feminist icon” and rightly noted that “there isn’t another lawmaker more closely allied with the movement to legalise abortion”. She is “the most exciting person in politics here today” and, as he suggested to her, possibly the first female Taoiseach. ‘”How great would that be?” she asked, with a laugh. “Well, why not?”‘

Since Sinn Fein did not give the okay to abortion until last November, it’s no wonder Ruth Coppinger sounded so disgruntled in her post-referendum Dail statement when she pointed out that “the socialist left in the Dail was the only reflection of the movement taking place for a long time and until recently”.

Are voters in the Republic as ignorant, gullible or amoral as much of the media appear to be? Well, polling evidence suggests they’re not. Yes, satisfaction with the Sinn Fein leader rose after Ms McDonald took over. She looks and talks much better than Adams and she’s not a Nordie. But the core vote isn’t going up. The RTE exit poll after the referendum (excluding undecideds) showed Sinn Fein at 16pc, and it is still consistently seen as the most toxic party. Maybe voters remember that Ms McDonald got her job by doing and saying what Mr Adams dictated and is reverential towards the perpetrators of mass murder. As Dr McCaffrey pointed out, she and her party “want it accepted, made normal, that the military campaign of the Provisional IRA be commemorated and celebrated like other violent parts of our history” rather than “recognised as a depraved episode and a stain upon the nation”. Yet when they chose “to beat and shoot civilians, and routinely bomb public places, they embarked on a deliberate campaign of war crimes”.

Irish media routinely present IRA apologists as “normal, decent people”, he writes, yet “regarding war criminals and a campaign of war crimes in this perverse way is incompatible with being a normal, decent person, someone to be admitted to civilised society and called upon to comment on our controversies”.

What’s at stake he sees simply as a struggle between “decency and barbarism”.

Dr McCaffrey is right. For the sake of this country’s soul, we have to hope that voters continue to know the difference.