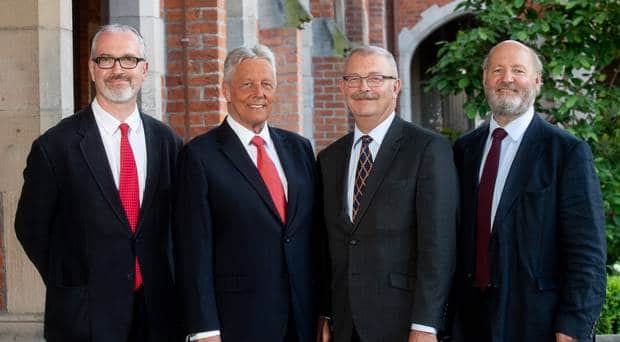 “We the undersigned,” it begins, “members of the school of history, anthropology, politics and philosophy, the department of law, the department of sociology, the department of English, and associate fellows of the George Mitchell Institute, are writing to express our deep concern and profound regret at the recent appointment of Peter Robinson to an honorary professorship at Queen’s University Belfast”.

They complained that Mr Robinson had in 2008 defended calling homosexuality an “abomination” and in 2014 had failed to distance himself from “the Islamophobic sentiments” of a pastor who had claimed that Islam is “Satanic” and “heretical”.

If Queen’s and the George Mitchell Institute wanted to help create “an inclusive, secure and enriched society”, why was it “honouring and magnifying the views” of this person by “weaving hostility to LGBT+ and Muslim staff and students into the fabric of the University?”.

They demanded the institute distance itself from Mr Robinson’s “repugnant” views, and explain his appointment: his “intolerant views” had been publicly known and the academic institutions involved were supposed to act with “caution and sensitivity to the entire academic community when conferring such honours on controversial figures”.

At the risk of having some of the 37 demand that my honorary degree from Queen’s be withdrawn forthwith, I should mention that in recent years as a result of criticising some LGBT activists and the Muslim Council of Britain, I’ve had the distinction of being labelled both transphobic and Islamophobic.

I’m neither, but I wear such accusations with pride.

In 2008 Mr Robinson justified his wife Iris’s denunciation of homosexuality as an “abomination” on the grounds that she was quoting from the Bible.

In 2014 he defended the right of Pastor James McConnell to criticise what he thought was “false doctrine”, said he knew him as a preacher of love, not hate, and said he himself wouldn’t trust Muslims who had been involved in terrorism or who were devoted to Sharia law, but would “trust them in day-to-day activities”.

Pastor McConnell’s sermon was private, but when Dr Raied Al-Wazzan of the Belfast Islamic Centre – one of those who met Arlene Foster on Friday – heard about it, he reported it to police as a hate crime.

What gave this a certain piquancy was that a few months previously Dr Al-Wazzan had said that Isis had been a positive force in making Mosul, his home city in Iraq, “the most peaceful city in the world”, which indeed it had, by enforcing a vicious version of Sharia law which included executing gay people, slaughtering the opposition, and driving the surviving Christians into the wilderness.

When Dr Al-Wazzan got into trouble, Pastor McConnell had publicly said that while he strongly disagreed with him, he supported his right to say what he believed.

Who is the bigot?

Reassuringly for free speech advocates, Mrs Robinson wasn’t prosecuted and Pastor McConnell was found not guilty, but even after his private and public apologies for upsetting Muslims, Mr Robinson remains persona non grata to the 37. What fascinates me is that they seem unbothered about the appointment of Mitchel McLaughlin to the other honorary professorship.

Mr McLaughlin has been a Sinn Fein activist for more than 50 years and an IRA apologist through the decades of murder and mutilation, including the assassination of Edgar Graham on the Queen’s campus.

In 2005, on RTE, under acute questioning from Justice Minister Michael McDowell, Mr McLaughlin said that though he thought the murder of Jean McConville was “wrong”, it wasn’t a “crime”, as it had been authorised by an IRA court martial and the IRA was “the only legitimate government of Ireland”.

He was, he said, “entitled to his view”.

As indeed he was and is, but so were the Robinsons and Pastor McConnell. Peter Robinson’s debut lecture was thoughtful and positive.

I hope Mr McLaughlin’s will be the same.

It seems that Queen’s has no intention of yielding to people who have forgotten that a major job of universities is to foster robust debate.

Is it too much to hope the 37 will realise they’ve behaved like prats?