If there was to be another EU referendum, I’d vote Leave with even more gusto than 2016 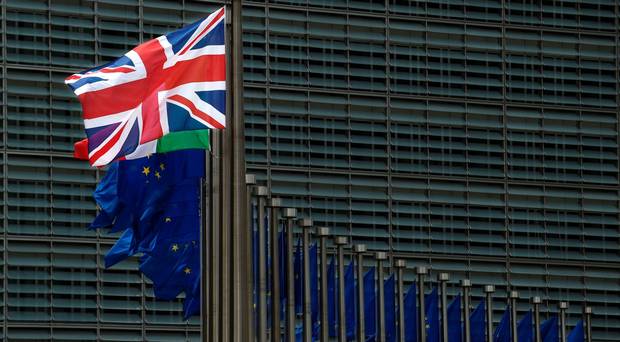 The British Government has been weak, the Irish gullible and the EU cynical, writes Ruth Dudley Edwards

The Union flag flies outside the EU headquarters in Brussels

I regret all sorts of things about the timid way in which the British Government is negotiating Brexit and the foolishness of the Irish Government in allowing itself to be used as a pawn by Brussels, but I absolutely don’t regret voting Leave.

In the 1975 referendum I said yes to the question: “Do you think the United Kingdom should stay in the European Community (the Common Market)?”

Then, I dismissed as paranoid the people who said that we would be surrendering sovereignty to power-grabbers, but eventually came to see the UK as a very uneasy fit with what was becoming clear was an increasingly grandiose European project.

Older and wiser, I feared from the outset that the euro might in the long term sink the EU, while causing much misery along the way.

Having been brought up in Dublin, but being a long-time English resident, I had come to think of myself as British-Irish, so it was disconcerting to see that simultaneously the enthusiasm of the Irish Republic for the project had grown.

Yet though what became the EU had had a positive effect in opening the Irish mind, it had nurtured a sense of dependency, had wooed the country into the euro-corset, assisted its plunge into irresponsible debt, sacrificed it to German bankers and bullied it because it was small.

Still, I knew most Irish people hated the very thought of Brexit and that there could be a serious breach between the two countries I love.

I dithered for months; however the arrogant response of the EU establishment – especially Jean-Claude Juncker – to David Cameron’s efforts to avert a crisis by agreeing to reforms made me despair.

“I couldn’t support staying in what I think has become a sprawling, sclerotic, dysfunctional, bureaucratic hellhole, incapable of meeting such urgent challenges as mass migration and Russian aggression, while demanding a European army that can only undermine Nato,” I wrote after the vote.

The hysterical abuse of Leavers that followed and the atrocious behaviour of the European Commission removed any lingering doubts.

The accusations of stupidity, ignorance, xenophobia, racism and little Englandism were deeply unfair.

Ireland, of all countries, should have recognised that to want your independence from foreign interference is a legitimate aim that has nothing to do with narrow nationalism.

Neither the EU nor the UK establishment showed any respect for democracy (which is dismissed as populism if it comes up with the “wrong answers”) and Ireland moved from cooperating with the UK to confrontation because a naive new Taoiseach was flattered and bullied by a cynical Brussels cabal.

As Yanis Varoufakis, the Greek ex-finance minister who got his own back at the EU by publishing his covertly-recorded doomed negotiations in the fascinating Adults In The Room, has remarked, it was clear that Michel Barnier was appointed to make sure the negotiations failed.

The English obsession with fairness, compromise, seeing the point of view of the other side and giving them the benefit of the doubt makes them kind neighbours but poor negotiators.

Mrs May made awful errors in allowing Barnier and the boys to set rules that suited only them, in agreeing to sort the bogus issue of a hard border before trade deals were sorted and in taking in any way seriously their cynical dismissal of practical solutions.

How can anyone look at the state the EU is in and want to be part of it?

Because of its size Germany dominates; even by its normal standards Italy is in a right old state, and it is now joining Hungarians and Poles in refusing to obey orders to take destabilising numbers of refugees and economic migrants Mrs Merkel invited in without any consultation whatsoever.

It has just imposed a whole new raft of pointless and costly regulations, from lighting (inefficient and likely to cost the UK £1 billion) and GDPR (which filled our in-boxes full of silly emails about privacy, is well described as “a solution in search of a problem”, and estimated to cost the FTSE 100 companies alone about £1.5bn).

Well, if there was a second referendum tomorrow, I wouldn’t be dithering.

I’d be out there delivering leaflets, knocking on doors and shouting: “No surrender.”