Constance Markievicz was last night commemorated as the first woman elected to parliament… but how many gathered in the Commons knew she was almost certainly a cold-blooded killer? 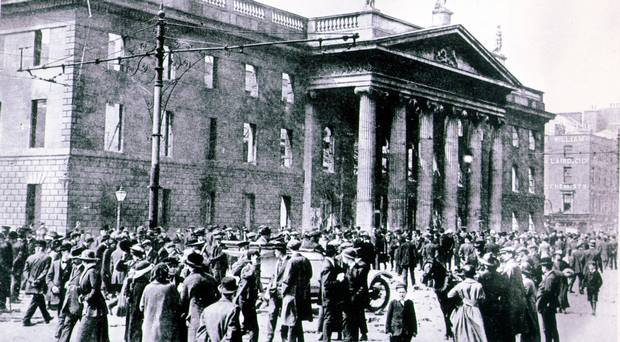 The former Constance Gore-Booth, a Protestant noblewoman from Co Sligo, embraced many causes in her lifetime: feminism, republicanism and, finally, revolution. But what part did she play in the murder of unarmed police constable Michael Lahiff? 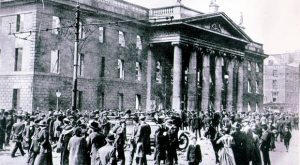 The shelled-out remains of the GPO after the Easter Rising

Yesterday provided another rather bizarre moment in the complex Anglo-Irish relationship when a portrait of Constance Markievicz – a photographic reproduction of an oil painting from Dublin City Gallery – was presented to the House of Commons Speaker John Bercow by his counterpart in the Dail, Ceann Comhairle Sean O Fearghail.

The reason for this was that women in the United Kingdom were given the vote in 1918 and in Westminster Hall there is a major exhibition – Voice And Vote – covering the campaign for female suffrage. In Dublin the Votail 100 committee is similarly commemorating this achievement and it was it that provided this gift.

Fair enough. Mrs Markievicz deserves recognition as the first woman ever elected to parliament, when, on December 28, 1918, she won a Dublin seat two years after she had been sentenced to death for her part in the 1916 Rising, been imprisoned and had duly achieved fame.

Being Sinn Fein, she did not take her seat. Abstention from the British parliament is one of the few ways in which modern Sinn Fein stays true to the old republican faith.

I’m looking forward to visiting the exhibition when they have hung Mrs Markievicz’s portrait, for I’m keen to see if the Westminster curators put any of the dodgy, or gory, bits into whatever they write about her.

Now, before I get attacked for giving a disrespectful title to the lady popularly known as Countess Markievicz, let me explain. The Protestant, Bohemian and fearless huntswoman Constance Gore-Booth, from Lissadell House in Sligo, was in Paris studying art when she met Casimir Dunin Markievicz.

Since her upper-class Anglo-Irish family were unlikely to be thrilled with her marrying a rather hard-up Polish widower, it helped that she could tell them he was a count.

Her prudent brother checked this out with the British ambassador in Russia, who reported that he had no right to the title he used. Still, she was 32 and the marriage went ahead, and though she knew the title was bogus, she used it.

The 1901 portrait entrusted to Speaker Bercow is appropriately that of a young, handsome woman in full evening dress – perhaps on her way to a ball at Dublin Castle, which at that period of her life she frequented.

Then, and indeed later, even after she denounced snobbery and became an idol of the Dublin poor, she bragged privately about her high social status and was mocked for it in her autobiography by Kathleen Clarke, widow of 1916 leader Tom.

I note with amusement that, while on the Votail website she is referred to as “Countess de Markievicz”, the ideologically pure Labour Party ultra-progressive Senator Ivana Bacik, chair of the committee, who does not approve of aristocratic trappings, refers to her as “Ms Markievicz”, thus awarding her a title that wasn’t invented until decades after her death.

Frances O’Grady, general secretary of the TUC, also abjures titles: “Markievicz was a great champion of working people, along with her sister, the trade unionist Eva Gore-Booth.

“Despite coming from a privileged background, they consistently spoke up for working women.”

Jeremy Corbyn, who, as you might expect, is very keen on her, refers to her chummily as “Connie Markievicz”.

For simple convenience, here I’ll call her Madame – the posh title by which she was also widely known, including in Dail debates.

So, there’s a nice headache for the curators.

What is straightforward is that she enthusiastically adopted a variety of causes including feminism, suffragism, anti-imperialism, socialism, republicanism and, finally, revolution.

Indeed, so committed was she once she became active in her new causes in Dublin that, in 1908, she dispatched Maeve, her only child, to Sligo to be raised by her mother.

Considering the recent eulogising of the violent element in the battle for the vote, no doubt few eyebrows will be raised at Westminster over Madame’s increasing militarism, her penchant for training boy soldiers, her flamboyant parading around Dublin with the Irish Citizen Army in her becoming uniform and her participation on equal terms with men in fighting during the rebellion.

But, as various progressives queue up to praise Madame, here’s another conundrum for the curators: even by the standards of the time, she was exceptionally bloodthirsty.

She was not only an hysterical supporter of Germany during the First World War, but was almost certainly a cold-blooded murderer.

In the circumstances of 1916, she won’t attract much criticism for shooting Army snipers, but there is strong evidence that she killed unarmed police constable Michael Lahiff, shouting: “I shot him, I shot him.”

The writer Sean O’Faolain described how, when she was with other insurgents at St Stephen’s Green, “she saw a khaki uniform in the window of the University Club”.

“It was, actually, an Irishman, Dr De Burgh Daly, watching the movements below him from the window of the reading room. The pageboy from the lower floor was also watching and saw the woman raise her rifle and fire. She missed.”

Although, nowadays, it is fashionable to hail all republican heroes, including Madame, as having been peace-loving, the evidence just doesn’t stack up.

She was a violent opponent of the Anglo-Irish Treaty and was voluble in the Dail in insisting that no political concessions of any kind should be made to her “crushing, cruel and grinding” southern unionists.

In an essay I wrote about her some years ago for a lecture series called ‘Speaking Ill of the Dead’, I summed her up as a poor role model for Irish children: “a snob, a fraud, an exhibitionist, a murderer who neglected her own child but trained other people’s children to kill and die for Ireland”.

She’s not much of a role model for young British children, either.

After the Westminster Hall exhibition, Madame is, apparently, to be transferred to Portcullis House, the parliamentary overflow building.

I sincerely hope she is accompanied by a Government health warning.