Why Mr Paisley has presented some problems for Mrs May, Mrs Foster and Ms McDonald 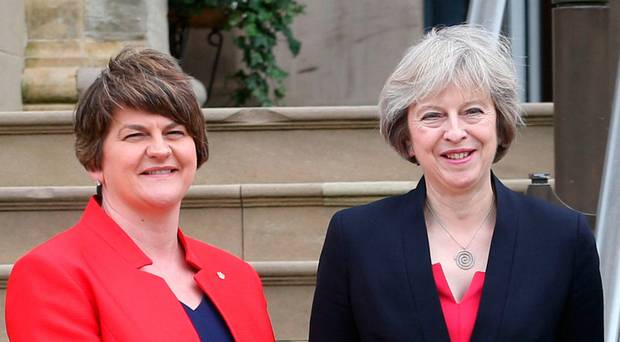 The timing of the MP’s suspension is difficult for the Tories, the DUP and SF, writes Ruth Dudley Edwards 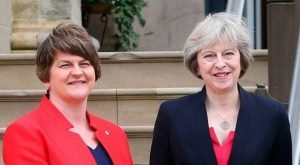 Arlene Foster with Theresa May

I can’t pretend to be astounded by the news about DUP MP Ian Paisley in relation to eye-wateringly luxurious and undeclared free holidays in Sri Lanka that have incurred a 30-day suspension by the House of Commons standards committee for “paid advocacy”.

His enjoyment of the good things in life sometimes appears to cloud his judgment and do him and others serious harm.

You have to hand it to Mr Paisley. Simultaneously, he has presented Theresa May, Arlene Foster and Mary Lou McDonald with headaches.

I should explain that Mr Paisley and I don’t always see eye to eye.

We have met in the past, in the late 1990s, at a time when I was keen on the Belfast Agreement and he and his late father appeared – it seemed to me – unhelpful to making an accommodation in Northern Ireland.

I’ve also been unhappy that he claimed big expenses (£232,042.33), along with having one of the worst attendance records in parliament.

And I’ve really been worried that he so vigorously fought UK libel reform and – successfully, with the help of Sammy Wilson – halted the extension of the Defamation Act to Northern Ireland.

I care deeply about peace and reconciliation in Northern Ireland, but I also believe that to get there we have to have a commitment to free speech and truth.

One of the things I admired about the Rev Ian Paisley was that he was as robust in accepting criticism as he was in making it, and that as someone who was strong in his criticism of his opponents, he didn’t sue when they criticised him.

And he also certainly showed style in his later years in the way he projected with Martin McGuinness a new vision of Northern Ireland to the world.

But, back to the worried women.

Well, for Mrs May, it’s straightforward. From September 5, when the House returns, at a time when she has no majority, for 30 working days the DUP, on whom she depends, will be unable to field one of its 10 crucial votes.

So his absence could bring down the Government or wreck Brexit, neither of which outcome I would think he would welcome, for he has been eloquent in his support for the DUP line.

Admittedly, Mrs Foster has no reason to love Mr Paisley who, since his father’s death, has positioned himself within the party as an apostle of peace and reconciliation.

His fervent thank you to the ailing McGuinness for all he had achieved with Ian senior on his “remarkable journey”, and his implicit criticism of the party leadership, were regarded by cynics as a) a way of burnishing his father’s legend, b) undermining anti-Paisleyites in the DUP, and c) positioning himself for a leadership bid.

Should she back him or renounce him, bearing in mind that she and others in the DUP leadership said Barry McElduff should have immediately resigned his seat after the Kingsmill scandal?

If a recall petition triggers a by-election, should he be the DUP candidate, bearing in mind he would almost certainly stand as an independent if he isn’t?

Then there’s Sinn Fein, who regard Mr Paisley as helpful for assiduously building up the mythology of the Chuckle Brothers in a way that boosts St Martin.

And with new Executive negotiations a possibility, his exhortations to unionists to play down past IRA history suits it even better.

There are many things that stick in my craw with Sinn Fein, and its false piety often tops the list. But I understand that, bearing the Barry McElduff episode in mind, it had little option but to call for the MP’s immediate resignation.

This will, of course, strengthen support for Mr Paisley among those who don’t much care for being lectured on financial probity by the party that is living well off the hidden proceeds of the 2004 Northern Bank robbery.