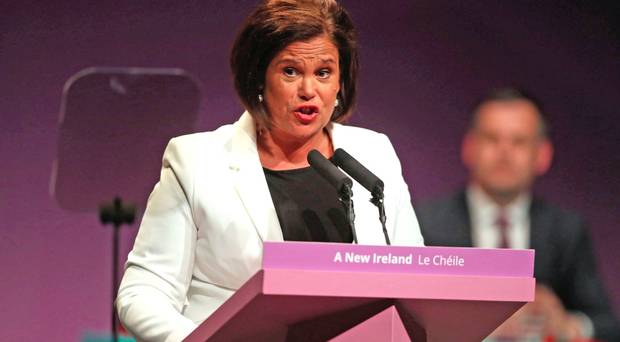 She may be president of Sinn Fein, but U-turn over border poll shows she has to follow orders from Belfast, says Ruth Dudley Edwards 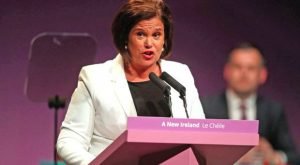 What an unsettling week for Sinn Fein’s Mary Lou McDonald. And she was riding so high at home and abroad. Interviewed sympathetically by the prestigious British liberal weekly the New Statesman, under the headline ‘The new face of Sinn Fein’, she had dealt skilfully with a query about allegations that she “is in thrall to the party old guard; that Adams and IRA alumni still pull the string”.

“I don’t have to say how misogynistic that is,” she responded presidentially.

That was just a few days before last Monday when she attracted many plaudits for her sensible statesmanlike and unexpected recommendation that any border poll be shelved until the uncertainties of Brexit were resolved.

“It is not my preferred option or our preferred option that we deal with the issue of Irish unity in a climate that is unsteady or unstable or chaotic, in other words in the context of a crash Brexit or a very hard Brexit,” she said.

There was some squealing from hardline republicans which led to a hasty McDonald tweet: “No policy shift. Unity debate underway. Chaotic/crash Brexit not best mood music 4 referendum. But referendum will happen one way or another.”

However, within 24 hours, the mighty men of the Falls Road Felons Club had reminded her who was in charge, and she called for a poll as soon as possible.

“Well-placed Northern sources contacted on Wednesday noted with some dejection what they saw as a definite rubber-burning U-turn by McDonald,” said the Irish Times report.

One “dispassionate Northern observer” told the newspaper they had thought her comments “brave and refreshing, that Mary Lou was saying I am a different type of Sinn Fein leader, that I am my own woman, and that was good to see”.

But, added the source, “by Tuesday it was clear that others in the leadership saw her as going too far. And they hauled her back. And that was very sad to see”.

The Irish Times, which many of Sinn Fein’s critics find far too inclined to wishful thinking and giving the party the benefit of the doubt, said in its editorial that it couldn’t “avoid the suspicion that an inner circle of the republican movement made it clear to McDonald her initial response was not acceptable”.

If that was so, “then the leopard, after all, has not changed its spots”, which raised questions about its fitness for coalition in the Republic.

As she rushed dutifully around Northern Ireland debating politely with unionists, hurling herself into Pride festivities and eulogising hunger strikers, this woman for all seasons probably didn’t have much time to think about the mess in her party on the other side of the border.

Allegations of a bullying culture just won’t go away.

Last week councillor Paul Hogan, a former mayor of Athlone who had just missed being elected Sinn Fein TD for Longford-Westmeath at the last general election, resigned after 20 years of membership “with a very heavy heart”.

Citing “an unrelenting bullying campaign” – which he alleges included a kangaroo court, threats, intimidation, witch-hunts and whispering campaigns – that he says the party covered up, he predicted that it would “attempt to pigeonhole this hate campaign against me as a localised dispute. All the evidence that I have suggests otherwise”. Having kept a close eye on the haemorrhaging of elected representatives in the South – more than 10% of its councillors in three years, a Senator and a TD – I concur.

Unhappiness is widespread, and other resignations have come from Cavan, Dublin, Galway, Kildare, Kilkenny, Limerick, Tipperary and Wicklow.

It’s the toxic culture that is mentioned time and time again, with allegations including abuse, assault, harassment, hostility, slander, aggression, death threats and “orchestrated bullying”. Tipperary councillor Seamus Morris spoke of a “nasty culture in the party who believed in dictating to councillors from darkened rooms”.

And several have claimed that they were expected to take orders like robots. The defence that all Irish parties behave like this is risible.

Only Sinn Fein is run from behind-the-scenes by IRA veterans, who from Northern Ireland run its intelligence department, control its finances and direct its strategy.

Ms McDonald did not get where she is today by standing up to them.