Omagh bombing: Families enduring anguish and how quest for justice still goes on 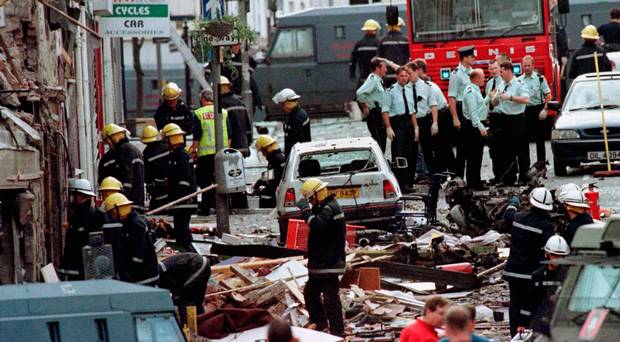 Twenty years after the bomb which killed 31 people, their relatives continue to fight on for the £1.6m in damages, writes Ruth Dudley Edwards 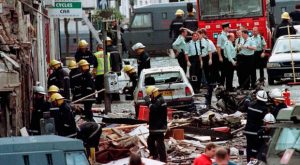 Bomb horror: the aftermath of the Omagh explosion

This Wednesday, August 15, 20 years after the terrible Omagh bomb, I’ll be at St George’s School in Weybridge in Surrey for a service at the grave of James Barker.

A happy, kind and loving boy, he was 12 when he was murdered when out with friends on a sunny Saturday afternoon.

It was the busiest shopping day of the year – not least for school uniforms – so among the crowds was a disproportionate number of women and children.

There would be 31 people dead when the 500lb car bomb went off in the busiest part of town. The youngest, Eimear and Evelyn Monaghan, were close to being born: the oldest, their grandmother, Mary Grimes, was 66. Only 14 were more than 21.

And there were, too, over 200 physically injured, some of them terribly. Thousands were traumatised.

Apart from the unborn twins, the 31 dead were two babies, three schoolgirls, four schoolboys, six students, four housewives, three shop assistants, a despatch clerk, a shopkeeper, a crane driver, a mechanic, a horticulturalist, a businessman and a retired accounts clerk. It was their very ordinariness that gave them a kind of universality.

The horrors of this carnage in a little country town – the worst single atrocity of the Troubles – were compounded by it having happened three months after the Good Friday Agreement had been approved by voters across the whole island and celebrated by the international press as a happy ending to decades of violence and misery. There would be around 800 books of condolence, with two million signatures delivered to Omagh.

As always happens at such times, politicians promised to go to the ends of the earth to find the perpetrators, and – as usually happens – they failed. Although the Real IRA had accepted responsibility and the RUC were pretty sure who the bombers and their accomplices were, they were hampered by the jurisdictional problems of having most of the victims on one side of the border and most of the perpetrators on the other.

There were also, as with most cases of Irish terrorism, the massive hurdles of intimidation and omerta: witnesses were scared and while republican leaders like Gerry Adams and Martin McGuinness condemned an action they would have defended from the Provisional IRA, they refused to ask their supporters to give any evidence to either the RUC or the Gardai.

By 2000, only one person had been charged in connection with the case. There was terrible frustration among many victims and onlookers, most articulately expressed by James’s father Victor, a Surrey solicitor, and Michael Gallagher, an Omagh mechanic, who lost 21-year-old son Aiden. 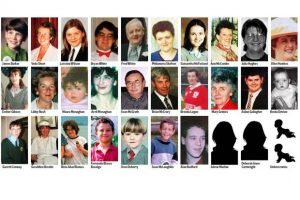 When I first met Victor, he told me of the 18 months he had spent in fruitless correspondence and meetings with British and Irish police and politicians, including Tony Blair, then Prime Minister, Bertie Ahern, then Taoiseach, and McGuinness.

Victor was determined to get justice for James, and was immensely persistent, but he felt he was getting nowhere.

“I’ve wondered about bringing a civil case against the bombers,” he said to me, “but no one takes the idea seriously.”

Michael Gallagher, who had set up the Omagh Support and Self-help Group and was brilliant in dealing with the press and whom I met in June 2000 in Tyrone, did take the idea seriously. As did I, and I introduced Victor to an unlikely collection of people who decided to make it happen.

The core group in London included the ex-Cabinet minister Lord Cranborne (now Lord Salisbury), one of the few politicians with a serious interest in Northern Ireland, who provided wisdom and seed corn money.

His friend Lady Janie Dawnay, daughter of the Duke of Westminster and brought up in Fermanagh, became a key fundraiser and became close to relatives of the families who took the case. There was Sean O’Callaghan, Provisional IRA terrorist-turned-informer who was a terrific networker and a fine political analyst who had vital journalistic contacts. Henry Robinson, an Official IRA terrorist who had become a vigorous enemy of political violence, was a seasoned campaigner and a perennial optimist who bolstered morale when false starts, setbacks, financial crises and the derision we met from most quarters were getting us down. Young and inexperienced solicitor Jason McCue had the imagination and courage to take on an unprecedented case that all other lawyers had turned down immediately as absurd, too dangerous or just impossible; David Greenhalgh, who joined him in 2001, became the trusted confidant of the victims whom Michael recruited to take the case; and the human rights barrister Lord (Daniel) Brennan took the case on, well knowing that in financial terms we were living from hand to mouth.

And at a time when the real IRA was letting off bombs in London, three brave people became trustees of the fund we set up: my old friend Paul Le Druillenec had his tiny staff process the hundreds of mostly small cheques that arrived after we set up the Omagh Victims Legal Fund.

On Sean’s advice we decided to ask Paul Dacre, editor of the Daily Mail, to take the lead on fundraising. Routinely accused by the Left of being heartless, he is a very emotional man with a very clear sense of good and evil and is passionate about the rights of the ordinary man and woman. As a ruthless campaigner against the racist murderers of young Stephen Lawrence, he had named names despite lawyers’ advice. Much moved by the terrible stories from individual victims, he would do the same on Omagh, launching in 2001 a fighting fund and naming as the chief suspects Michael McKevitt, Liam Campbell, Seamus Daly, Colin Murphy and Oliver Traynor.

McKevitt – “a violent, secretive man” according to IRA informer Eamon Collins – was Provo quartermaster and right hand man to Chief of Staff Thomas ‘Slab’ Murphy when in 1997 he fell out with Adams, McGuinness and the rest of the IRA leadership over the peace strategy and founded the Real IRA. He and his wife Bernadette, Bobby Sands’ sister, were utterly uncompromising in their pursuit of a united Ireland through the bomb and the bullet.

The other four had been named as suspects in October 2001 in “Who Bombed Omagh?”, a BBC Panorama programme presented by the indefatigable investigative journalist John Ware. He expressed well what was felt by many journalists who rallied to the victims. “Omagh was so dreadful. Every terrorist murder is, and every family goes through what the families in Omagh went through, but the sheer scale of Omagh! We talked to lots and lots of relatives and these were broken people… I just thought this is such a bloody outrage, and so plainly wrong.”

He was armed with a dossier of evidence from Victor and Detective Chief Superintendent Eric Anderson, who was utterly frustrated by his inability to find evidence good enough against anyone other than Colm Murphy to meet the standards of a criminal case.

Colm Murphy, a successful businessman and long-time part-time paramilitary, had been charged in the Republic for conspiring to cause an explosion – accused of lending phones to the bombers. Liam Campbell, farmer, smuggler and terrorist, was the Real IRA’s Director of Operations who planned the operation who had recently been charged in the Republic in October with membership of an illegal organisation. Daly, with McKevitt, but not with Traynor, would be the defendants in the civil case along with Seamus McKenna.

I doubt if anyone would have gone through with the case had they had the faintest idea how long and maddening it would prove to be. In my book about it, the chronology of the legal proceedings takes up 19 pages. There were 22 plaintiffs on the writ of summons against the five men and the Real IRA that was filed with the High Court of Northern Ireland in August 2001 – relatives of Geraldine Breslin, Aiden Gallagher, Esther Gibson, Ann McCombe, Samantha McFarland, Alan Radford, Elizabeth Rush, Thomas and Bryan White and Lorraine Wilson.

Nine of them dropped out as the years went on, exhausted and frustrated. A passage from my book records the findings of the psychologist who had to examine them for the Court. “Dr Cooling listed innumerable symptoms displayed by those he examined, which included anxiety, physical aches and pains, anger, irritability, loss of appetite, weight loss, weight gain from comfort eating, impaired concentration, acute stress, insomnia, claustrophobia, tearfulness, flashbacks, tension, nightmares, poor memory, low energy, jumpiness, suicidal urges, obsessional behaviour, mood swings, panic attacks, sweating, palpitations, hallucinations and breathing difficulties.”

For professional reasons Victor Barker wasn’t on the writ, although he remained a supportive fundraiser and advocate for the whole period. Judgment was finally made in June 2009, when all but Seamus McKenna were found guilty and £1.6m in damages was awarded, but appeals dragged proceedings out until 2013. The defendants – none of whom attended court – were all on what seemed limitless legal aid and a fed-up judge remarked: “This appeal has been characterised by the inclusion of every conceivable technical objection to the judge’s order. The case generally has spawned much interlocutory litigation where, again, every possible ground on which the action might be frustrated has been canvassed. There has been satellite litigation challenging the grant of funds to the respondents for the legal costs of the action.”

We had almost no help from Northern Ireland politicians – except David Trimble, who made a personal donation of £5,000. The case would have collapsed had it not been for one of our most consistent supporters – ex-Secretary of State Peter Mandelson. In mid-2003, when having raised and spent £1.2m on legal fees the campaigners were broke, he twisted Tony Blair’s arm to provide legal aid. Jason McCue’s colleague Matthew Jury has been doggedly pursuing the guilty for the damages: Daly in Northern Ireland and Campbell, McKevitt and Murphy in the Republic. Yesterday he reported: “We believe that from the outset of the civil proceedings, the bombers went to great lengths to dissipate and conceal assets. Given their continued refusal to pay the damages due to their victims, and after the Irish legal team’s extensive investigations and cross-examining of the bombers in court, we have now started the process of transferring the matter and all available information to the Irish state to bankrupt the bombers and recover all of their assets, so as to enable the judgment obtained by the Omagh families against the bombers to be enforced.”

Those brave people bereaved by the bomb may yet never get a penny, but they have achieved a great deal. As Mandelson put it, “they turned tragedy into triumph”. By sticking with the campaign to show people that all terrorists do is bring heartache to decent people, they shamed them in their own communities and added an urgency to police operations that had them pursued into the criminal courts (although the limitless legal aid has let some of them off lightly). They have inspired the bereaved from other atrocities like the Birmingham and Hyde Park bombings to try to follow in their footsteps.

Now, with atrocious legacy proposals coming from the Northern Ireland Office, is the time for us all to remember our priority should be to stand with victims and against perpetrators.

As I stand by James Barker’s grave on Wednesday, I will be thinking of them all.

Ruth Dudley Edwards is the author of Aftermath: the Omagh Bombing and the Families’ Pursuit of Justice