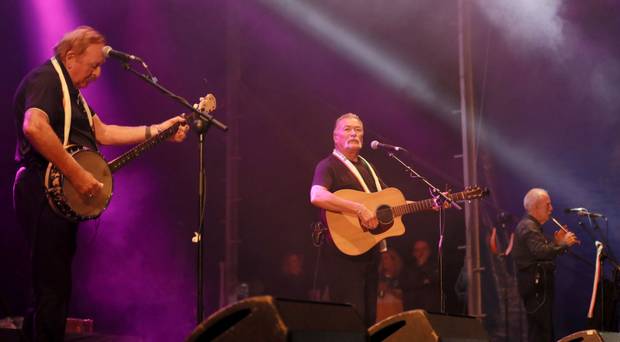 A festival with The Wolfe Tones top of the bill can only send one message to unionists, says Ruth Dudley Edwards 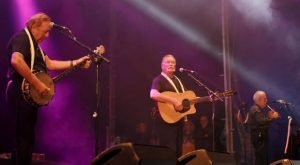 If you book The Wolfe Tones, you’re licensing a group to sing rabble-rousing songs about how the IRA stood up for Mopes (most oppressed people ever) and will not rest until there’s a united Ireland, and it’s your fault that young, impressionable kids imbibe and celebrate a message about the legitimacy of political violence.

So if you’re the Taoiseach and agree to launch a festival that will have as its final event a Wolfe Tones concert, you should condemn that message trenchantly.

I was talking about this with my old friend Henry Robinson last week after reading damning reports of sections of the crowd waving tricolours daubed with Provo graffiti along with loud chants like “Ooh, ah, up the ’Ra”.

We were walking out of a graveyard in Surrey after a moving service commemorating James Barker, a 12-year-old murdered (yes, Jude Collins, murdered) by the Real IRA in Omagh in 1998.

(According to Mr Collins, the poor chaps merely sought to inflict commercial damage on the town in the name of Irish freedom. He failed to explain why people who wanted no casualties would leave a bomb in the early afternoon of the busiest shopping day of the year.)

This led us into reminiscences of our visit to the Feile almost two decades ago. I had been invited to be on a panel about politics which included a unionist and was, I think, the first attempt by Gerry Adams, to have what might be represented as a cross-community event.

I chose Henry because he was brave and adventurous, and also to annoy my hosts, as for a long time, running Families Against Intimidation and Terror, he had been a powerful public critic of the brutality of paramilitaries of all stripes.

Our minder Danny Morrison had to hustle us out the back door at the end because some of the 800-strong brainwashed audience were beside themselves with rage over some of my blunt criticisms of the Provos and, particularly, Mr Adams, who lost his temper and attacked me (mostly inaccurately) from the floor to great applause.

Having been assured we were welcome to any event, the following day we went to a musical happening at the Felons Club.

The denizens were not exactly welcoming, yet they knew that as a participant in the festival, they were required to put up with me, but they became cross when they identified Henry. 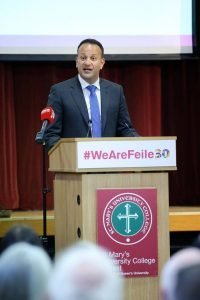 The Taoiseach, Leo Varadkar, was in West Belfast today to launch the 30th anniversary events programme of Féile an Phobail, the West Belfast Community Festival, at an event in St Marys University College on the Falls Road – Credit: Kelvin Boyes / Press Eye.

“You’ve no right to be here,” one of them hissed at him as he and I joined in a particularly catchy rebel song.

But as he said last week, he was clearly the wrong kind of felon. For he had recognised the truth about paramilitary evil while in jail for being a member of the Official IRA and shooting a Provo in the leg.

Since the audience was exclusively republican, and we were obviously teasing, I didn’t worry about being thought to endorse the song’s message, but a Wolfe Tones public concert is a different matter.

I went to one in Kilburn in the 1980s out of curiosity and was appalled to see IRA badges being sold outside and thousands of young people singing with wild enthusiasm in support of murderers and thugs killing and maiming every day because of a poisonous sectarian ideology.

I had a drink with a Wolfe Tone afterwards and asked him if before writing his song eulogising Patrick Pearse he’d read my biography of him.

He said he’d begun it, but had stopped because of the negative bits.

There was no getting through to him at any level.

Here’s the chorus, with its clear message: “The poet and the Irish rebel, a Gaelic scholar and a visionary/We gave to him no fitting tribute/When Ireland’s at peace only that can be/When Ireland’s a nation united and free.”

The song about James Connolly was a typical exercise in Anglophobia, containing the memorable lines: “God’s curse on you England, you cruel-hearted monster,/Your deeds they would shame all the devils in Hell”.

All their stuff is like that, as Mr  Varadkar and his advisers must well know.

And anti-Agreement republicans who support the Omagh bombers should feel quite at home too.

In his speech at the launch the Taoiseach could have explicitly disassociated himself from events with a political message, like that concert.

He chose not to.

What message does he think this sends to unionists?

Or is he only interested in wooing the party that defends murdering them?