Apologists in Sinn Fein need to be reminded that the IRA were killers, not victims

As republicans dissemble in order to cover up their murderous past, decent people know truth, writes Ruth Dudley Edwards 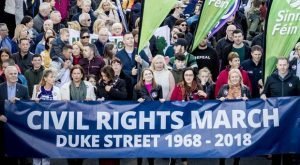 Another week in Sinn Fein’s historical rewriting project brought us a major contribution from Gerry Kelly, one of the 1973 Old Bailey bombers.

Mr Kelly is so proud of his terrorist past that he boasts publicly about such exploits as his shooting of a prison warder in the head during a mass escape.

Last week Sinn Fein responded to the Government’s legacy proposals with ill-concealed delight that the Northern Ireland Office is dancing to its tune, with Mr Kelly adding that during the Troubles the British had been “the main conflict protagonist”.

Since the Government seems happy to grant terrorist perpetrators moral equivalence with innocent victims, I suppose Mr Kelly thought this would hardly raise an eyebrow.

But, strangely, some people made a fuss.

Mr Kelly was all sweet reason the next day – explaining that it was “reasonable for me and for republicans to say that the British were the main protagonists”, but he was prepared to accept “that political unionism, or British soldiers or whoever, wants to say the IRA were a main protagonist”.

Hey, Mr Kelly, just for the record, may I add that many of us think your campaign to achieve public acceptance of some moral equivalence between the murder gang you served and the security forces is an obscenity.

Then, on Saturday, as part of what Eamonn McCann – a leading figure in the civil rights movement from the outset – described as “another instance of Sinn Fein trying to hijack history”, Mary Lou McDonald spoke at an event organised by her party commemorating events of October 5, 1968 in Londonderry with which it had had nothing to do.

Ms McDonald is a mistress of effrontery. “It is an honour to be here in Derry,” she said. “The city of Martin McGuinness, John Hume and now of Elisha McCallion.”

If John Hume, who endured years of intimidation from physical force republicans as he tried to keep the civil rights movement peaceful, were not lost to dementia, he would be outraged.

In fact, he was lucky to get a mention at all, since for some years Sinn Fein speakers have been trying to write him out of history.

Let’s get back to reality by considering some brutal truths about IRA terrorism that were acknowledged in the 6th Annual Service of Remembrance and Thanksgiving held yesterday in the Presbyterian Church in Ballygawley, the scene in August 1988 of an atrocity that killed eight young men and maimed many others.

Organised by the South East Fermanagh Foundation (SEFF), which is doing much to remind us all about the true victims, its purpose was to dedicate the fourth of its memorial quilts commemorating the 15 from British, German, Australian, Indian, Belgian and Dutch backgrounds murdered in mainland Europe by the IRA.

Among those remembered were Heidi Hazell, the German wife of a British soldier shot dead in September 1989 at an Army base in West Germany. The IRA statement claiming responsibility did not apologise and warned civilians “to keep well clear of British military personnel”.

The following month, also in West Germany, Maheshkumar Islania of the RAF was shot while at a service station filling up a car containing his wife and infant daughter. The IRA statement expressing regret for the baby’s death said the killer couldn’t have known she was there.

They produced another “oops” statement after mistaking two Australian tourists in Holland in May 1990 for off-duty British soldiers and killing them.

The main suspect, Desmond Grew, was killed by the SAS a few months later in Armagh while on an operation. At his funeral,Gerry Adams pronounced him “a freedom fighter, a patriot and a decent upstanding Irish citizen”.

The memorial quilt also remembers 15 of the many hundreds of innocents murdered in Spain by ETA terrorists.

A major part of SEFF’s work these days is to encourage victims to work together across international borders, something terrorists have done for so many years.

What is known as the Uniting Innocent Victims Project will be launched on October 16 in the EU Parliament in Brussels jointly by Northern Ireland and Spanish MEPs.

As director of services Kenny Donaldson puts it, SEFF is dedicated to telling “the narrative of truth”.

It deserves the support of all decent people.