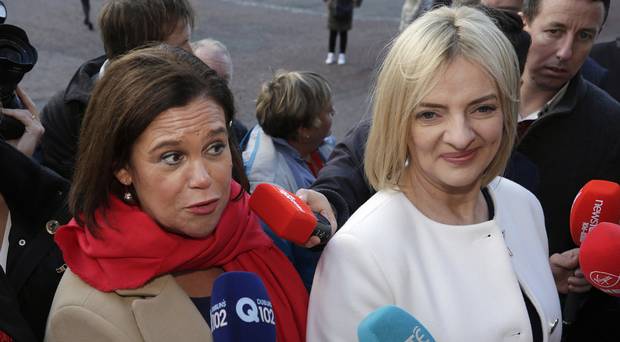 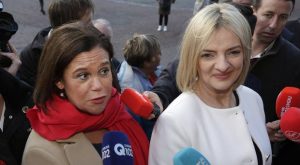 If Mary Lou McDonald was the leader of a normal political party, after the disastrous performance of Liadh Ni Riada in the Irish presidential election, she would, as they say, be considering her position.

But she isn’t. She is president of Sinn Fein, anointed by her predecessor Gerry Adams and his circle, otherwise known as the boys in the backroom.

Ms Ni Riada, the only contender standing as the candidate of a political party, came fourth out of six, which considering the poor quality of her rivals was pathetic.

The figures were: 77-year-old incumbent Michael D Higgins (56%); Peter Casey, whose support surged when he articulated such politically-incorrect concerns as the conduct of the Travelling community (23%); Sean Gallagher, who famously was probably cheated out of winning the 2011 presidential election by a combination of RTE bias and Sinn Fein skulduggery (6.5%), and Ni Riada (6.4%).

She just squeaked ahead of the almost unknown Senator Joan Freeman, founder of a mental health charity (6%), and businessman Gavin Duffy (2%).

Ni Riada’s vote got into double figures only in three constitutencies – Cavan-Monaghan, Donegal, and Dublin Central, a poor area and McDonald’s stomping ground.

So which optimist decided that unlike every other political party, Sinn Fein would put €200,000 into running a candidate, although that required the candidate to win 12.5% of the total vote if the State was to reimburse her?

And who decided that the right choice to attract women and the middle-classes was a little-known MEP who seems almost as devoid of personality and oomph as Michelle O’Neill?

And who thought having an unfamiliar and difficult Irish name would be an advantage?

Or that a central message about the importance of a united Ireland was going to go down well with people who mostly don’t want it – not least because they’re worried enough about Brexit to be terrified of any further upheaval?

Or that the electorate are pining for yet another hectoring feminist progressive?

Casey zoomed up in the polls from sixth to second place mainly because – at a time when Ireland is suffering a housing crisis – he described as selfish and unreasonable the six Tipperary Traveller families who refused to move into the houses the council spent €1.7m building for them because they didn’t have stables and grazing land?

Like many populist leaders in America and Europe, he said what ordinary people thought but were afraid to say. One exit poll said 54% of those who voted for Casey cited his “ability to stand up for ordinary people” as a key reason for their support.

Oh, and who decided to keep Ni Riada’s name under wraps until September 16, rather than have her canvassing the length and breadth of the Republic for months?

Then there was the perplexing decision to leave the Sinn Fein brand off her campaign literature and to have the formidable McDonald mostly noticeable for her absence.

It’s understandable that Ni Riada seemed attractive because she didn’t join the party until a few years ago, and that, as a Sinn Fein member put it, meant “less IRA stuff coming up”.

Yet although she didn’t enthusiastically extol killers, she was required, like all Sinn Fein candidates, to pussyfoot, showing more decency than most of them by describing the Enniskillen bombing as an atrocity that “should be condemned”, but then floundering with “but look, the IRA have been gone the last 20 years, we have a peace process in place, we should be cementing that and working on building that rather than constantly revisiting what labelling and semantics and all of that”.

Ms McDonald already has an awkward issue over several revelations that emerged last week in the RHI Inquiry, including the information that Mairtin O Muilleoir was asking permission from unelected IRA ex-convicts like Martin Lynch and Padraic Wilson to make a key decision in his capacity as Finance Minister, which sits oddly with McDonald’s insistence that Sinn Fein is a normal democratic party.

As a historian, I sure hope MI5 are recording for posterity whatever showdown the backroom boys have with their protege.