Legacy Scandal: ‘London and Dublin must not let IRA snatch victory from jaws of defeat’ 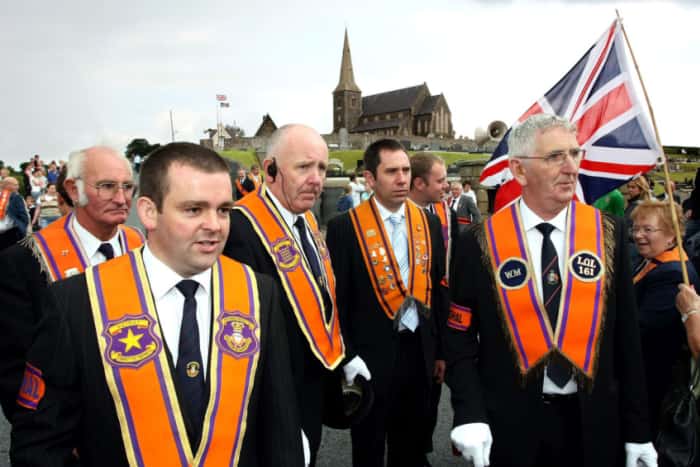 In the latest essay in our series, RUTH DUDLEY EDWARDS writes that the NIO has come up with is a Sinn Fein wish list on legacy, but it is not too late to fight back 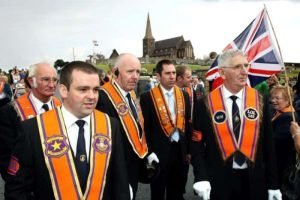 Orangemen at Drumcree. “Neither government seemed to see what was obvious about Drumcree ‘ that republicans were creating the conditions in which they could secretly foment violence, destabilise N. Ireland, and present themselves on the world stage as victims of bigotry”

In four decades of following events in Northern Ireland closely, I’ve seen much that appalled me, but the legacy scandal is particularly horrifying.

If the British and Irish governments aren’t shamed into repudiating this squalid monument to appeasement, so ably analysed in this sequence of essays, they will, quite simply, be letting terrorists snatch victory from the jaws of defeat with shocking effects on the future of the whole island.

The IRA leadership isn’t stupid. It knows very well that it was defeated by the security forces and is relentless in its mission to rewrite history so as to persuade the young as well as future generations that it won.

It does this by the perversion of truth, the contamination of evidence and the cynical use of the institutions of a liberal state against its most loyal servants.

I come from an Irish nationalist, Catholic (though not sectarian) background and was born, brought up and educated in Dublin, but in my late 20s I became a British civil servant.

After jumping ship to become a freelance writer I attended innumerable Anglo Irish conferences, and I came to know officials and politicians from both governments – particularly those from the Northern Ireland and Foreign Offices and the Irish Department for Foreign Affairs.

As they worked together before and after the 1985 Anglo-Irish Agreement, I realised that foreign office diplomats were so anxious to see the point of view of the Irish that they were forgetting their duty to stand up for unionism – let alone the security forces who had saved the province from civil war.

It seemed to become widely accepted that the British government must be even-handed but that it was fine for the Irish to be part of a pan-nationalist front with nationalists of all stripes including those of Irish-America.

That attitude became ingrained and goes largely unquestioned. A country that had almost no supervision of its police force supported republican demands to emasculate the RUC and make the PSNI the most scrutinised force in the world.

Latterly, with Fine Gael apparently looking to form a coalition with Sinn Fein after the next election, you have an Irish prime minister opening the West Belfast Festival without one word of criticism of its eulogising of terrorists and bank robbers, and a foreign minister who blunders into disputes about the Irish language and prison conditions for dissidents that are none of his business.

It shocked me in the 1980s how little most diplomats seemed to understand what they were dealing with. John Hume dictated policy to the Department of Foreign Affairs, which persuaded its UK opposite numbers that concessions to nationalism would change the hearts and minds of republicans and that alienating unionists wasn’t a problem since they wouldn’t resort to violence.

In his arrogance, John Hume believed he could persuade republican leaders to follow him: instead, he unwittingly gave them a legitimacy that would ultimately enable them to displace his party.

As a journalist from 1993, I spent time trying to explain to unionists how the southern Irish establishment thought, and to the Irish and British the reality that Sinn Fein was gradually learning how to get its way with diplomats from both jurisdictions (and later, the US) through a mix of charm, cunning and threats.

Neither government seemed to see what was obvious about Drumcree – that republicans were creating the conditions in which they could secretly foment violence, destabilise Northern Ireland, and present themselves on the world stage as victims of bigotry and brutality.

What they succeeded in doing was tapping into the tribalism that is not far under the surface in the Republic. Both governments were in thrall to the peace process, which was used by officials and the nationalist establishment to sweep IRA misdeeds under the carpet.

The few journalists who pointed the finger at paramilitaries were accused of being anti-peace. It was impossible to dislodge the misconception that republicans would embrace peace and become democratic politicians as Irish revolutionaries had in the 1920s.

When Tony Blair swept into power in 1997, determined to become a great peacemaker, it was not long before the republican negotiators who had feared the machinations of Perfidious Albion were sniggering to each other after visits to Downing Street about “The Naïve Idiot”.

As far as the two governments were concerned, the 1998 Belfast agreement was supposed to solve everything, and the default position was to clear every new hurdle with another bribe for Sinn Fein.

When David Trimble was displaced by Ian Paisley, there was no senior unionist negotiator who really understood the republican gameplan. It was on Paisley’s watch that in 2005 the constant republican demand that there be no hierarchy of victims was enshrined in a government document defining a victim as “the surviving physically and psychologically injured of violent, conflict-related incidents and those close relatives or partners who care for them, along with the close relatives or partners who mourn their dead”.

As Sinn Fein diligently continued spinning their lying narrative about the past, as young people were told that the British state was behind most paramilitary murders, that nationalists had had no vote and that the IRA had had to fight for equality and human rights, few unionists did much to make their case in either Dublin or London.

The Sinn Fein leadership directs a ruthless cult intent on gaining power in the Republic and then bullying Northern Ireland into a united Ireland. As the contributors to this series have laid bare, what the NIO has come up with is a Sinn Fein wish list. But it is not too late to fight back.

The DUP are in an unprecedentedly strong position at Westminster and have no excuse for not making the complete revision of these obscene legacy proposals their priority.

They should have a task-force at work studying the many brilliant suggestions that have been made here in order to make truly equitable proposals about how the law can be upheld, the justice system can favour victims rather than perpetrators, the police can be saved from a system designed to discredit them and the story of the troubles can be told by historians.

Few of Sinn Fein’s opponents bother to tell the wider world what is going on here, but it is vital that the republican narrative should be countered at every turn in Dublin and London as well as Belfast.

It’s no good blaming politicians and journalists and civil servants for misrepresenting what happens here.

If you don’t bother to make your case about it publicly, you will lose the argument. Deservedly.