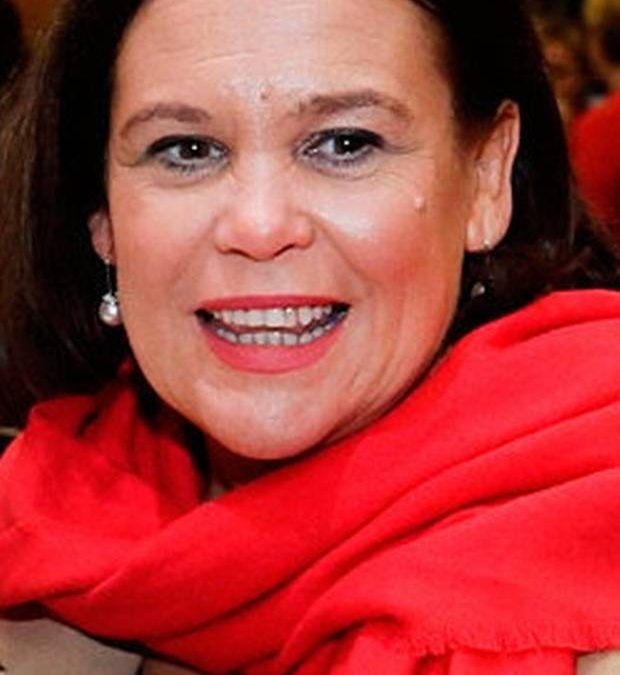 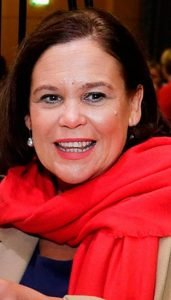 So who really runs Sinn Fein? The same people as always, mostly. Despite what seem to be Mary Lou McDonald‘s occasional attempts to break free of them, those boys from the back room in Sinn Fein’s Belfast HQ, Connolly House, ain’t going anywhere.

After the fiasco of the presidential election, when she convinced them that Sinn Fein should force an election and would do better than St Martin McGuinness, she’s been seriously weakened. Apart from anything else, they’ll be mansplaining to her, she should have selected a northerner – as they wanted – instead of a charisma-free southerner, Sinn Fein’s new-found progressiveness made no headway with women or the young, and it has cost Sinn Fein €200,000.

The last few weeks have provided more evidence of who – apart from public figures like Gerry Adams and Gerry Kelly – are the SF decision-makers. Last week saw the publication of Adams’s The Negotiator’s Cookbook – Best Kept Secret of the Irish Peace Process, which, he explains, was written with the help of “culinary master” Ted Howell and “master baker” Padraig Wilson. It can be purchased from the Sinn Fein bookshop in an “Irish Volunteer Apron Bundle”.

My researches show a decidedly non-sexist apron featuring a regulation dark green coat, with a Sam Browne belt and some handy pockets for ammunition.

If you’re looking for an image that sums up the difference between the worlds of the past and present presidents of Sinn Fein, imagine Ms McDonald sporting that for the benefit of press photographers.

What is significant is that these two key negotiators are being deliberately brought out of the shadows. In showcasing Wilson, Adams is putting two fingers up to critics and public alike. Wilson was not only a feared enforcer on the streets of Belfast until charged with possessing a bomb, but while in jail from 1991 he was Officer Commanding IRA prisoners and so influential that he was allowed out by the authorities from time to time to sweet-talk hardliners. We occasionally hear of him. For instance, Mairia Cahill alleged he was a key figure in the kangaroo court investigating her rape. She told a court that at one meeting he had said “I’m not from the Belfast Brigade, I’m not from Northern Command. I’m not from GHQ (General Headquarters Staff), I’m from the top of the top. I’m from the Army Council”.

The normally secretive Mr Howell is a different matter. In his A Secret History of the IRA, Ed Moloney described him “as arguably one of the most influential figures” in the Provisional movement. During the years running up to the 1994 ceasefire, when he was chairman of its think tank, there was “hardly a document submitted to the British and Irish governments or to the SDLP by the republican movement that was not either written or vetted by him, or whose contents he had not influenced.”

Howell was also the key diplomat who forged the links between Adams and American support groups including the Irish publisher Niall O’Dowd and billionaire Chuck Feeney. And during the 1998 negotiations that led to the Agreement, Adams described him as the only person who knew what was going on. No one is alleging he has been anything other than what might best be described as a high-grade Sinn Fein civil servant, but since his schooldays with Gerry Adams, he has been his most trusted adviser and counsellor and faithful right-hand man.

The names of Messrs Howell and Wilson came up in some crucial emails the other week during the embarrassing public inquiry into the Non-domestic Renewable Heat Incentive Scheme (AKA the RHI Inquiry), which has been an extraordinary eye-opener about the way Stormont operated. It has turned out, that in the DUP, it was powerful special advisers (Spads) who were allowed to take most of the decisions on a scheme which has enriched a few and cost a fortune, aided by a demoralised civil service – bullied by both big parties – that was simply not doing its job.

The RHI scandal was in theory the issue that brought down the executive in January 2017. As DUP ministers and Spads have wriggled on the hook, Sinn Fein seemed to be in the clear, yet that changed when emails they were required to disgorge became public.

For a start, it emerged that Sinn Fein had deliberately flouted the 2013 law banning people with serious criminal convictions from being Spads. In most cases, now paid by the party, they continued to do their jobs. Ex-convict Aidan McAteer became in effect the Super Spad, who told all the others and their ministers what to do at the behest of Connolly House.

Sinn Fein had been in no hurry to have the scheme wound up, and, it turns out, even after its closure was agreed with the DUP, lobbied hard to keep it open for an extra two weeks so. Sinn Fein deputy leader Michelle O’Neill sent a worried email about people being “left high and dry”. Finance minister Mairtin O Muilleoir was seeking instructions from Wilson and Martin ‘Duckster’ Lynch, Gerry Adams’s former chauffeur and bodyguard, who served 10 years in prison in the 1990s for having, among other incriminating possessions, a Russian-manufactured rocket-launcher.

But when he felt it would be impossible to delay it any longer, it was to Howell that O Muilleoir sent the query: “Would you be content if I were to sign off on the business plan on Wednesday afternoon?” The extra time they had manoeuvred allowed another 300 to join, at an estimated cost of £91.5m.

Like all of the Republican movement, they want to destabilise Northern Ireland and take power in the south, while having nothing but contempt for what many privately call the Free State.

And these are the people to whom Mary Lou McDonald reports.