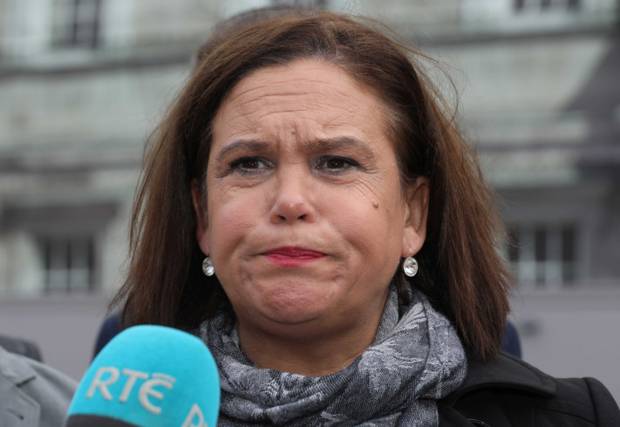 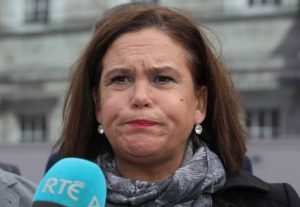 Bearing in mind that Mary Lou McDonald persistently denies that her party’s haemorrhaging of elected representatives is the result of an endemic culture of bullying, this was a bad week.

If she was catching up with press coverage on her iPad as she scoffed her morning Cheerios, she could hardly have been happy. There was further coverage of the resignation of senior TD Peadar Toibin over the party’s refusal to allow him to follow his conscience over abortion.

He was now reporting the recruitment to his new pro-life republican party of past and present elected representatives as well as St Martin McGuinness’s brother Declan, who is helping to get it going in time to contest next year’s local elections.

Then there was the Sunday Life story illustrated by a fetching photograph of four all-dressed-up Sinn Fein women on a night out. It was dominated by the instantly recognisable Mary Lou herself – in the midst of a group with rather too interesting pasts, which were spelled out.

There was the current Belfast Lord Mayor Deirdre Hargey, who hit the news 13 years ago when she was dropped as a prospective election candidate for Sinn Fein and temporarily suspended because of an international scandal after the murder of Robert McCartney.

Hargey had been in Magennis’s bar on the night that – after a dispute inside – McCartney was murdered outside by IRA thugs. Her friend, senior Provo Jock Davison, who was thought to have ordered the killing and was himself murdered in 2015, had been also there. Like the other 70 people present, Hargey had claimed to have witnessed nothing and the IRA had cleaned up the pub.

As his sister Catherine McCartney had pointed out in June, when Hargey became mayor and was faced with difficult questions, extending her condolences and calling for justice was hypocritical since she had done nothing to help either the police or the family, who had been bullied out of their neighbourhood by “a well-oiled rumour mill and ostracism exercise” which had led to them being “shunned, vilified and demonised”. (As various ex-party members have explained over the last few years, this is what Sinn Fein does to members who fail to obey orders unquestioningly.)

“The ‘I saw nothing’ line is not good enough for someone who is now first citizen of Belfast,” said McCartney, but, so far, Hargey has got away with it.

Beaming along with the others in the photo is Mary McArdle, part of the IRA gang that in 1984 attempted to murder Resident Magistrate Tom Travers by shooting him six times and killed his daughter Mary with a shot in the back. Sentenced to life imprisonment, McArdle would end up as a special adviser at Stormont to another convicted terrorist, Caral Ni Chuilin, by then Minister for Culture.

The fourth member of this jolly group is Shauneen Baker, who met and made friends with Ni Chuilin in jail where she’d been sent for trying to blow up Belfast International Airport. They would later become related by marriage, with Baker working for Ni Cuilin as an office manager. An enthusiastic Sinn Fein activist, she was given the honour of reading the IRA Ardoyne roll of honour at the 2016 opening of a republican commemoration garden.

The reason the photograph was in the news, was that to celebrate being selected to run as a Sinn Fein candidate for a seat on Belfast City Council, Baker posted it on social media.

“To the outside world this looks like a normal girls night out,” tweeted Mary Travers’s sister Ann. “To some of us affected by murder and cover-ups it evokes feelings of sadness, loss, betrayal and hopelessness.”

Someone less belligerent than McDonald might have thought that with social media excited by the company she was keeping, this was a good time to keep her head down – not least because she was also facing a meeting with the formidable Mairia Cahill – but that is not the way the lady operates.

Instead, on Tuesday, she gave a masterclass in bullying. With the Dail chamber full of current and former female members of the Oireachtas gathered for a group photograph commemorating the centenary of women being able to vote and stand for election, McDonald “stomped in like it was the OK Corral”, said former minister Niamh Breathnach, and fumed when she saw her usual seat occupied.

“Who gave you permission to sit there?” she demanded angrily of Mary Hanafin, who explained it wasn’t a normal Dail sitting and that everyone was following the arrangements laid down by the ushers, who had allocated the front row seating for serving and former Cabinet ministers.

When McDonald said she wouldn’t sit for the photograph until she got her seat back, Hanafin asked her politely to check with the usher. He apologetically asked Hanafin to find a seat somewhere else. Presumably he knew that standing firm could cause an important symbolic occasion to be wrecked.

It was “bullying, pure and simple”, said Hanafin afterwards, but it was she who won the high moral ground. McDonald skipped the lunch that followed which apparently was full of great laughter at her expense and suggestions that Hanafin should have said: “You and whose army?”

She then had to face the ordeal of having what she described as a “lengthy and candid conversation” with Mairia Cahill, who asked her difficult questions about her failure to admit the truth about the IRA’s shocking response to her abuse. Later Cahill was excoriating on the broadcast media and on Twitter where she accused McDonald of ” an abdication of responsibility, bluster and spin, or what I described to her as ‘bulls**it’.”

Mary Lou has learnt some very bad lessons from the boys in the Belfast backroom. If she really is ambitious to be in government, maybe it’s time she found someone to teach her good manners.