‘How can any party go into coalition with toxic Sinn Fein?’ 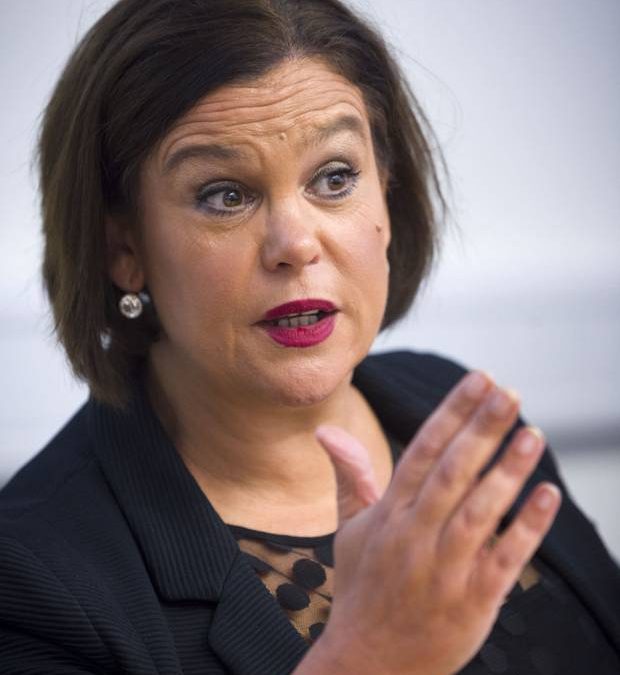 When I put myself in Mary Lou McDonald’s shoes, I can almost feel some sympathy for her 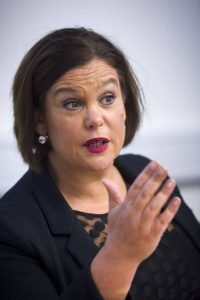 Even the Taoiseach – who up to now appeared to be in blissful ignorance of who runs a political party he’s been intermittently wooing with an eye to the next coalition – has had to face up to and reveal publicly some unignorable facts about her unsavoury party.

As emerged a few weeks ago in the Renewable Heat Incentive (RHI) inquiry hearings in Northern Ireland, Sinn Fein – who was claiming to have abandoned Stormont because of its horror about DUP corruption – had been in the same game. It turns out the political wing of the IRA – that gang financed by robbery, smuggling, benefit fraud and so on – turned out not to have clean hands when it came to ripping off the taxpayer by taking advantage of a flawed energy-saving scheme.

And what’s more, it was doing so at the behest of a shadowy ruling cadre of veteran republican grandees.

I try not to brag, but when a long time ago I was first told about how DUP special advisers (SPADs) appeared to have been helping friends and relations to take advantage of a set-up approved by civil servants and politicians that enabled them to make pots of money by burning subsidised wood pellets (‘Cash for Ash’, as it became known), I asked where Sinn Fein was in this.

Nowhere, I was told. It was exclusively DUP stuff.

That, I said, was ridiculous. If there was any free money going, they would have their grubby hands on it on behalf of their party and its supporters.

But in his tear-stained letter of resignation pulling down Stormont, Martin McGuinness had certainly pinned the blame on his coalition partners. He explained piously that “the DUP’s handling of this issue has been completely out of step with a public mood which is rightly outraged at the squandering of public money and the allegations of misconduct and corruption”.

Owing to being well aware that McGuinness was still on the IRA Army Council he claimed no longer existed, that had authorised in 2004 the multi-million-pound robbery of the Northern Bank, I didn’t believe him for a moment, but there was no firm evidence until recently, when it emerged – as Leo Varadkar explained last week in the Dail – they had been well and truly involved.

Micheal Martin put it more strongly. “I have absolutely no doubt but that the collapse of the Executive and the Assembly was contrived nearly two years ago by Sinn Fein for political reasons. Allegedly, it was over the renewable heat initiative. We now know Sinn Fein was involved in trying to keep that extended as well. The degree of cynicism involved in that act was extraordinary.”

It had also emerged, as the Taoiseach explained, that the relevant Sinn Fein minister (the ever-sanctimonious Mairtin O Muilleoir) had been seeking the approval of senior unelected republicans to OK signing off the scheme.

When I try to put myself in her shoes, I can almost feel a tiny bit of sympathy for Ms McDonald. Gerry Adams was taught over years how to defeat interrogators by lying shamelessly, and when he got into a tight spot, he had his partner-in-crime – the shrewd Martin McGuinness, to consult. And, of course, he had Ted Howell, his life-long friend, emissary and strategist – a contributor to his cookbook after whom one of his teddy bears is named.

Mr Howell was name-checked by the Taoiseach in the Dail as one of the non-elected senior republicans to whom Sinn Fein ministers deferred.

Mary Lou really only has Adams, who is tough and able but often shows rotten judgment, as, for instance, when he got so hooked on transforming the party into New Sinn Fein the Progressive Party, that he over-rode McGuinness’s wishes and appointed the light-weight puppet Michelle O’Neill as his successor rather than the toughie Conor Murphy.

Who is there down south whom she can consult when trying to cover up the past and present crimes of the IRA? Martin Ferris certainly has a distinguished IRA pedigree, having done time for importing weapons of mass destruction, but he and fellow southern veterans are thick, the bright, lily-white Shinners are either naive or after her job, and the most principled of them, Peadar Toibin, has gone off in disgust at his ill-treatment to found a potentially dangerous rival.

McGuinness had the charisma to keep the hard-liners happy and Stormont afloat, but Adams could not and so McGuinness was forced at death’s door to kill the thing he had come to love. Then Adams came to realise that Sinn Fein – under his tainted leadership – would never be accepted as coalition partners and installed McDonald as his successor. But it’s not working out. How could it?

The problem is that they’re the ones with the poison, and they administer it to her every time she shows any signs of independence. It’s gradually becoming common knowledge that the IRA Army Council still exists, and that amplified by some fellow-travellers, it dictates strategy to Sinn Fein’s elected politicians.

Isn’t it time for our democratic parties in the Republic to say that under no circumstances will they go into coalition with one controlled by an illegal group of thugs who claim to be our country’s true government by right of lineage and violence?