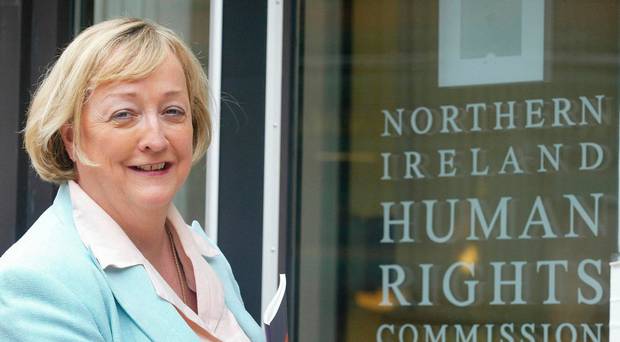 The spaghetti alphabet of organisations seem to have one-track agenda, according to Ruth Dudley Edwards 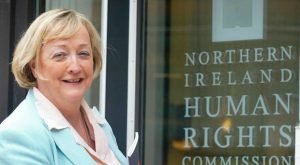 Monica McWilliams, who spent six years as chief commissioner of the NIHRC

When did well-meaning people here concerned about everyone’s human rights appear to allow the organisations they supported to become dominated by nationalists and leftists?

There were clues last week from declassified state files, which included material from 1994 about The Committee on the Administration of Justice (CAJ), judged in a memo produced in the NIO’s Security Policy and Operations Division as having become a “left of centre group with mainly nationalist support” which was “fashionably radical”.

The following year Steve McBride, justice spokesman of the Alliance Party, a one-time chairman of the CAJ, said it had been set up to be “an independent, objective organisation which would take an honest, non-partisan stand on issues of human rights in the North”.

He was “frankly disappointed” that the CAJ of 1995 did not seem to recognise “that the greatest abuse of human rights in Northern Ireland in the last 25 years is that carried out by paramilitary groups”.

When the Northern Ireland Human Rights Commission (NIHRC) was set up in 1999, at least half its members were CAJ.

From 2003, when Monica McWilliams began what would be a six-year career as chief commissioner, the NIHRC was already on the road to reputational ruin.

It was under her leadership that it intervened and supported a case against the PSNI.

In it, the mother of a child caught up in loyalist protests against the route to school taken by Holy Cross pupils alleged an abuse by police of the girl’s human rights, which went all the way to the House of Lords at enormous expense to the taxpayer.

The Lords threw it out, and one Law Lord said the commission had “unnecessarily wasted their time” and that its intervention was of “no assistance”.

This and other activities saw the NIHRC described in the Guardian as “a quasi-political pressure group campaigning single-mindedly for a maximalist interpretation of ‘rights’, which included handing responsibility for socio-economic policy to the judiciary”.

What of the Equality Commission for Northern Ireland (ECNI)? Well, it’s the outfit that took up the case of the gay activist who accused Ashers bakery of discrimination because it would not bake him a cake promoting gay marriage.

The Barnabas Fund, an international aid agency that helps persecuted Christians, pointed out that by refusing equal treatment to the Christian owners of Ashers bakery and actively supporting its opponent, the ECNI thereby “not only denied equal access to justice to enforce the human right of freedom of religion or belief, but was also actively involved in inflicting crippling legal costs” on the McArthurs “who sought to defend this right”.

The attempt to beggar Ashers failed in the Supreme Court, but once more the taxpayer was clobbered as a result of the bias and poor judgment of a government body.

And what of those doughty fighters for “universal human rights and social justice”, Relatives for Justice, who exist to “to support the empowerment of the bereaved and injured of the conflict”? Well, it all depends on the relatives.

As ex-IRA man Shane Paul O’Doherty, who has written another scarifying blog about double standards, put it last week, “while the IRA has endlessly exploited the murder of solicitor Pat Finucane – a solicitor who was reported by prominent IRA member Sean O’Callaghan to have attended senior IRA meetings – it has endeavoured to cover up its own murders of Northern Ireland judges, magistrates and lawyers, a cover-up not at all challenged by the so-called ‘Relatives for Justice’.

I was once a member of Amnesty, but gave that up when I realised that in Northern Ireland it too was interested only in the sins of the state.

Last week this newspaper published another article by Professor Liam Kennedy, who for years has helped those at the bottom of society who’ve been mutilated by loyalist and republican brutes.

It was, he said, “really astonishing” that 20 years after the Agreement, “Northern Ireland is still the black spot in Western Europe for the most serious human rights abuses”.

That Professor Kennedy gets no help from the human rights industry says it all.