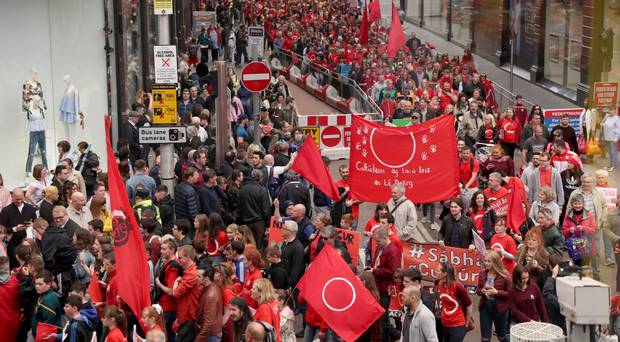 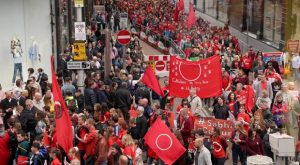 I’m fed up with the all-Ireland double standards that surround a language for which I have respect and affection and once spoke fluently. On Saturday at that nationalist love-in (Beyond Brexit: The Future Of Ireland) at Belfast’s Waterfront Hall solicitor Niall Murphy complained about “the sneering contempt” of the DUP for an Irish Language Act.

“Our language is an intrinsic part of all our identity as citizens, yet we endure contemptuous taunts, such as ‘Curry My Yoghurt’ and ‘Crocodiles’, and the cancellation of microscopic bursaries for the Donegal Gaeltacht.”

For the record I thought Gregory Campbell’s yoghurt “joke” unfunny, was incredulous at Paul Girvan’s stupidity in axing bursaries for visits to the Donegal Gaeltacht, and thought Arlene Foster’s choice of words about Sinn Fein’s demands for an Irish Language Act (“If you feed a crocodile it will keep coming back and looking for more”) unwise, but I completely agree with the sentiment.

As we know from the paucity of Irish speakers among the republican leadership, the language means nothing to most of them except as a weapon for exacerbating tribal passions.

Yet this is not just a Sinn Fein thing. The majority of politicians in the Republic have been utterly cynical about the language for close to a century.

Reviving it was a major objective of successive governments, who made it compulsory in schools and for entry into the professions and the public sector, using a mixture of the stick (for many decades literally as well as metaphorically) and the carrot (a 10% bonus for sitting your public exams through Irish).

Few politicians wanted to admit that the policy was an utter failure.

A running gag when I was growing up in Dublin was that we were all illiterate in two languages.

Few senior politicians had courage to challenge this great deceit until Fine Gael leader Enda Kenny admitted in 2011 that the policy of compulsion had led to a “pervasive, negative association” with the language for many young people and committed his party to making it optional after primary school.

Opposition from Fianna Fail put an end to that. But the brutal truth is that there is a massive shortage of Irish language teachers.

The well-known former Meath footballer, broadcaster and school principal Colm O’Rourke had the guts to say publicly: “There is no one at all to teach Irish.”

The public service can’t get them either; the Department of Health had to admit recently that its Irish Language officer did not know Irish.

What’s happening in the EU is preposterous. Having achieved in 2007 its demand to make Irish an official language (though few MEPs can speak more than a few words of it), Ireland can’t come up with more than a small fraction of the interpreters required despite throwing millions at the problem, which is why a derogation is in place limiting the amount of obligatory translations and interpretations.

Yet with Sinn Fein in full cry in Brussels it’s full-steam ahead to make Irish a full working language in 2022.

Donal Flynn, author of The Revival Of Irish: Failed Project Of A Political Elite, blames “an official elite functioning in a mode of detachment from the general life of the community and pursuing its own linguistic agenda for its own official purposes”.

He recently wrote of its “latest piece of nonsense”, which is to think it can reverse the decline of the language in the fast-shrinking Gaeltacht.

He is horrified by the new Gaeltacht School Scheme, which seeks through total immersion to persuade kids to use Irish in their social lives by teaching them no English at all for their first two years.

“They have taken hostage a few thousand kids in the west of Ireland and are literally using them like mice in a mad scientist’s laboratory.

“A full-on throwback to the worst aspects of the past.”

And guess what? They can’t find enough teachers.

What happens in the south is a farce, and one which Sinn Fein is determined to perpetuate, intensify and force on Northern Ireland with total disregard to financial implications.