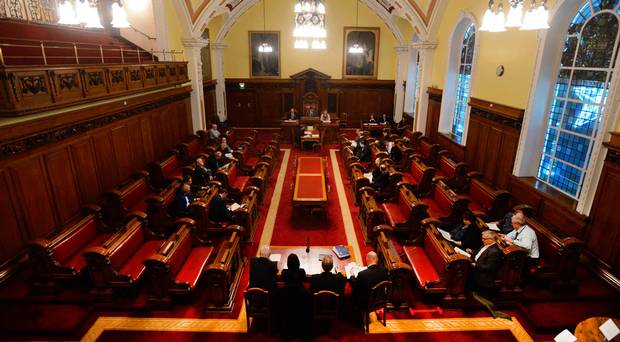 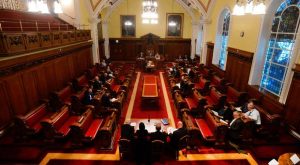 Last week I watched about an hour of the Belfast City Council webcast, which at various times made me laugh, fume, plunged me into gloom and gave me some hope.

Here’s some of what came up last Monday under the umbrella of the strategic policy and resources committee.

There was the request made in December by Brian John Spencer, an artist I like and admire, to make a drawing of the chamber during the January council meeting.

There’s is a long-standing tradition of artists painting parliaments in session, so you’d think councillors would feel flattered.

But Sinn Fein, in a fury over a brilliant Spencer cartoon about the party’s hypocrisy on Kingsmill, had reacted like an old-style Irish bishop (Bishop Brennan from Father Ted anyone?) and at a chaotic meeting had found a way of voting it down.

Last Monday, though, this was challenged eloquently from all sides as censorship that breached Mr Spencer’s rights to freedom of expression.

Realising it was going to lose this time (Donal Lyons of the SDLP described its stance as “absolute farce”), Sinn Fein’s Ciaran Beattie said angrily that even if he got permission, Mr Spencer would not be allowed to draw him or his colleagues.

The moment I laughed was when Sinn Fein’s Arder Carson declared that since it was his democratic right to refuse to be painted, anyone voting for the artist was “censoring me by me having to leave the chamber”.

To their credit, for Mr Spencer spares no one in his cartoons (you should see the one he did of me), everyone opposed Sinn Fein.

This has exposed the party to a great deal of ridicule on social media, but as councillor Jeff Dudgeon pointed out, it’s “a fearsome example of what life will be like if they gain strength at May’s council elections”.

There was some bewildering stuff about the Councillors’ Code of Conduct, which appears to be out of date and mired in bureaucratic procedures hindering the proper conduct of business and are now leading councillors to leave meetings because of technical conflicts of interest.

On Monday this provided the DUP and Sinn Fein with the opportunity to dodge difficult questions about the way in which they dish out to their respective communities financial spoils from the Social Investment Fund and show no sense of responsibility about public accountability.

They certainly show no interest in councillor Dudgeon’s suggestion that a rather better use of some of the £500,000 being thrown at loyalist and republican community festivals to discourage bonfires would be to allocate £200,000 of it for the creation of seven jobs to remove disfiguring and pointless graffiti from the walls of Belfast.

At least on the issue of money being squandered, Alliance and the SDLP don’t usually side with Sinn Fein.

They have done, though, over many issues, including the scandal of the Blitz Memorial.

There is even a Free State dimension, for despite its neutrality Taoiseach Eamon de Valera sent 13 fire engines and 70 men to help with the terrible aftermath.

Councillor Dudgeon, who proposed a memorial almost four years ago, strove desperately to avoid it being politically contentious, and a private charity offered £100,00 towards the cost. But Sinn Fein, SDLP and Alliance have been holding it up, using it as a bargaining chip in getting more nationalist and female images.

Declan Boyle, Pat Convery and Kate Mullan – who left the SDLP over freedom-of-conscience issues – were consistently strong in supporting this non-sectarian project, which may go through because Alliance is now abstaining. But as the historian Brian Barton puts it, ” the protracted party infighting and disputation that this matter has generated… is a grave indictment of its political leadership”.

Still, with the collapse of the Executive and Sinn Fein’s abstention from Westminster, councils are the only place to find political action these days.

Voters should be keeping a very keen eye on the webcasts.