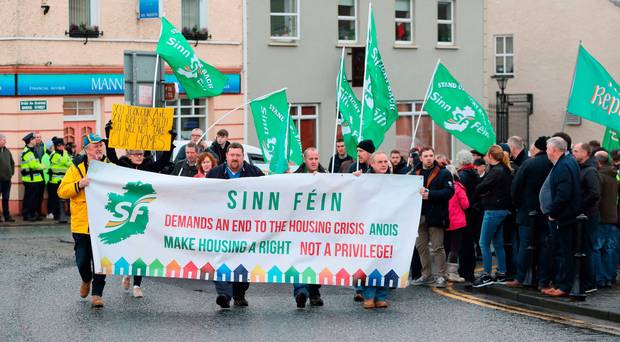 Never underestimate how much Ireland’s past can be used to endanger the present, writes Ruth Dudley Edwards 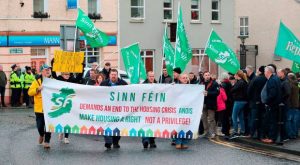 Protest over the eviction in Roscommon

There was a bizarre sequence of events last week at a bungalow near Strokestown in Roscommon that has got the Republic in a bit of an uproar, not least because it has stirred the tribal pot.

In the town centre the National Famine Museum exhibits the pistol used to assassinate the absentee landlord whose agent evicted 3,000 people at the beginning of the Great Hunger.

The truth that various journalists have been trying to piece together is complicated, but for dedicated tribalist grievance-mongers, it’s very simple.

As told by hysterical online publication Irish Republican News, it is an old familiar tale.

In its lead article, ‘The New Land War’, it describes how this house became “a battle zone last week after a brutal and illegal eviction of a farming family by hired loyalist mercenaries was dramatically overturned by a flying column of anti-eviction activists”.

In scenes “reminiscent of the 19th century, a pro-British eviction gang brutally assaulted a family in the west of Ireland while members of the 26-county Garda police looked on, without intervening”.

Those involved were one of the “Black and Tan eviction gangs” that have become “an increasing feature of Irish life” and “have the support of the gardai”.

They thought they had “vanquished the family and their neighbours, but centuries of Irish history were against them”, leading to the assembling of “a large number of anti-eviction activists, thought to have numbered at least 50 and from all four provinces of Ireland (who) bravely took them on in direct physical combat” and “stormed the house”.

They reckoned that “at least three members of the gang were injured and four of their vehicles were burnt, while two attack dogs had to be put down”.

But “public anger turned to joy for the liberation of the family home” and the family were reinstated.

The bald facts are that last Tuesday week, three siblings were evicted from their home on the authority of a court judgment issued in favour of the Belgian KBC Bank, owed more than €300,000 by Anthony McGann.

Far from “brutally assaulting a family”, eight security men guarding the house were attacked by about 20 men with baseball bats and a gun early the following Sunday, injuring some quite seriously and killing a dog.

Since 2009 Mr McGann has had several court judgments against him from a variety of banks, finance companies and the Revenue Commissioners.

KBC Bank has had a possession order for the property since 2013, but the relevant papers were not delivered to Mr McGann until December 9, telling him that the property had to be vacated on December 11.

Now, banks are not popular in Ireland – and even after a five-year delay it seems a bit harsh to chuck people out around Christmas with two days notice – but what we have here is a bank attempting to recover its property from people occupying it unlawfully.

Social media has been going mad, and there was a row in the Dail between Leo Varadkar and Sinn Fein’s Pearse Doherty, accused by the Taoiseach of letting his balaclava slip by his failure to condemn the violence.

Mr Doherty was in fact restrained compared to his Dail colleague Maurice Quinlivan, who has told KBC that Sinn Fein will not stand for anybody trying to evict a family from their home against their wishes.

Since these events there have been vandalism and arson attacks on KBC bank premises.

Some 161 properties were repossessed by lenders during the summer and most seem to happen peacefully, but a protest of about 1,500 people at Strokestown yesterday demanded unreasonably that henceforward there should be no forced evictions.

What is sinister is the tribal spin being put on all this.

Asked if he was “proud to be Irish”, one of the security men replied in a Northern accent: “I’m British.”

This has morphed into false allegations that these are “criminal loyalist” gangs associated with the UDA.

No one should be throwing fuel on this fire.