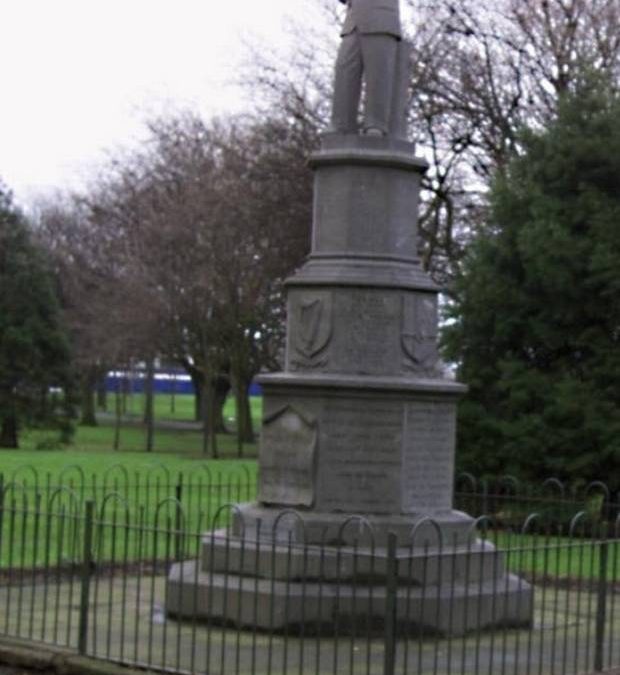 IRA: A statue of Sean Russell in Fairview Park, Dublin, was decapitated in 2005. Its replacement was also vandalised

‘I want to build a Belfast, which is a City for All,” wrote SDLP Councillor Tim Attwood in a recent letter to a Belfast newspaper, protesting about an attack in Belfast City Council on the late Paddy Devlin – one of those proposed by all parties except Sinn Fein as a suitable subject for a commemorative statue.

Now, statues have recently become contentious. They are torn down in South Africa if they are seen to commemorate racists or imperialists, Confederate statues are under threat in the American South, there was an attempt to get rid of Cecil Rhodes from Oriel College, Oxford (oddly enough, spearheaded by Rhodes scholars), and there is a long-running debate over a statue of Margaret Thatcher.

In some ways, that is the most ignoble episode. There are plenty of people who still hate Thatcher, but no one can deny that she was the first female prime minister, a figure who dominated the international stage and who at home won three elections, and certainly has a greater claim to stand in Parliament Square than, for instance, Lord Derby, who has been there since 1874.

She would have been there had Westminster Council not scrapped the plan last year because they feared “potential vandalism and civil disorder” from the hard left.

Her home town of Grantham will have that statue instead, though they’re talking of putting it on 10ft plinth.

This seems a great shame, since the British have been admirably relaxed about featuring contentious people in the public space.

I don’t think that any monarchs have complained about the statue of Cromwell that has stood outside Parliament since 1899.

We’ve had our share of vandalism in Ireland. King Billy and Nelson’s Pillar were among the statues blown up in the last century and Queen Victoria was first buried and then hidden on the University College Cork campus for years until she was spruced up in the 1990s and fit to be seen by her successor, Queen Elizabeth II, in 2011. And the Reverend George Walker, a hero of the Siege of Derry, is blown up or vandalised regularly.

I think historical statues should be left alone, though I admit to a certain ambivalence. There are limits.

I rejoiced when the Fairview statue of Sean Russell was decapitated in 2005, since he was chief of staff of the IRA when they declared war on the United Kingdom in alliance with Nazi Germany, set off 300 explosions in Britain, killed 10 people and injured almost 100.

We should never forget that while electioneering for the European Parliament in 2003, Mary Lou McDonald proved her Republican credentials by speaking at that statue alongside IRA Army Council member Brian Keenan, to commemorate the man who had died on a U-boat on his way back from Germany where he had had talks with Nazi Foreign Minister Joachim von Ribbentrop.

Nowadays, seeing how slippery is this particular slope, I think the answer is to keep the statues where they are, but with, where necessary, an attached plaque explaining why they’re controversial.

That, for instance, would deal with the tricky question of the statue in Newry of John Mitchel, who as well as being one of Patrick Pearse’s apostles of Irish nationalism, was a enthusiastic proponent of slavery.

Which takes me back to Belfast, where in an outbreak of sanity unionists and nationalist city councillors agreed not to take down statues, but instead to try redress the political balance by erecting some new ones to stand near those that reflect a predominantly white, male, Protestant and unionist history.

The idea was to make Belfast City Hall and its grounds, as Councillor Attwood put it, “more representative of all traditions, new and old” by acknowledging “the role of citizens of Belfast who have positively contributed to the social, political and civil life of Belfast through memorials in the front of CitIy Hall”.

He cited a number of suggestions – Grace Bannister (the first female lord mayor of Belfast); Robert McAdam (a Presbyterian devotee of the Irish language); Mary Anne McCracken (the radical sister of Henry Joy, a founder of the United Irishmen who was executed, after which she became a campaigner for social justice and led the women’s anti-slavery movement); Winifred Carney (a socialist and trade union official who acted as James Connolly’s secretary in the GPO); and Paddy Devlin (trade union organiser, one-time IRA member who became a campaigner for civil rights but split with the SDLP because he believed it had failed to become a genuinely non-sectarian labour party).

This selection, said Attwood, “would recognise the central contribution to Belfast of women, socialists, nationalists, republicans, trade unionists, civil rights, ethnic minorities and the Belfast role in the anti-slavery movement”.

But there is a permanent problem with Sinn Fein’s tunnel vision – which has been particularly noticeable during the four years when they did everything to block a memorial to the 900 people killed in 1941 in the Belfast Blitz. While they couldn’t challenge the fact that those bombs killed poor Catholics and Protestants alike, and though they failed in the end, they kept frustrating progress so as to use that memorial as a bargaining counter in their determination to get Winifred Carney a permanent statue.

And they refused to countenance a request that to sweeten the pill of having a revolutionary outside City Hall, her husband, a fellow socialist but an Orangeman and Ulster volunteer, should be included.

I’ve been following events at Belfast City Council for long enough now to know that Sinn Fein hate being thwarted in any way, but watching the webcast of the last council meeting I was shocked by the suppression of debate by the Sinn Fein Mayor, Deirdre Hargey, and the attitude displayed by her colleague, Ciaran Beattie, in his attack on Devlin, whom I believe they dislike because he refused to support the hunger strikes, opposed violence and was threatened and intimidated by the IRA.

Attwood, who can’t have liked Devlin’s attitude to his party, described him as “a punchy character, a republican, socialist, trade unionist and peace train activist who spent his life campaigning for civil rights, fairness and equality for all regardless of religious affiliation or political belief”.

Sinn Fein might at least, he said, have shown some respect to his family and the people who proposed.

“Sinn Fein appear to want their way or no way,” he ended. “It is the same old and out of date strategy of ourselves alone.”

How can anyone seriously contemplate going into government with them?