How can the government put a soldier in the dock while letting IRA killers go free? 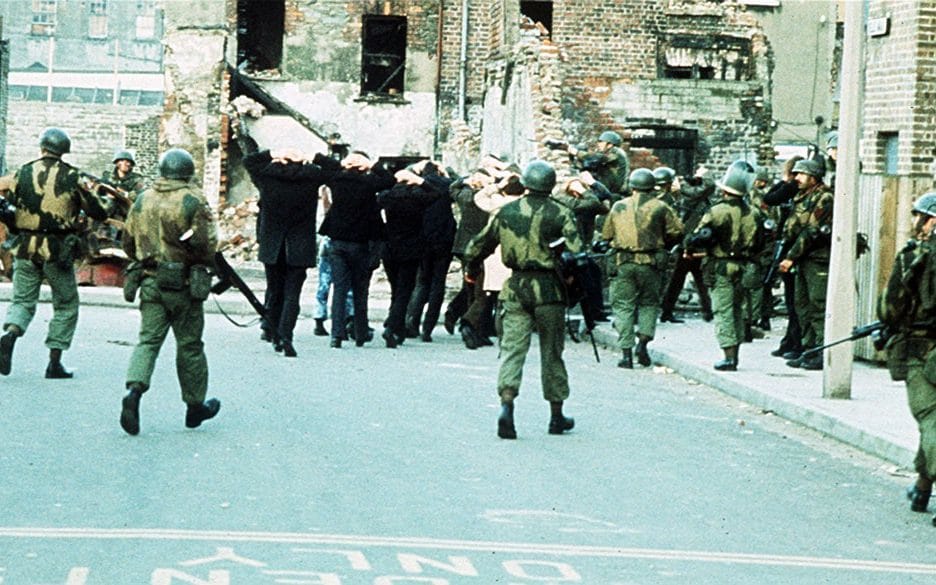 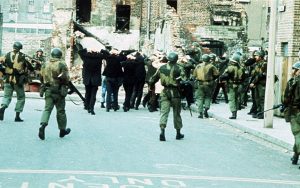 Scenes from Bloody Sunday in 1972

Most law-abiding people in Northern Ireland believe that anyone who committed a crime should be brought to justice – and that the terrible events of Bloody Sunday were inexcusable. What is causing enormous distress is the completely disproportionate treatment of the security forces.

Sinn Fein will inevitably respond to the news that one soldier has been charged with murder and attempted murder by encouraging the bereaved to feel angry that more aren’t being brought to court. As further evidence of the wickedness of the British government they will cite a stupid remark, made by the Northern Ireland Secretary Karen Bradley last week, that security forces killers were not committing crimes “but fulfilling their duty in a dignified and appropriate way.”

What isn’t being much quoted, though, is her accurate remark that “over 90 per cent of the killings during the Troubles were at the hands of terrorists [and] every single one of those was a crime.”

The figures speak for themselves. During the three decades of the Troubles, more than 3,600 people were killed, 60 per cent by republican paramilitaries (mostly the IRA), 30 per cent by loyalists and only 10 per cent by the security forces. Yet only 16 per cent of the victims of violence were paramilitaries, while 52 per cent were civilians and 32 per cent police and soldiers – the security forces who saved Northern Ireland from civil war. Except in a very few cases, which occurred mostly during the mayhem of the early 1970s, police and soldiers exercised extraordinary restraint.

As Republican leaders, the likes of Gerry Adams, demand more prosecutions, it is impossible not to think of all the mass murders that never ended up in court. Cases like Bloody Friday in July 1972, when nine people were killed and around 130 others injured by 22 IRA bombs; the carnage in the little village of Claudy ten days later when three bombs killed nine civilians; or the Enniskillen Remembrance Day bomb that killed three people in 1987.

There’s a long list of such atrocities and many today will be reflecting grimly on the mass murderers and their facilitators who, like Martin McGuinness, went scot free.

Irish Prime Minister Leo Varadkar has also been criticised over his support for a public inquiry into the murder by loyalists of IRA lawyer Pat Finucane, who has become something of a celebrity victim while no-one seems to remember the long list of judges, magistrates and barristers murdered by the IRA.

I’ve been covering Northern Ireland as a journalist since the early 1990s, and I’ve seen terrible tragedies and shocking injustices. Every day, people whose loved ones have been murdered by paramilitaries see in the street people they believe were the perpetrators. Because of the omerta among republicans and the absence of any written records, few have been charged – let alone convicted – but many also benefited from the Good Friday Agreement and served very short sentences. In the case of IRA ex-convicts, they are fêted as heroes and voted into positions of power in Ireland and abroad. It’s a feature of Northern Ireland that, while Protestants vote for bigots, Catholics vote for murderers.

One of the most sickening developments has been the hounding of the security forces, who have been relentlessly demonised by the republican propaganda machine and were regarded as suitable sacrifices on the altar of the peace process. Such was Tony Blair’s desperation to get Sinn Fein to join the power-sharing executive at Stormont that it became government policy to give moral equivalence to the bomber and his victims.

This has had wide-ranging ramifications, from the semi-amnesty On The Run letters dished out by Blair to republican terrorist suspects, to the 2006 Victims And Survivors Order (NI), which was disgracefully nodded through by Ian Paisley and the DUP despite making no distinction between victims and perpetrators.

The latest insult has been to make £55 million available for inquests into 93 deaths, of whom 40 were terrorists. There are 1,000 murders by terrorists that will get no such scrutiny. The Government’s offer to pay the legal costs of “Soldier F” does not go far towards making up for this.

As Sinn Fein orchestrates more protests over Bloody Sunday, all that should be borne in mind. Amorality rules.