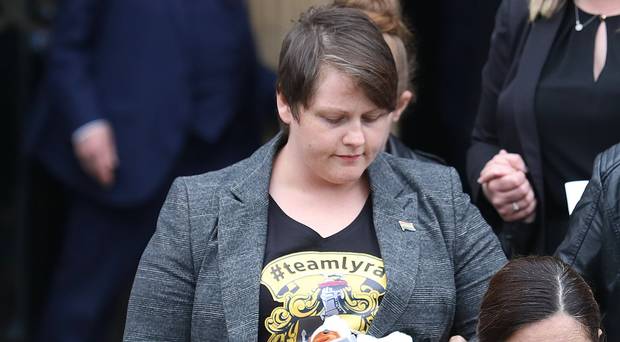 Romanticising those who murdered in the name of Ireland is no path to glory, writes Ruth Dudley Edwards 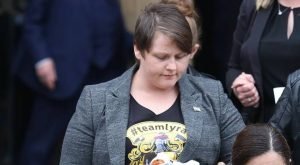 Sara Canning walks behind the coffin of her partner Lyra McKee

Sara Canning said last Wednesday evening on Channel 4 News: “No one’s going to tell me what I can and can’t say at this point.” Like her partner Lyra McKee, murdered on April 18 by the New IRA, Ms Canning does not go in for pussy-footing.

Having criticised politicians robustly for failing to provide a working government to address crises in hospitals and schools, she also took on terrorist godparents and fellow travellers.

Like Lyra, Sara is a good and practical woman who wants to make life better for everyone and who believes that this requires society to face uncomfortable truths.

So she addressed bluntly those who instigated the violence that killed Lyra and those who protect them.

And she did so in terms that should embarrass anyone who in any way excuses or condones ideological killers.

She had nothing but contempt for the “mealy-mouthed apologies and back-tracking and absolutely pathetic statements that were issued by Saoradh and the New IRA”.

Firing a gun at a crowd was not an “accidental shooting”. Nor were these people “defending anyone. They’re literally a scourge on their communities. They’re a scourge. They are a scourge”.

Evidence suggests that the gunman was probably a teenager, and Ms Canning spelled out starkly that there is nothing romantic about this.

Those behind the New IRA “are grooming young men and women … they speak out about paedophile gangs, but they’re no better than paedophiles”.

There are not many people in Northern Ireland who would have much time and sympathy for those who corral the young into criminal gangs, and there is little idolising of loyalist leaders who dealt in drugs while claiming to be defending the Union.

But the stark truth that republicans and their apologists keep dodging is that there is a long tradition of encouraging the young to become involved in violence by romanticising those who murdered in the name of Ireland.

It’s right to call that grooming.

Patrick Pearse, who is still widely venerated more than a century after he led an anti-democratic revolution that led to almost 500 deaths, injured close to 3,000, and brought misery to tens of thousands, was a gifted headmaster who groomed his pupils to think killing and dying for Ireland a glorious vocation.

By being awarded posthumous legitimisation, he and his co-conspirators became the patron saints of violent Irish nationalism, and generations have followed in their footsteps claiming a divine right to use guns and bombs to achieve their political goals.

I’ve been reading The Accidental Spy, Sean O’Driscoll’s biography of the American David Rupert, who would play a major part in the campaign to bring to justice those responsible for the 1998 Omagh bomb.

He describes one episode of the Real IRA’s revolting exploitation of youngsters from the Fianna Eireann boy scout group, revealed in 1999 after a Garda raid on an arms dump in Co Meath: “They threw down smoke bombs. One of the first to surrender was a crying, shaking 14-year-old boy who put his hands above his head.”

The child told them later “that he had been promised that he would learn some history and learn how to fire a gun”.

This pattern – repeated over and over again during the last century – has ruined innumerable lives and is still condoned.

Sara Canning is right. It is child abuse to hold up for adulation people like the 18-year-old medical student Kevin Barry, who in 1920 was executed for his part in the murder of three British soldiers.

It is child abuse to tell a young person that it is a glorious thing to die trying to force your neighbours at the point of a gun into a united Ireland.

And during their 30-year terrorist campaign, the Provisional IRA abused children when they gave them an appetite for violence, first through propaganda, then through encouragement to riot, and finally when they sent teenagers to military camps and put guns in their hands.

The New IRA groomers are following in a long, sick tradition.

As is anyone who supports or protects them.