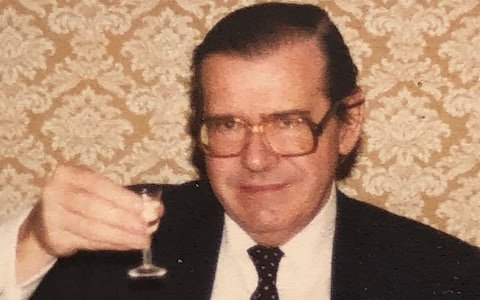 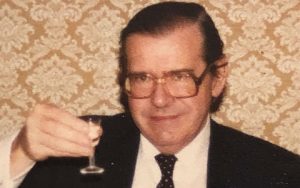 John Lippitt, who has died aged 90, was an unorthodox, swashbuckling civil servant who dominated British industrial policy in the 1970s and later became a commercial negotiator for GEC in China and South East Asia.

When in 1980 he was persuaded by Sir Arnold Weinstock to jump ship from the Department of Industry to GEC, the Observer described him as “shambling, belligerent, with immense energy and capacity for grasping details” and “very much a ‘doer’ with strong opinions of his own”. He described himself as “a real bomb thrower”.

Colleagues who found him overbearing were pleased to see him go. The more low-key Ron – later Lord – Dearing, disliked the menacing snarl of “get your tanks off my lawn, Dearing.” But he was greatly appreciated by his permanent secretary and friend, Sir Peter Carey, who shared his sense of the ridiculous, his passion for rescuing viable British companies and creating jobs – and his enjoyment of good food, wine, music, art, books, company and travel.

Lippitt was also an inspiration to what he called his Praetorian Guard, chosen, without regard for hierarchy, for qualities including common sense and nonconformity as well as availability for lengthy sessions in the Cardinal pub, Victoria, on a Friday evening.

A colleague three grades below him was summoned one afternoon to accompany Lippitt to a meeting at the Treasury where, in consequence of a convivial lunch, Lippitt fell asleep. She fought her departmental corner as long as she could, then kicked him awake, whereupon he listened to her summary of the discussion, saw off the opposition with his customary brutality and went back to sleep.

Another, even lower down the pecking order, received a telegram from Hong Kong: “I have just committed HMG to give £3.4 million from the aid budget to help build Castle Peak Power Station. Contract will help British industry. Find money by Tuesday. Lippitt.” It was found by Monday.

Weinstock had been impressed by Lippitt’s success as the lead negotiator in this and other ventures and brought him in to GEC as group director of exports (he would later join the board) to develop trade with China and the Far East.

Lippitt left government because although he liked and admired Margaret Thatcher and her Secretary of State for Industry Sir Keith Joseph, with both of whom he enjoyed intellectual sparring, as the author and a main implementer of the Industrial Act of 1972 that had introduced the concept of selective government assistance to manufacturing industry, he was frustrated by the new government’s reluctance to divert resources to manufacturing.

As someone who always lived well beyond his means, Lippitt was also attracted by the doubling of his salary, but even more by what he described as leaving the general staff to become a brigadier in the trenches fighting for British industry.

Before he left, Mrs Thatcher was said to have sent him via Weinstock a message saying he could have the permanent secretaryship of any government department and a knighthood, but Lippitt – wounded that she had not asked him directly – turned the offer down. 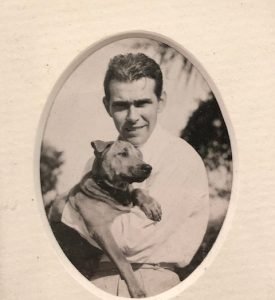 John Lippitt as a young man

Anthony John Lippitt was born in Sparkbrook, Birmingham, on May 6 1928. When he was eight, his mother was killed by a lorry as she was holding his hand crossing the road, and he had to run a long way to find his father, who was at church. As his son said at Lippitt’s funeral, this left him with a sense that he was “alone in the world and totally reliant on his own efforts to get on”; it also contributed to his secretiveness (he refused to be in Who’s Who) and selfishness – characteristics which he acknowledged unapologetically.

Brought up by modest and frugal relatives, he broadened his horizons through a scholarship to King Edward’s School, Birmingham, where he became an omnivorous reader of history and literature and was reprieved from expulsion for rebelliousness by his outstanding achievements academically and at cricket and rugby.

For National Service Lippitt chose the Navy as the best way of seeing the world, but his natural insubordination and trenchant complaints about the treatment of Commonwealth soldiers en route to Hong Kong resulted in a charge of mutiny that was ultimately dismissed by the Admiralty Board. 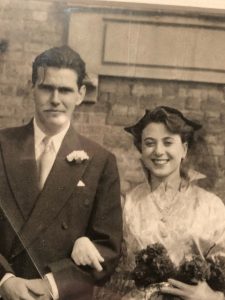 John Lippitt after his marriage to Gwenda Jones

At Magdalen College Oxford, where he read English, he financed his extravagances with the help of Gwenda Jones – a Stourbridge girl four years his junior whom he had met in the Birmingham Trocadero pub and with whom he cleaned up in Oxford at stud poker.

When Lippitt joined the Colonial Service, they married and went to Singapore, but the shrinkage of the overseas civil service caused their return in the late 1950s and they later settled in a cottage in Old Basing, Hampshire.

Back in England Lippitt’s social awkwardness and bluntness proved a bar to employment until he reluctantly took the Home Civil Service exam, came top in many papers and was despatched, first, to Customs and Excise and then to the Department of Economic Affairs set up by Harold Wilson in 1964. Later he moved to the Department of Trade and Industry, where he became a Deputy Secretary.

At GEC, Lippitt worked harmoniously with Weinstock. His knowledge and appreciation of the history and culture of the countries with which he dealt, and his patient but audacious negotiating skills, helped bring GEC great rewards.

These included participation in such projects as the Guangdong power station in China and the Pergau Dam in Malaysia, and in defence and high technology projects all over South East Asia that brought thousands of jobs to Marconi and the Yarrow shipyards. 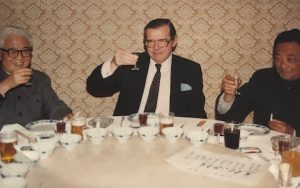 Lippitt negotiating with the Chinese

Lippitt was a tough negotiator; his Chinese counterparts gave him the nickname “the man behind the jade screen”; he once walked out of a Beijing meeting and had climbed the stairs of the aircraft when an emissary arrived to beg him to return. Asked at a party by a celebrity Left-wing professor what he did for a living, Lippitt growled: “I’m a Merchant of Death.”

In 1996 Weinstock retired and Lippitt set up the Malacca Straits Trading Company, representing several companies in familiar territories as well as in Brunei and Saudi Arabia. He chaired Aurelian Oil and Gas, an oil exploration company, from 2002 to 2006.

To oblige friends, in 2001 he became chairman of the Trustees of the Omagh Victims Legal Group, where for more than two years he steadied the nerves and raised the spirits of volunteers seeking to raise funds to finance a civil case against IRA bombers. 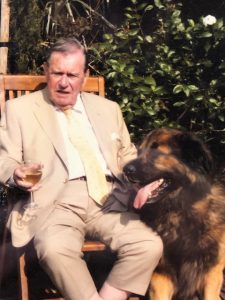 He retired at 80 and led a largely reclusive life reading, enjoying nature and art, and inveighing against politicians who annoyed him on television.

John Lippitt was appointed CB in 1979.

His wife Gwenda died in 2004 and a daughter also predeceased him. He is survived by another daughter and a son.