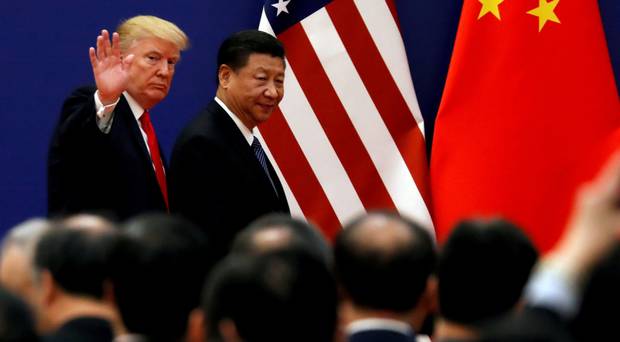 The Left flaunts its utter hypocrisy with its views of President Trump and President Xi, writes Ruth Dudley Edwards 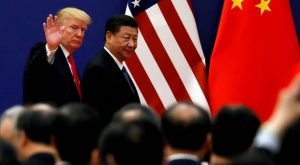 US President Donald Trump and President XI of China

When I was growing up in Roman Catholic Dublin in the 1950s and 1960s, the people my circle and I used to find most infuriating were the “craw-thumpers”.

These were the chest-beaters who seized every opportunity to publicly advertise their piety and moral superiority.

It often went in tandem with hypocrisy.

A classic example would be a woman who ostentatiously went to Mass every day, tut-tutted at every opportunity about the immodest dress of the young and any other perceived sins, and flaunted her selflessness and humility in confession, as in “Father, I sinned by uttering a sharp word when I was faint from fasting and praying all day for the souls in Purgatory and my husband came home drunk again and robbed the housekeeping money out of my bag so I can’t feed the children”.

It was particularly hard to bear when the craw-thumpers were public figures with discreditable private lives.

Charles Haughey – who would be Taoiseach three times between 1979 and 1992 – was the most cynical of the corrupt, adulterous politicians who pretended to be model citizens, faithful husbands and devout Catholics.

With a general election due at a time when there was widespread gossip about Haughey’s mysteriously acquired wealth and his well-known mistress, a social diarist who was the separated wife of a senior judge, Haughey put in a fine craw-thumping performance by having himself photographed kneeling humbly at the communion rail between his wife and his mother.

These days, now that religion is no longer popular in most nationalist circles, craw-thumpers have been replaced by virtue-signallers, who demonstrate their moral superiority at every opportunity – especially on social media – by denouncing others for racism, sexism, Islamophobia, transphobia or whatever is most upsetting progressives these days.

They’re now massing to denounce Donald Trump’s proposed visit to Ireland to spend a couple of days at his hotel and golf resort in Doonbeg in Co Clare.

The leaders of the pack are predictable. First out of the trap was Labour Senator Aodhan O Riordain, who is hoping to regain his Dail seat.

When a Trump visit was predicted in 2016, O Riordain achieved popularity with idiots on Twitter by describing the President as a “fascist” and a “monster” who should be kept out of Ireland.

Now he’s following fashion by leading with Trump’s resistance to “climate action”. Apparently, all “peace-loving democrats” must oppose his visit.

The twist from People Before Profit TD Richard Boyd Barrett is that Trump is a “climate saboteur”, a “warmonger” and a “sexist”.

Various other politicians are sitting uncomfortably on the fence by stressing how much they disapprove of Trump while opposing banning him since they realise that would be potentially ruinous for a country that had $446bn in US investment in 2017.

Leo Varadkar is squirming uncomfortably by welcoming Trump to Ireland while explaining that in a democracy “protest is allowed and is welcome”.

The case for Trump is made most eloquently by politicians and business people in Clare who point out that it is his money that has created 300 jobs at Doonbeg and another 1.000 in the wider community and that he will be warmly welcomed.

Billy Chambers, a local Fianna Fail councillor, told demonstrators “to stay above at home and mind their business because we don’t go from Clare to demonstrate above in Dublin against any foreign dignitary that we have differences with”.

He pointed out that as “the head of the most powerful country in the world… he deserves our respect”.

Just a suggestion to Mr Chambers and his allies. Isn’t it time to point out the absence of protests when at various times recently President Xi and other senior members of the Chinese Government visited Ireland? Yet apart from buying up and exploiting vulnerable countries, China uses fraud and theft to strengthen its power, and its ruthless treatment of political dissent has included the imprisonment of about a million Uighurs in a mega-concentration camp in an attempt to brainwash them into renouncing their culture.

The simple truth is that to treat Donald Trump with disrespect if he visits Ireland is an insult to his country and its citizens.

Another is that, compared to Xi, he’s a saint.

Virtue-signalling is no pastime for a serious politician.