Alliance Party success has weakened both moderate nationalism and unionism

For the sake of Ireland, Naomi Long needs to avoid being entrapped by Sinn Fein, writes Ruth Dudley Edwards 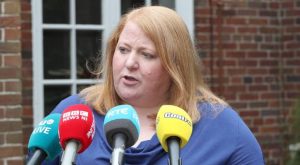 He had been watching the BBC’s The View as Martina Anderson “made major supportive eyes” at Naomi Long.

For “contrary to what gullible commentators told you, Alliance is not some alternative new dawn heralding the rise of a liberal centre in Northern politics”.

In fact, he said, Alliance had just weakened the real centre in Northern Ireland by taking votes from the UUP and SDLP.

Harris’s analysis was that Sinn Fein was therefore seeing Alliance “as a party of what Lenin would call ‘useful idiots’, a Trojan Horse that can be used for ‘dialogue’ of the sort favoured by lions in dialogues with lambs”.

And that was before Alliance scored a mighty victory in the EU elections at the end of May.

I agree with Harris. The relationship between Alliance and Sinn Fein on Belfast City Council has been making me nervous for a long time.

Sinn Fein has plenty of lamb-like patter when it comes to the “progressive” policies that so appeal to Alliance, and is adept at making common cause with it over the necessity to prevail over unionist “dinosaurs” in the interests of human rights, equality and love.

The truth of course is that its “progressiveness” is as new and shallow as its enthusiasm for the EU.

Until very recently the Sinn Fein leadership was opposed to all abortion, cared nothing about same-sex marriage, and maintained its unblemished record in opposing the EU since the accession of the Republic and UK in 1973.

But it made swift policy changes in the interests of wooing a young nationalist electorate that throughout the island was turning its back on the beliefs of its parents and was fanatically pro-EU.

What Sinn Fein really cares about is the rewriting of history to justify the IRA’s bloody, failed murder campaign, the persecution of the security forces that saved Ireland from outright civil war, the eradication of any manifestations of British culture and the achievement somehow of a united Ireland run from the Felons Club.

As Harris pointed out, the problem with Alliance’s success is that “centrist parties, like the UUP and the SDLP, have been bulwarks against extremism in Northern Ireland, just as Fianna Fail and Fine Gael have been in the Republic”.

He added grimly: “Disturb at your peril.”

The good news, of course, for those of us who recognise Sinn Fein for what it is, is its dreadful electoral performance, but it is already busy on the mischief-making trail of subverting Alliance further, for, as with “progressive” policies, its views on Brexit seem identical and Sinn Fein is talking that up.

Mrs Long reported on an important meeting on her first day in Brussels at which she was accompanied by Sinn Fein MEP Matt Carty: “Constructive meeting today with @MichelBarnier to discuss Brexit.

“I stressed Remain is still possible, and by far the best outcome.

“Patience is required. And, If Brexit proceeds, the withdrawal agreement incl. backstop are minimum necessary to protect our economy and the #GFA.”

For good measure she explained in an interview that Boris Johnson was an opportunist who had just used Brexit “as a mechanism to become Prime Minister”.

Yesterday Harris pointed out that although the DUP has made it clear that it would settle for a reasonable compromise of a time-limited backstop, no one is listening down south, where the Taoiseach and his cheerleaders – whose ignorance about unionist opinion is exceeded only by their inability to understand the English – refuse to contemplate budging.

He also pointed out rightly that a Prime Minister Boris Johnson “will crash Britain out of Europe rather than retreat on the backstop”.

The Brexit campaign would have failed without Johnson: retreat would mean an electoral bloodbath.

Mrs Long would do well to dodge the deadly Sinn Fein “supportive eyes” and start listening to Brexiteers.