As we remember D-Day, let us not forget the sacrifices made by the security forces in Northern Ireland 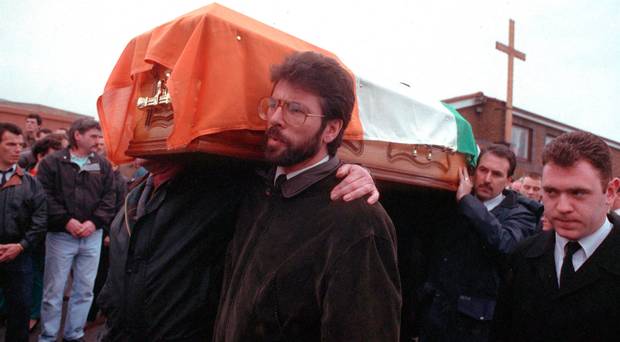 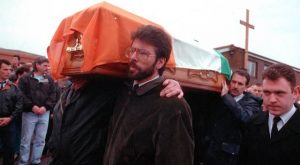 We’ve had a week being reminded of what we owe those who fought on and after D-Day to defeat the Nazis. We’ve also had another #TimeForTruth march orchestrated by Sinn Fein that called for immediate implementation of legacy mechanisms known to be skewed against the security forces.

So it’s a good moment to remember who the good and bad people were during the Northern Ireland Troubles.

I’ve been reading two recent books by Ken Wharton, a former soldier who served two tours in Northern Ireland between 1971 and 1973.

He was angered that his former comrades in Northern Ireland were a “forgotten army”, that Sinn Fein was “rewriting the history of the Troubles to gloss over the IRA campaign”, and that so little was written from the perspective of soldiers and police.

One reason, as the writer and broadcaster Mark Urban writes in the foreword to Blood and Broken Glass: Northern Ireland’s Violent Countdown Towards Peace, 1991-1993, was that until the late 1980s journalists were actively discouraged by the Ministry of Defence from accompanying soldiers on the streets and writing about their experiences.

In more than a decade chronicling Operation Banner, the British Armed Forces’ operation between 1969 and 1971, Wharton has done a lot to fill the gap, not least because ex-members of the security forces or their bereaved relatives trusted him with their stories.

“A mate of mine was horribly injured in an IRA bomb in Belfast,” one soldier told him. “He was in pieces with arms over there and legs in the opposite direction.

“But the thing that chokes me up, geezer, is that he was still alive and in agony.

“I just cuddled him as best I could, but he was crying red tears and coughing up blood, trying to speak.

“I just prayed to God that he would die and when he did, I just felt guilty but relieved.”

He was speaking in 1991 after a report of the IRA’s Irish Patricia Black and English Frank Ryan, blown up in St Albans by the their own bomb as they set out to murder army bandsmen.

“That Irish b**** and the English boy died instantly,” he said. “Flash of white, no pain, nothing. I wish those two b******* could have died the same agonising way as my mate did.”

In 2016 Black was eulogised after a republican parade that included children in berets and sunglasses.

Featured with Mairead Farrell and two other women in an IRA mural, they were described by then Sinn Fein MLA Jennifer McCann as “our heroes and our inspiration”.

Wharton reminds us that in addition to those recorded as having been murdered, there were many hundreds of others killed indirectly by terrorists when they committed suicide because of their life-destroying injuries or horrendous depression arising from PTSD.

Yet there is much in their stories that is uplifting. Wharton quotes Alistair Hodgson, who in 1992, at 21, stood on an IRA booby-trap. Horribly wounded and in excruciating pain he begged a comrade to shoot him .

He would survive a double amputation, a pelvis shattered in 18 places and many other injuries, to become within 10 years one of the world’s top skydivers.

There are, of course, terrible tales of the butchering of civilians.

In 1987, 18-year-old Samuel Hopkins, a Catholic, was assaulted by loyalists in the Shankill Road area: the breezeblock they dropped on his head left him with epilepsy, violent headaches and the mentality of a child.

In 1993, he was abducted by a UVF paramilitary and ferociously beaten and kicked to death.

The daughter of Bridie Glennon, who died of a heart attack in December 1993 after being evacuated by the RUC as the army tried to deal with a massive bomb, spoke for innocent mourners everywhere.

“All I can say is thanks to the brave boys on both sides, the nationalist and loyalist paramilitaries… thanks, brave men – for what? For murdering my mother. I’ll never forgive you for what you have done… Never-never!”

At the end of his other recent book, Torn Apart: Fifty Years of the Troubles, 1969-2019, Wharton put it succinctly.

“The graves of those who lost their lives in the Troubles bear silent testimony to the utter bankruptcy of the paramilitaries’ philosophy of violence.”