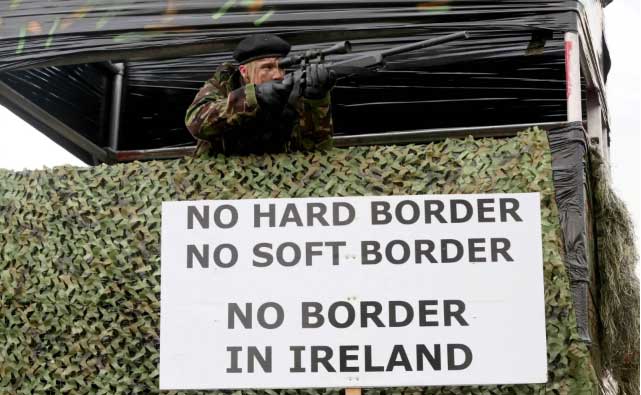 If our new PM remains resolute, he may yet unravel the torturous Irish border conundrum 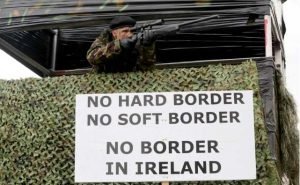 There are, as yet, precious few signs of either the Dublin establishment or Northern Irish nationalists sharing Prime Minister Johnson’s sunny optimism about a renegotiated withdrawal agreement that can make everyone happy. For now they’re continuing to cling to the belief that he is a disorganised buffoon, as they would a comfort blanket. But that’s not to say that this position will not change.

The Prime Minister so far has done exactly what is required of him in trying to solve his pressing problems in Ireland, which is to speak softly and carry a big stick. If he can maintain the early momentum he has set in realigning the British Government towards Brexit at all costs, then Taoiseach Leo Varadkar and others will soon have to revise their positions.

In his dealings with the Republic, Mr Johnson needs to remember that the people there love being loved just as much as he does. He will face obduracy and hostility from politicians and abuse in the media, but this should be tempered by the knowledge that his celebrity status and sense of humour have won him many Irish fans over the years. A brief visit to Dublin, with a customary dash of charm, would get him a long way and a rapport with the Irish people would make it trickier for Varadkar to keep up his tough talk.

When it comes to Northern Ireland, the PM should at all costs avoid more than the briefest of whistlestop tours and then shake the dust of the island off his feet and leave it for now to Julian Smith. This poor man is moving from the horrors of being Chief Whip of a split party dependent on a confidence-and-supply agreement with the DUP, to dealing as Secretary of State for Northern Ireland with a collection of political parties north and south that are mostly furious with the new British government.

A visit to Dublin might help Boris Johnson’s build a rapport with the Irish people, making it trickier for Varadkar to keep up his tough talk 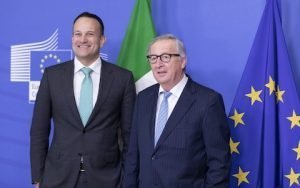 He has, however, one great thing in his favour. The only issue on which the Northern Irish political parties all agree is that his predecessor, Karen Bradley, was probably the province’s worst Secretary of State ever. In fact, by praising her in the House of Commons yesterday, Mr Johnson provoked widespread derision. Appointing a new SoS may have been an obvious move, but it was still a shrewd one.

Simply offering a new face and a different perspective may be enough for Mr Smith to start making some progress on the issues currently sitting in his in-tray. He needs to deal swiftly with a range of urgent problems that Ms Bradley ignored, keep the DUP happy, mollify the other political parties and prepare the ground for direct rule if the stand-off with Sinn Fein continues. On the Brexit front, he must step up no-deal plans while trying to persuade those in the Irish government who are open to talks that the backstop can be superseded without either loss of face or a hard border.

In case anyone thinks that’s easy, here’s where the parties stand. Arlene Foster of the DUP looks forward to London, Brussels and Dublin working for a sensible deal while the smaller unionist party, the UUP, believes “A deal can be done, but only if the political leaders involved get down off their soapboxes.”

Mary Lou McDonald, president of Sinn Fein, has already told the Prime Minister that “The people of the North” (Sinn Fein never use the term Northern Ireland) “voted to remain within the EU and that vote must be respected.” Colum Eastwood, leader of the smaller nationalist party, the SDLP, seeks to outdo her in belligerence: “Bloated with bluff, but short on solutions, he must face the reality that no amount of flag-waving or saccharine patriotic populism will resolve the challenges Brexit poses.”

In Mr Johnson’s favour is the fact that, down in Dublin, there is barely-concealed terror at the possibility of no deal. A huge amount of the Republic’s trade is either done direct with the UK or is reliant on the use of Britain as a “land bridge” to the continent and any disruption would likely prove a disaster for the Irish economy.

The establishment there has held firm so far because they believe Britain would sacrifice Northern Ireland quicker than the EU would sacrifice Ireland. If Mr Johnson remains resolute in his defence of the Union and his commitment to leaving without a deal if necessary this conviction may just start to falter. If it does, we may see Varadkar and others beginning to soften their position.

They may be helped along the way by the arguments laid out by Lord Trimble. A key architect of the Good Friday Agreement which all nationalists believe is threatened by the backstop, he has offered a potential lifeline in his recent convincing essay on how the backstop will contravene and actually wreck the GFA. The problem, he says, can actually be solved through its intergovernmental mechanism.

Convincing the Irish of all this will not be easy. Varadkar still says the notion that a new deal could be negotiated is “totally not in the real world” while the leader of the Opposition, Micheál Martin, says Mr Johnson as Prime Minister “raises enormous fears” for the future of Anglo-Irish relations and British policy towards Northern Ireland. The EU’s promises to the Republic may yet outweigh the strength of Mr Johnson’s commitment either to Northern Ireland or to no deal.

Whatever happens, the Irish government will struggle politically to row back from the tough stance it has taken. But with Boris Johnson in Number 10 and Julian Smith in the Northern Ireland Office, there may just be a glimmer of hope for MPs desperate to find a way out of the backstop impasse