Devolution has been an abject failure, not just in Northern Ireland, but also in Edinburgh and Cardiff 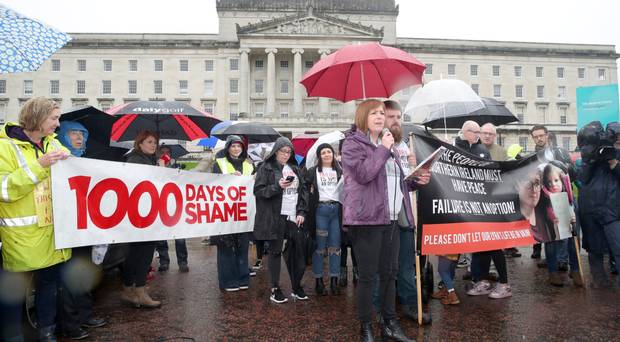 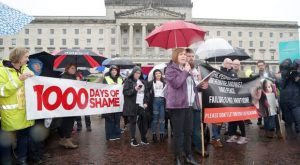 Protesters attend the We Deserve Better rally at Stormont last month. It was held to mark the passing of 1,000 days since the collapse of devolution

One of the attractive things about the fictional crime world is that regardless of our politics, most writers and readers tend to focus on what we have in common and get on very well.

For me, this was a happy rest from the bearpit of Brexit punch-ups.

Additionally, since Indiana is Trump country – and its last governor was the now vice President Mike Pence – I knew that as a Leave voter I was likely to have a safe passage in Muncie, Indiana, where last Monday I gave a talk about Britain, Ireland and the EU.

The audience were intelligent, interested and polite and the main reaction in public and in private was wonderment that any country would wish to give up its sovereignty.

I had a similar cheering experience on Saturday morning at the huge Battle of Ideas Festival run annually in London by the Academy of Ideas, this time on a panel called ‘What is the future of the Union?’, which included English, Scots and Welsh.

As always in these forums, the audience were well-informed and engaged in open, constructive dialogue, free of personal abuse.

There was little optimism, though, and much agreement on a lot of negative perceptions about what has been going on in the devolved areas.

It was a pretty uncontentious view that devolution has failed, and the reasons were a mixture of incompetence, irresponsibility, Anglophobia and the tendency of the most talented to head for opportunities in London rather than get involved in local politics.

In all the devolved countries key issues like education and the NHS are badly managed compared to non-devolved England.

In Wales (which voted 47% Remain), where Labour has dominated, its failures have led to a slight rise in the numbers of those wanting Welsh independence from the United Kingdom within the European Union.

In Scotland (which voted 62% Remain), where since 2007 the SNP – who want Scots independence within the EU – the failure is as great, although less obvious.

Welsh leaders have been short on charisma: Scotland, however, has had Alex Salmond and Nicola Sturgeon, who both used emotional rhetoric to cover up their deficiencies as First Ministers

There was much agreement that the authoritarian SNP are anti-poor in, for instance, their criminalisation of cheap alcohol, popular football songs and non-harmful smacking.

As in Northern Ireland, and indeed, in Blair’s England, self-styled progressives can be frightful bullies who show contempt for those whom they consider backward.

Northern Ireland, which we didn’t touch on much since devolution is in the freezer, simply doesn’t work because of – as the constitutional expert on the panel pointed out – the deadly flaw of the institutionalised sectarianism in the Good Friday Agreement (that, as Seamus Mallon and David Trimble wanted, could have withered away had Tony Blair’s appeasement of the extremes not destroyed the centre).

Like Indiana Republicans, there was bafflement as to why Irish, Scots and Welsh nationalists want independence from the United Kingdom, yet wish to surrender it to Brussels.

Similarly, bearing in mind that the English taxpayer massively subsidises Scotland, Northern Ireland and Wales, why would any but extreme nationalists vote for independence from the UK?

And why should the English put up with being abused and exploited by greedy Anglophobes?

Being a constructive crew, there was general agreement between panel and audience that what is necessary is a radical root-and-branch overhaul of the constitution.

There was a representative there from the independent Constitution Reform Group (https://www.constitutionreformgroup.co.uk), which has come up with a draft new Act of Union that proposes a new constitutional settlement designed for the 21st century and beyond to guarantee the rights and autonomy of each constituent nation and region within a reformed UK. Its chairman, Lord Salisbury, recently told the Welsh Assembly’s Constitutional and Legislative Affairs Committee that a coherent settlement needs to be negotiated by all four parts of the UK “on equal terms and as equal partners”.

Could anyone reasonable object to making that a major priority for the whole nation?