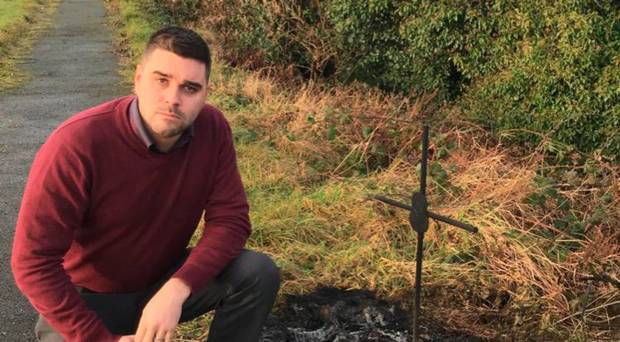 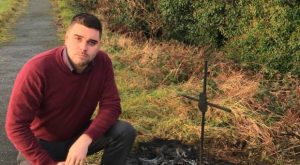 January 6 was the 40th anniversary of the murder of three UDR men: Robert Smith, an 18-year-old Protestant, and two 21-year-olds, the Protestant Richard Wilson and James Cochrane, the eighth Catholic UDR member to be killed. “He died for his country,” said his mother.

Last Monday some former friends and comrades placed a simple temporary memorial at Burrenbridge, Co Down, the site of the fatal explosion. Its modest predecessor had been destroyed in 1996, a couple of weeks after being constructed, to the devastation of Mrs Cochrane.

“It was a simple memorial, not offensive to anyone. I would not destroy anything belonging to anyone else, certainly not commemorating the dead,” she said.

Almost a quarter of a century later the replacement memorial was torched.

“It was a dignified and respectful way to mark the site where three young men lost their lives,” said local UUP councillor Alan Lewis.

“It was harming or offending no one.”

But it was offending the haters, who haven’t gone away, you know.

Following the Sinn Fein lead, they were out in force last week, north and south, because Minister for Justice Charlie Flanagan had had the effrontery to plan an event at Dublin Castle to remember those who served in the Royal Irish Constabulary and the Dublin Metropolitan Police from 1822 and 1836 respectively until 1922 and independence.

Most of them were Irish Catholics, of whom many were constitutional nationalists. Their job was to keep the peace in their communities.

Mr Flanagan was conscious, during this Decade of Centenaries, that the families of these policemen had not only had to endure the killings of hundreds of them, but their demonisation for almost a century afterwards.

He also presumably thought it would be a graceful symbol of how far we have come on the island that the Garda Commissioner Drew Harris, one-time Deputy Chief Constable of the PSNI, whose father was murdered by the IRA, would be saying a few words of commemoration.

He had reckoned without the blind hatred which one can find in unexpected quarters and the malevolence of social media in spreading fake news and foam-flecked comparisons between the police and the Nazis.

I was one of those who found it impossible to persuade critics that what was involved was a commemoration, not a celebration, and that there was no intention of including the Black and Tans and the Auxiliaries, who were bolted onto the RIC at a time of carnage and, in many cases, behaved appallingly.

Consider these contributions from a Northern Irish Facebook friend of mine of some years, with whom I get on with fine if we stay off politics. We’ve even had an amicable meeting in real life.

In one recent discussion on my (free speech) Facebook page, ‘Bean’ had been agreeing with a unionist about the importance of civility and mutual respect.

“What a place we could live in if we could all get on together,” he wrote eloquently. “I respect your place and you respect mine. Personally, I go out of my way to experience, to the best of my ability, Orange parades and marches and it does me no harm.

“Irish language and the GAA will do you no harm. Live and let live.”

But when it was announced that Dublin City Council had voted to boycott what they described as an “obscene event” which was “an affront to generations of patriots who struggled to end centuries of imperial tyranny”, his comment was: “Congratulations, Dublin City Council. What sort of f***wit would salute these vermin and their chums in the Black and Tans.”

“It has been an interesting week,” tweeted the sardonic Adjacent Possible, after days of venom and malevolence on social media.

Someone “who used to be a legitimate target, according to PIRA” and now engages in “countering propaganda narratives”, he spoke of “recreational bigotry”, adding: “A particular type of knuckle-dragger doing a grand job of sabotaging plans for a united Ireland.”

As the BBC correspondent and Kerryman Fergal Keane wrote: “The families of RUC members killed in the Troubles may watch this debate and wonder what place for the memory of their loved ones in a new Ireland.”