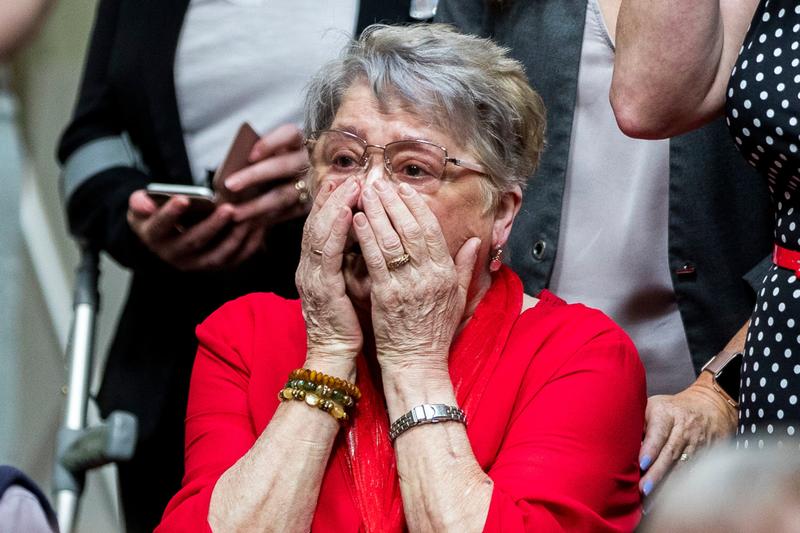 The bullet, or the bomb, that murders one person does incalculable damage to so many more people, writes Ruth Dudley Edwards 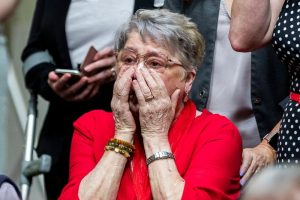 Joan McKee, mother of Lyra, who was murdered by dissident republicans

I have a terrible memory for faces, but I’ve never forgotten the image of Lyra McKee’s mother, Joan, as she waved me off from her doorstep last year. I’m still haunted by her expression, which combined extraordinary sweetness, overwhelming sadness and worrying vulnerability.

Joan was an invalid and I thought then that she would not survive for long. As her daughter, Nichola McKee Corner, put it yesterday, she “passed away last night of a broken heart. Unable to live without her baby Lyra.

“Hold Lyra in your arms, reunited once more, and send us strength.”

In so many of the tributes from family and friends on social media, mixed with the grief at the loss of Joan, there is a very strong sense of relief that her suffering is over and she’s back with her beloved wee Lyra, who was her loving carer.

All Lyra’s friends knew how she adored her mum. Many’s the time I sat with her in London, talking for a few hours, resigned to the conversation being regularly punctuated by calls home beginning, “Are you okay?” followed by anxious inquiries about what pills Joan had taken and what food she had eaten.

In my experience, Joan never called her: she was always anxious that Lyra would have a nice time and not worry about her. But the deep devotion was two-way: the daughter had learned about unconditional love from the mother.

Innumerable people have been moved by Lyra’s story in an open letter to her 14-year-old self about how, after experiencing gay friends being rejected by their families, she had marshalled her courage to come out to her mother.

After she had confessed and tearfully apologised and Joan had responded with gratitude that the news was not that she was pregnant, Lyra crawled into her lap, sobbing, “as she holds you and tells you that you are her little girl and how could you ever think that anything would make her love you any less?”

“That’s terribly sad news,” tweeted David Kerr, who, from 1998, as press secretary to David Trimble, had plenty of experience of tragedy. “I recall the comment in the Lost Lives programme a few weeks ago: sometimes those bullets just keep travelling.”

And so they do. The bullet, or the bomb, that kills one person does incalculable damage to so many more. To our shame, we often forget about the wounded, especially when their injuries are mental, rather than physical.

Over several years of working with victims of the 1998 Omagh bomb, who took a successful civil case against the bombers, I came to understand a lot about the ripple effect.

People would say what a terrible tragedy for his parents, her husband, or their children, but there was very little understanding that a violent, intentional killing is devastating to family, friends, colleagues, neighbours and onlookers.

It doesn’t matter if the person who died wasn’t the actual target.

It is no consolation to any of those who mourn Lyra that her murderer was aiming at a policeman.

I have never forgotten the evidence of Dr Nick Cooling, the psychiatrist who assessed the condition of the Omagh plaintiffs in 2000.

Think of the households immediately concerned, who had to cope with each other’s symptoms, exacerbated in many cases by senseless, but powerful, guilt.

Victor Barker, for instance, blamed himself for not being with his 12-year-old son, James, when he most needed his father; his wife, Donna-Maria, blamed herself, because she had inspired a move from England to Donegal.

Michael Gallagher blamed himself for recommending that his son, Aidan, use a particular car park; and Edith White tortured herself, because she had let her husband and son do the shopping that day.

And then there were the siblings who, like many young people, suffered from survivor guilt and asked themselves why they were alive when their brother or sister was dead.

In some cases, that led to attempted suicides, another horror with which other broken people had to cope. Families were fractured and previously happy people were condemned to a lifetime of misery.

At least the New IRA recognised they had made a mistake, so, on this occasion, the bereaved did not have to endure the demonisation of the person who had been murdered.

One of the most unforgivable aspects of the IRA’s decades of terrorism is its leaders’ deliberate policy of trashing the reputations of those they have killed, thus compounding the agony of those who loved them.

It has been a deliberate part of the brainwashing of followers to eradicate any empathy, or remorse, by telling them lies and teaching them hatred. That is psychopathic behaviour.

Being a psychopath means never having to face the wrong you have done to others.

In the case of Lyra, even the New IRA couldn’t see her as the enemy. To them, her death was an embarrassment. But, in their eyes – as with the Provos over all those years of killing innocents – she was simply collateral damage in their just war.

“The b******s who murdered my baby sister should also be tried for the murder of my mother,” tweeted Nichola. “They killed her the day they killed her precious baby girl.”

“One bullet that is still travelling,” tweeted @GrantSana. “So desperately sad.”

Lyra’s murderers will be remembered as agents of hate. But, as I’ve written before about Lyra, and it also applies to Joan, it is Philip Larkin’s famous line that always comes to my mind: “What will survive of us is love.”