Palestinians can only be seen as victims and the Israelis as oppressors in its view, writes Ruth Dudley-Edwards 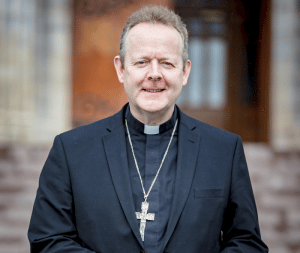 Two recent happenings made an unexpected connection for me very recently. One was an intensification of the campaign to have the next Irish government endorse the anti-Israel “Occupied Territories” Bill and its support by some vociferously anti-Israel Jews.

The second was the reverential coverage of the late Martin McGuinness’s 70th birthday on Saturday.

Now I’m rather partial to the company of Jews since no one could ever accuse them of having a herd mentality.  Rather like Presbyterians, they argue with each other constantly.

Fond though I am of my native country, the Republic of Ireland, its domination by a tribe that is culturally Roman Catholic had the unfortunate result of encouraging groupthink.

When I was growing up in Ireland, there was absolute loyalty to the church and the physical force tradition of Irish nationalism. These days, that herd has turned against the church and now objects when anyone challenges the new fdeology of progressive secularism.

And although it prides itself on its cosmopolitanism and now prostrates itself at the altar of dialogue and consensus on the national question, that herd is prone to outbreaks of  Anglophobia and sneaking regard for the IRA.

Roman Catholic clergy are so cowed these days that with few exceptions, they mostly scamper along with the herd.

Gone are the days of great churchmen of integrity like Bishop Edward Daly who not only believed in the tenets of their church but stood up publicly to condemn political violence on the straightforward grounds that murder was murder and should be neither excused nor tolerated.

Yet when McGuinness died in 2017 luminaries of the Catholic Church like Daly’s successor Bishop Donal McKeown and Archbishop Eamon Martin participated in a service that granted a mass murderer the reverence due to a democratic statesman.

Those who want to know the story, will find it in this account by repentant IRA terrorist Shane O’Doherty: https://irishpeaceprocess.blog/2020/04/30/bishop-edward-daly-vs-the-ira/.

McGuinness was one of those IRA leaders who found it convenient in the name of caring for oppressed Palestinians to add Israel to the hate list.

This successfully wound up loyalists, so we saw two tribes who are profoundly ignorant of the Middle East adopting the colours of two lots of combatants they wouldn’t be able to tell apart.

Irish nationalists have a tendency to see foreign affairs lazily.  And like their president, they have an affection for celebrity left-wing dictators.

There is no appetite for grasping complexities.   It’s much easier to find a team to love and a team to hate.

With their skills and shamelessness as propagandists and their unrivalled ability to tell a story in black and white, Sinn Fein have been busy for years selling a Dummy’s guide that  paints the Palestinians as victims and the Israelis as oppressors who should be international pariahs.

It leaves out such salient facts as that in the hope of making peace, tiny Israel, which is surrounded by enemies, voluntarily quit a prospering Gaza which its new rulers Hamas promptly impoverished  by spending all its resources on weaponry,  that Hamas, like  Iran’s Hezbollah and various other Arab militant groups, are intent on wiping out Israel  and make the lives of many residents a nightmare  by constant bombardment, that Israel expands its territory only for defensive purposes, and that Egypt, like Israel, blockades Gaza to stop the importation of materials for weapon manufacture and permits food and medical supplies.

Shinners who whinge about the cruel shortage of road signs in Irish say nothing about, for instance, the slaughter of Christians in Muslim countries or the imprisonment of more than a million Uighurs in Chinese re-education camps geared to eradicating their culture.

The anti-Israel lobby has a wishlist including stopping selling it arms, buying goods from its settlements or blockading Gaza.

Sinn Fein, the Greens and Fianna Fail are gung-ho in support of the Occupied Territories Bill.  Still, although Fine Gael is buttering up Arabs in the hope of being elected to the Security Council, being in government they are inhibited by the knowledge that the bill is illegal under EU law and would impoverish a vast number of Palestinian workers.

Any change of a grown-up debate, I wonder?