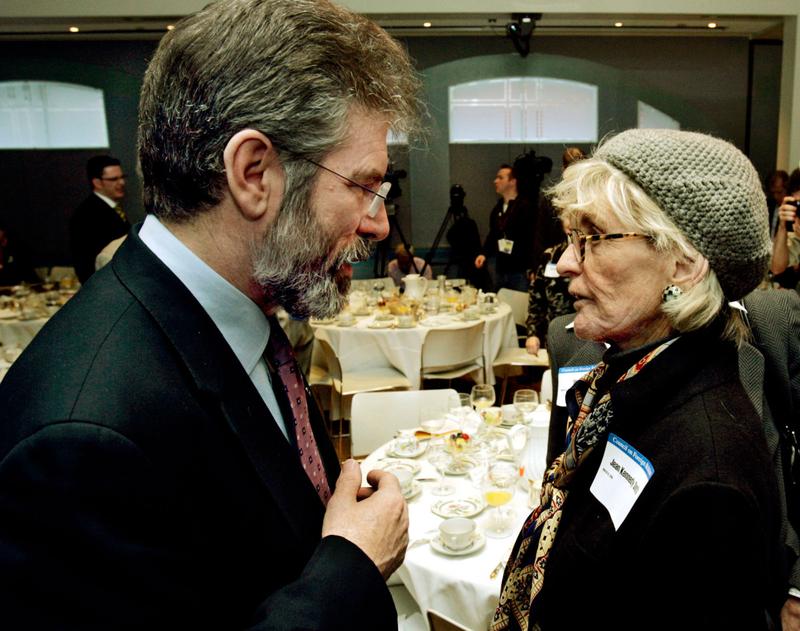 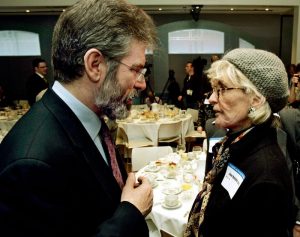 Regretting the death of Jean Kennedy Smith, US Ambassador to Ireland from 1993 for five years, who died last Wednesday in Manhattan aged 92, President Michael D Higgins said she would “be forever remembered as the diplomat who had a sense of history and of what had influenced the Irish in the United States”.

The problem was that her sense of Irish history owed a great deal to her Brit-hating brother Ted and her great friend Tim Pat Coogan.

And according to Mr Coogan, Father Alec Reid, the Redemptorist priest from Clonard Monastery, became a key confidant.

Father Reid famously said that the Northern Ireland nationalist community were treated “almost like animals by the unionist community”.

In the words of Shane Paul O’Doherty, who has written excoriatingly in his always fascinating irishpeaceprocess blog, like his Clonard friend Father Gerry Reynolds, Father Reid “had bought into the IRA’s legitimacy arguments lock, stock and car bomb”.

Mr Coogan claims Father Reid called Mrs Kennedy Smith the “spéir bhean”, a mythical beautiful woman, who in poetry personified Ireland, and as ambassador she certainly appeared to wish to do that.

She was, said Sinn Fein president Mary Lou McDonald, a “valuable conduit to the White House and the US Congress”.

She had been a well-known socialite and effective philanthropist when she was made ambassador, but as the New York Times obituary put it: “She knew little about diplomacy, Irish politics with the intricacies of the sectarian violence known as the Troubles.”

She got the job because President Bill Clinton owed Edward Kennedy a favour. Irish nationalists were, of course, thrilled with her appointment. Such is the devotion to the assassinated President John F. Kennedy that mosaics of him and 1916 leader Patrick Pearse pray on either side of a representation of the risen Christ in Galway Cathedral.

“An activist diplomat,” Higgins explained approvingly, for he is in the same mould, Kennedy Smith “was not afraid to break with convention or explore the limits of her mandate”.

Smith therefore defied the State Department and the US ambassador in London by visiting Northern Ireland without permission and repeatedly meeting Gerry Adams, and with her brother’s help, persuading Clinton to give Adams a US visa for the first time in 1994.

Seen by permanent staff as a bully, when two senior staff members of her embassy recorded their disagreement with her policy on the grounds her activities were harmful to American interests, she dismissed them.

All this caused ructions with Secretary of State Warren Christopher, but Smith sailed on unperturbed as Adams developed a massive fan base in America.

Depending on your point of view, this is variously seen as a positive step in the peace process, or yet another stepping stone on the path of appeasement of terrorism.

Mr Coogan exulted that “the White House acquired a patina of green. The relationship turned out to be 22 carat shamrock”. Irish politicians who care about democracy and the rule of law and see how respectability has helped Sinn Fein prosper on both sides of the border might secretly agree with the latter view. When Kennedy Smith left the post in 1998 she was made an honorary citizen of Ireland.

At the time she said: “I was a cog, really, in the machine that was moving. I was fortunate to be here to perhaps add momentum to what was happening.”

“She has left her mark on our history, our peace process and her legacy lives on across Ireland,” said Ms McDonald.

Perhaps she should be immortalised in a mosaic in Clonard Monastery, praying opposite Martin McGuinness.